Is it Time to Reexamine the Standard Model of Particle Physics? 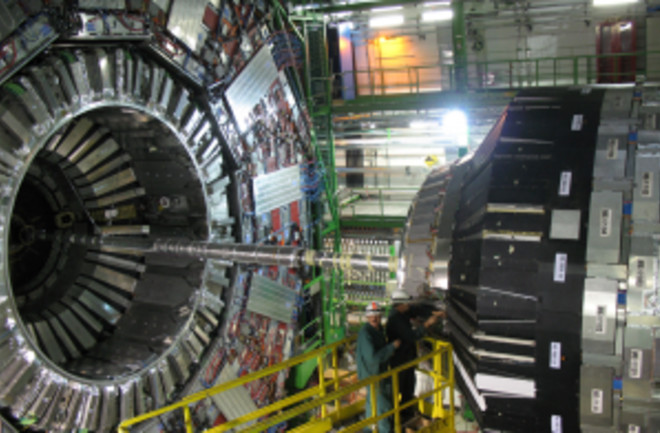 Fermilab’s Tevatron, the largest particle accelerator in the United States, was shut down on September 30 after a celebrated career of 28 years that has provided us with some of the greatest discoveries in particle physics.

This leaves the European lab CERN (see photo on left) to lead the way into future discoveries with its Large Hadron Collider. This landmark in experimental physics is an opportunity to reexamine the theoretical model physicists have constructed and relied on in their search to understand the workings of the universe: the standard model of particle physics.

The standard model is a comprehensive theory about nature's elementary particles and the forces that control their behavior, and it has been constructed over a half-century of intensive work by many theoretical physicists as well as experimentalists.

The model has worked amazingly well, harmoniously combining theory and experiments and producing extremely accurate predictions about the behavior of particles and forces. But could the model now be beginning to show some cracks?

It all started on a wintry evening in 1928. While staring at the flames in the fireplace at St. John’s College, Cambridge, Paul Dirac made one of the most important discoveries in the history of science when he saw how to combine the Schrödinger equation of quantum mechanics with Einstein’s special (but not general) theory of relativity.

This achievement launched relativistic quantum field theory—which forms the theoretical basis for the standard model—and produced two immediate consequences: an explanation of the spin of the electron, and Dirac’s stunning prediction of the existence of antimatter (confirmed a few years later with the discovery of the positron). In the late 1940s, Richard Feynman, Julian Schwinger, and Sin-Itiro Tomonaga, all working independently, presented the first quantum field theory, called quantum electrodynamics, which explained the electromagnetic interactions of electrons and photons. It forms the first part of the standard model by handling interactions that are controlled by the electromagnetic field.

The theory’s success inspired other theoretical physicists to construct similar quantum field theories for addressing the actions of the weak and strong nuclear forces—thus together accounting for everything in particle physics except for the action of gravity, the subject of Einstein’s general theory of relativity. By the 1970s, the result, the standard model, was ready: a quantum field theory of all elementary particles -- leptons and quarks and their interactions through the actions of particles (such as the photon) called bosons. Experiments using increasingly more powerful particle accelerators at Stanford, Brookhaven, Fermilab, and CERN over the years have led to the discoveries of a “zoo” of particles, all of them and their interactions explainable by the model.

The standard model, whose underlying mathematics is steeped in the notion of symmetry, led in two new directions: one was the postulation of what is now known as the Higgs mechanism—acting through a Higgs boson—to “break the symmetry” in order to give elementary particles their mass. (The assumption is that there was a primeval "symmetry" under which all particles were massless--the "broken symmetry," through the Higgs mechanism, leaves the photon massless but gives mass to other particles.) And the second, called supersymmetry, was an attempt to extend the inherent mathematical symmetry of the standard model into a larger framework that would include yet-undiscovered particles that may identify the mysterious “dark matter” believed to permeate galaxies.

It is for the goals of finding the Higgs and discovering at least one new particle predicted by supersymmetry, that the Large Hadron Collider (LHC)—a colossal project costing over $10 billion—was built by CERN between Switzerland and France near Geneva. The LHC began its operations (at half its maximum energy) on March 30, 2010, and in the year and a half since then, has provided invaluable new information about the particles and forces of the standard model.

But to the surprise of many physicists it has so far failed completely in discovering either a Higgs boson or any particles predicted by supersymmetry. To add to the conundrum, a related project that uses particle collisions at CERN to create neutrinos sent through the earth to Italy has led to the bizarre finding—seriously doubted by most physicists—that neutrinos, leptons explainable by the standard model, may travel at speeds greater than that of light.

These wholly unexpected findings place the old standard model in new light. Its extension into supersymmetry is all but dead; the Higgs idea—central to the model—may have to be replaced by an alternative mass-endowing mechanism; and neutrinos and their behavior would have to be thoroughly reexamined. While the first two-thirds of the last century has been the age of great theories in physics, the present era may well belong to the experimentalists—for they are the ones most likely to provide us with answers to the big questions.

Amir D. Aczel is a researcher at the Center for the Philosophy and History of Science at Boston University and the author of 18 books about mathematics and physics, as well as numerous research articles. He is a Guggenheim Fellow and a frequent commentator on science in the media.