Is Earth's Magnetic Field Heading for a 'Big Flip'? Probably Not (Right Now) 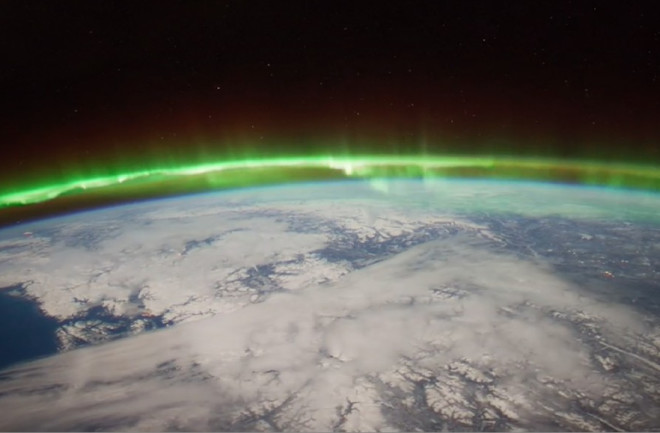 'Aurora over the Earth. <a href='https:

Before we get started, let’s have a cheer for Earth’s magnetic field! I would guess most of you never give it a second thought, unless you’re watching the Northern Lights or maybe using a compass. However, things would be very different on Earth if we didn’t have a magnetic field. But some people fear that the Earth’s magnetic field might be headed for a big change that could bring chaos to modern society, but are their fears well-founded?

To tackle that question we need to start with a different one: What generates Earth’s magnetic field anyway?

It is a dynamo!

Earth’s interior is layered, and the innermost layers comprise a solid iron-nickel inner core and a liquid iron-nickel outer core. That outer core isn’t sitting still; it convects thanks to temperature and density differences across the outer core, along with Earth’s rotation. This generates cells of motion in the outer core—moving liquid metal!

And what happens when you pass a current through liquid, moving metal? You generate a magnetic field! That initial current comes from the fact that charged particles from the sun (called solar winds) generate a magnetic field when interacting with Earth early in its history, which started the dynamo. Since then, it has been self-sustaining, so long as that outer core keeps on convecting.

That magnetic field generates Earth’s magnetosphere (below), the space around the planet where its magnetic field prevails. This shield of sorts keeps most of the solar winds from getting any closer than maybe 4 Earth radii from the surface—other than at the poles where the magnetic field lines intersect Earth’s surface. The solar wind particles that sneak through and make it to the poles are what generates aurora in our atmosphere.

Other planets aren’t so lucky. Venus, which is similar to Earth in size, seems to lack a convecting liquid core; instead, the entire core is liquid, so no thermal gradient exists. This means Venus has a weak magnetic field caused by solar winds interacting with the thick Venutian atmosphere. Mars also lacks a strong magnetic field, which may be a major reason its atmosphere lost oxygen and carbon dioxide as solar winds bombarded the planet.

A diagram of the Earth's magnetosphere, showing where our magnetic field runs the show. <a href='https://commons.wikimedia.org/wiki/File:Structure_of_the_magnetosphere_mod.svg' target='_blank'>Wikipedia</a>.

Now, Earth’s magnetic field hasn’t always been stable. It goes through two types of changes: reversals and excursions. During a reversal, the polarity of the magnetic field flips, so your compass needle would point toward the South Pole rather than the North Pole. An excursion is just a period when the magnetic field gets wonky, so compass needles might not even work. Geologists and geophysicists don’t really know why the magnetic field on Earth (and elsewhere) flips. One hypothesis is that something in the outer core changes occasionally. What’s more, there isn’t a pattern to the reversals—some are brief while others can last tens of millions years. The current “normal” configuration we’re in is one of the longer ones — only 14 percent have been longer — and we’ve been in it for the last 780,000 years.

When reversals do occur, the magnetic field gets pretty weird. Looking at the record of magnetic field variations written in rocks (called “paleomagnetism“), it appears that, for perhaps centuries to millennia before and after a reversal, the magnetic field drops in strength to maybe 10 percent of what we have today. The poles also, more or less, vanish as the field switches from its current northern polarity to southern polarity. In a sense, Earth’s shields go down for a while.

Why is that bad? First off, the lack of protection from solar winds and cosmic rays generated in deep space means higher levels of radiation reach Earth’s surface. Combine that with erosion of the ozone layer, which allows more ultraviolet rays from the sun, and we’re talking higher rates of skin cancer and the potential for other mutations. Now, there is no known mass extinction directly tied to a reversal, but there is evidence that tiny sea creatures called radiolaria have died out during some reversals, which could impact marine ecosystems.

Beyond the biological impact, the loss of a strong magnetic field would fray the fabric of our modern society. Satellites would be disabled or destroyed, the electrical grid could fail during solar flares and communication lines could be broken. Combine the potential loss of GPS satellites and the magnetic North Pole, and navigation becomes that much more complicated—back to using the stars? That sort of potential for global disruption in communication and power would likely mean many deaths and who knows what else.

So today, things are good, right? Well, that’s where it gets tricky. Measurements of the strength and location of Earth’s magnetic field imply that it has been changing a lot over the past 1,000 years or more. Evidence suggests the strength of the field has diminished by 50 percent over the last millennium. Also, over the last century, the magnetic North Pole has moved a lot, sometimes as much as 40 kilometers per year to the north. This “polar wander” means that compasses aren’t pointing to the same place they were 30 years ago. Does this mean the magnetic field is entering one of these periods of instability prior to a reversal?

The magnetic field may have decreased in strength, but comparatively speaking, it is still over twice has high as it has been in other periods, so we’re not approaching any dire lack of protection. What we might be seeing is an excursion rather than a reversal event, where the magnetic field gets more unstable and possibly weaker for hundreds to thousands of years, but then returns to its previous configuration. And although our current polarity has been around for quite a long time, we can’t say we’re “due” for a reversal because we don’t even know how often they occur.

That being said, the magnetic field will reverse at some point. Although it might not be a geologic catastrophe that’s often hyped in various reports, it is something that we might need to consider as an event that would bring global instability. However, for now, we’re still safe in our magnetic bubble generated by our dynamic Earth.