Is a Hotdog a Sandwich? Science Finally Has The Answer

The statistical physics of phase transitions has solved one of science's greatest conundrums (cough). 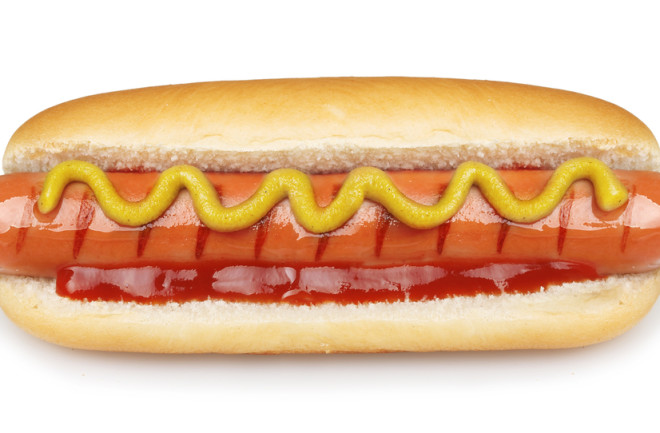 Some of the great unanswered questions in science are often the simplest and most familiar. What is the nature of consciousness; how did the universe begin and why is there life on Earth; are all examples. Here is another that has long puzzled scientists: is a hotdog a sandwich?

Now Madelyn Leembruggen and Caroline Martin at Harvard University in Cambridge say they have solved this question thanks to an approach based on the statistical physics of phase transitions. “To remove any of the reader’s lingering uncertainty: yes, a hotdog is a sandwich,” they conclude.

At the heart of their work is the classification of food in three categories or phases: soup, salad and sandwich. They then explore the transitions from one phase to another to construct a complete phase diagram. “We fully map out the phase space of the soup-salad-sandwich (Triple S) transitions,” say the researchers.

They distinguish between soups and salads based on pore size and the penetration depth of the embedding matrix. “If the bulkiest components of the dish form a scaffold, then the ability of the remaining ingredients to efficiently permeate this scaffold determines the phase of the dish,” say Leembruggen and Martin.

For example, an identical set of ingredients can exist as a chunky salad, a salsa or gazpacho, depending on how finely they are diced. This demonstrates a complete transition from salad phase to soup phase.

By contrast, the sandwich axis of this space depends on the existence of a carbohydrate enclosure. The extent of this enclosure can vary dramatically from cheese on toast, to cheese sandwich to cheese calzone.

This approach allows the research to map out the full soup-salad-sandwich phase space along several axes. And it throws new light on the question “is this a soup, a salad or a sandwich?”. “Most of the time, the answer you blurt out with the least amount of thought is the most true,” they conclude.

All this leads to a simple way to solve the long-standing hotdog conundrum. “The research question is: Can you pick it up by the carb and eat it? If so, the dish is a sandwich,” say Leembruggen and Martin.

A fascinating result that joins a rich tradition of scientific papers published on 1 April.

This year, astronomers have also been hard at work in this respect. For example, John Paice at the University of Manchester in the UK and J Watkins have been studying the rate of exoplanet discovery, which has been doubling every 39 months or so, with the number currently sitting at about 5000.

Their focus is on the consequences, should this rate continue far into the future. ”We posit that due to the finite nature of space in the milky way it will become increasingly likely that one of these exoplanets will be found within our solar system,” they say.

Indeed, they calculate that the odds of this happening become more likely than not on Friday 9 December 2146. The discovery of such a planet will undoubtedly be a wonderful day for astronomers.

This future discovery is only matched in its significance by the first detection of the entirely new phenomenon of “exop(lan)ets” by Sabina Sagynbayeva, an astronomer at Stony Brook University in New York, and colleagues.

The team have characterized the properties of these objects using the same methods they use for exoplanetary transits in front of their host stars. It turns out exopet transits are commonly observed during Zoom calls and the team have used a citizen science program to gather a new dataset of sixty-two events.

The researchers point out that the phenomenon has come about because of the widespread change in working practices following the emergence of Covid-19. “Although human reactions to Zoom have been mixed, most agree that the discovery of exopets has been a highlight of this new work-from-home way of life,” they say.

They go on to describe a seven-phase model for exopets observations. This begins with “ingress” as the exopet enters view, then the main portion of transit across the screen followed by egress “either by the pet’s own volition or via removal by its host astronomer.” These phases are usually followed by an apology from the host astronomer and then a return of the exopet with a secondary transit and egress.

The team have analyzed the observations as a whole and conclude that “these exopets are seen at wide size and mass ranges, and exist around a variety of hosts.”

Howling At The Moon

Finally, Michael Lund at the California Institute of Technology in Pasadena provides a detailed study of lycanthropy and where else in the universe it is likely to be observed.

A key consideration for this kind of transmography is the brightness of the full moon. So Lund asks which of the population of 5000 known exoplanets are likely to experience similar conditions.

Of course, the nature of all these 5000 exoplanets is not well known. So ignoring any for which details about the host star or the planet itself are missing leaves a list of only 301. Then filtering out any gaseous planets or ones significantly larger than Earth leaves just 38 candidate exoplanets.

Lund concludes that as many as “80-85 per cent of terrestrial planets appear capable of hosting a moon capably of triggering lycanthropy.” In these cases, the brightness of the full moon will depend on factors such as the size of the moon in the exoplanet’s night sky, its proximity to the host star, its reflectance and so on.

And one exoplanet sticks out as an object of considerable interest as far as lycanthropy goes: LHS 1140 b. This is an Earth-like planet orbiting inside the habitable zone of a red dwarf just 40 light years away.

Lund goes on to set out important plans to observe this and other potential candidates in more detail. “We believe this represents a major step forward in our understanding and recognition of the burgeoning field of exocryptozoology,” he concludes.

Lund has submitted his paper to the prestigious journal Acta Prima Aprilia.

What’s for Lunch? A systematic ordering of foods in the Soup-Salad-Sandwich phase space: arxiv.org/abs/2203.16580

On the Possibility of Discovering Exoplanets within our Solar System: arxiv.org/abs/2203.17075

First Detections of Exop(lan)ets: Observations and Follow-Ups of the Floofiest Transits on Zoom: arxiv.org/abs/2203.17185

Other papers of interest

COWS all tHE way Down (COWSHED) I: Could cow based planetoids support methane atmospheres? : arxiv.org/abs/2203.16609

Social distancing between particles and objects in the Universe: arxiv.org/abs/2203.16982