Irradiated Meteors May Have Delivered Earth's Ingredients for Life 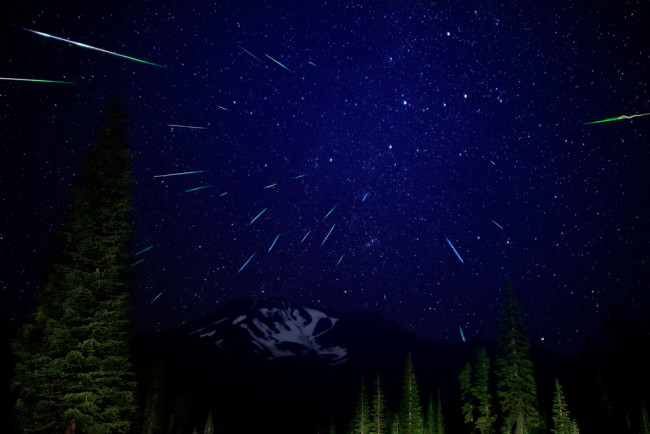 Radiation-blasted meteors may serve as the universe’s cosmic crockpots, slowly cooking ingredients needed to spark life, scientists say in a new study. One of the most ubiquitous substances in the universe is a molecule called formamide. Clouds of formamide thousands of light years wide have been detected in interstellar space — so, basically, it’s everywhere. And when researchers blasted high-energy protons at a mixture of powdered meteorites and liquid formamide, the combination yielded all of the fundamental building blocks — except phosphates — necessary for life. The results challenge theories of how life began here on Earth, and widen the range of scenarios in which life could emerge elsewhere in the universe.

Scientists studying life's origins believe formamide is essential for life to take root. With the appropriate catalysts, such as high temperatures and the proper mix of minerals, formamide can yield the molecular components of DNA and RNA, amino acids, carbolic acids and more. Because of this, formamide is one of the most intensively studied precursors for life. Czech researchers recently demonstrated that exposing formamide to high temperatures — like an explosive impact with Earth — could create all the molecular compounds in our DNA. But scientists from Italy and Russia have now demonstrated that thermal energy might not be the only catalyst that sets the machinery of life into motion. Ionizing radiation from the Sun, or any other star, can also do the same trick. In other words, life’s ingredients started cooking long before they reached Earth.

To test their theory, scientists ground up four different classes of meteorites and mixed them with liquid formamide. They kept the samples in temperatures that mimicked the extreme cold of space, and then irradiated them with a proton laser. The laser simulated a solar wind typically belched out by the Sun. Close examination of the samples afterwards revealed the presence of nucleobases, carboxylic acids, sugars, amino acids nucleosides — nearly everything needed for life to emerge. Researchers published their findings Monday in Proceedings of the National Academy of Sciences. Their findings indicate that the basics of life may have been delivered to Earth by meteorites carrying formamide that had been exposed to solar winds. When these molecules were exposed to phosphates — inorganic minerals commonly found on the surface of planetary bodies — that form the spine of the DNA double-helix, life could take root. Given the abundance of formamide, meteors and solar winds, scientists believe this relatively simple process could be happening throughout the universe; thus, expanding the number of places where life could exist. Finding the raw materials for life, it seems, is rather simple. However, as we know from years of searching, life itself is another matter.