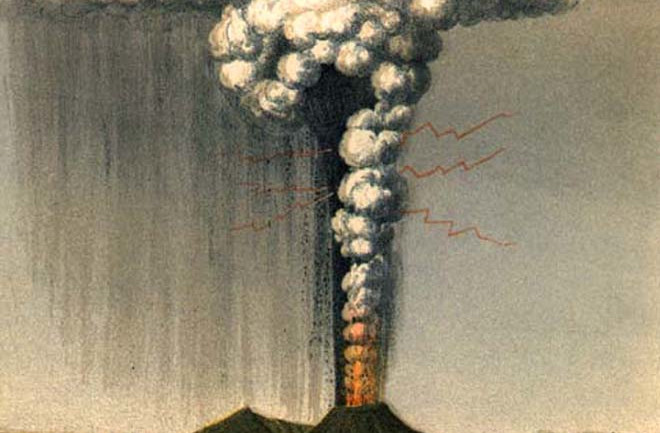 Artist depiction of the 1822 eruption of Vesuvius, showing the classic "Plinian" column - a great place to start a scale on volcanic eruptions. Image: Drawing by George Julius Poulett Scrope / Wikimedia Commons. Let's be blunt: we've reached a point where we need a new way to discuss and compare volcanic eruptions. Too many times do I run into articles talking about "supervolcanoes" and "mega-eruptions" and honestly, those words all mean very little. They don't tell us anything about the size or style of the eruption (or volcano itself). They really are media-driven vocabulary that is just there to sensationalize. I've tried to tackle my relationship with "supervolcanoes" and "supereruptions", but mostly resigned myself to the idea that we're stuck with this terminology for better or worse. But wait, I think we can do better! We can construct a way to talk about different size eruptions in a (mostly) quantitative way that doesn't require thinking in log units (at least not directly) and let's us compare eruptions of all styles. Right now, the predominant way to compare volcanic eruptions is using the Volcanic Explosivity Index (VEI), a standard designed to be like the Richter scale for earthquakes but instead using the volume of erupted volcanic tephra (volcanic debris). This is all well and good when you want to compare explosive eruptions, but once we start adding in effusive eruptions like lava flows, it gets dicey. The VEI is a good start, but hardly intuitive for the general public or media. There have also been some forays into looking at volcanic eruption magnitude, calculating a value based on column height and ash dispersal, but again, hardly intuitive. So, what do I suggest? A metric scale for volcanic eruptions. Now, being an American, I know this country's love/hate relationship with the metric system, but you know what? Anyone who dislikes like the metric system is wrong, so I'm going to move past that issue right away. The great thing about the metric system is the use of prefixes to identify relationships between relative sizes. A kilometer is 1000 times larger than a meter. A centimeter is 100 times smaller than a meter. Know your prefixes, you're (mostly) all set. The key is figuring out how to calibrate your scale.

The metric system is great. Would you like a decaslice or deciloaf? Image: Veganbaking.net / Wikimedia Commons. Well, what is the most famous style of eruption? I've venture to say a Plinian eruption is the most famous (see above), those eruptions that produce umbrella-shaped plumes and gained their name from the observations made by Pliny the Younger during the 79 A.D. eruption of Vesuvius. Now that eruption had a volume of ~1 cubic kilometer. This seems like a great place to center our new metric scale. Now, I pondered what to name these eruptive units. How about a something like a "Pliny"? Some of the metric units are named after famous figures in the field they are related, so how about trying that in this case? If you look up "famous volcanologists" on Google, pretty much the first wave of hits are either David Johnston, who died monitoring St. Helens prior to the 1980 eruption, or the Kraffts, who died during an eruption of Unzen in 1991. Some other names that come up include Harry Glicken, Peter Francis, Richard Fisher, Thomas Jaggar, Howell Williams -- all worthy candidates. The Kraffts seems like logical choices here, though, for their work filming eruptions and educating people on volcanic hazards through their work. However, I just can't get behind adding new terminology to the discussion. That would just end of confusing people. Could we just call it an "eruption"? This would mean an "eruption", which talking about the volume of material expelled, is ~1 cubic kilometer. Now, as with the metric system, we could just add numbers to get at volumes between the scale markers, but for now, let's just think about how this might work. The scale would break down something like this:

The eastern wall of the Crater Lake caldera, formed during its decaruption ~7700 years before present. Image: Erik Klemetti Where does this system break down? Well, on two fronts as I see it:

This system would hopefully solve some of issues of slapping "super-" or "mega-" in front of any large volcanic eruption. Sure, you still get to add a prefix, but now it has meaning. The last kiloruption at Yellowstone would actually signify an order of magnitude of the eruption relative to the 79 AD eruption of Vesuvius. You could quickly compare relative volumes of eruptions (at least in a broad sense, unless you do add the aforementioned numbers before the name, e.g., "the ~5 decaruption event at Mazama"). I'm sure there are problems with this scale, but at least it is a start at trying to make the relative volumes of eruptions more understandable to the general public and the media, and hopefully can get us to back off on overuse of unnecessary (and overdramatic) terminology.