Insight Has Given Us a New View of Mars 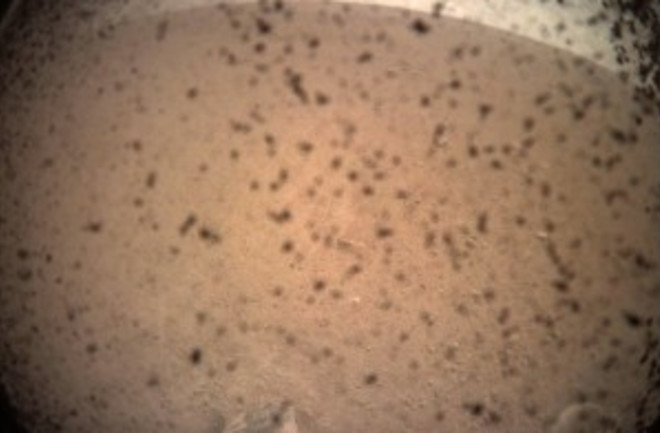 Insight's first image of Mars. NASA. NASA’s InSight lander reached Mars yesterday. It's the seventh successful landed mission, and it's the latest in our continuous presence on the red planet since 1997. Yup, we've had a rover or a lander doing science on Mars non stop for over 20 years! But landers like InSight don't get enough love. They seem less exciting than their roving cousins, but these stationary missions have done some really incredible science. Regardless of the goal of a mission, though, every lander has had a camera on board to show us details of a new part of Mars. I don't care how many pictures of Mars I look at, there's always something amazing about the first picture from a mission. That camera is on a spacecraft that survived a violent launch, a two-year trip through space spanning some 30 million miles, and a fall through the Martian atmosphere. After all that it still managed to turn on and show us what it can see within minutes of reaching the surface. It's incredible. So let’s take a quick look at the first views of past landers. Viking

The first ever image of the surface of Mars seen from Viking 1. NASA. The twin Viking landers reached Mars in 1976; Viking 1 touched down on the western slope of Chryse Planitia on July 20 and Viking 2 reached Utopia Planitia on September 3. They were the first objects to successfully land on Mars after a handful of American and Soviet missions failed in the 1960s and early 1970s. That makes the above picture that much more amazing. This is the first ever picture of the surface of Mars! They did a lot of science, too. Each Viking lander had three biological experiments on board designed to look for signs of life, and while they didn’t find any they did discover some unexpected chemical activity in the soil. Viking taught us that Mars is self-sterilizing through a combination of ultraviolet radiation, the dry soil, and the oxidizing nature of the soil. The landers far outlived their designed 90-day lifetimes. Viking Lander 1 contacted Earth for the last time on November 11, 1982 and Viking 2 made its last transmission on April 11, 1980. Pathfinder

Pathfinder's first image shows the Sojourner rover on one of the landing pedals. NASA/JPL. The Pathfinder lander marked our return to Mars’ surface at Viking, landing at the Ares Vallis on July 4, 1997. This mission demonstrated some remarkable new technologies. Pathfinder pioneered the airbag landing system — a pyramid of airbags deployed around the lander’s shell, allowing it to free fall then bounce to a stop on the Martian surface. But that wasn’t all. Pathfinder also carried a small, 23-pound rover called Sojourner that demonstrated it is possible to explore a planet with a somewhat autonomous rover. Now we didn't need to stay in place, we could explore more than just the immediate landing site. Before the final transmission on September 27, 1997, Mars Pathfinder sent back more than 16,500 images from the lander and 550 from the rover. It also took more than 15 chemical analyses of rock and soil as well as data on weather factors. The data suggested Mars was once wet and warm with flowing water, found magnetic dust particles indicative of a past water cycle, and found temperature fluctuations that could only come from heat convection in the scant atmosphere. Phoenix

The first image from Phoenix shows one of its landing pads. NASA. The Phoenix lander, which took the place of the lost Mars Polar Lander, reached our planetary neighbour on May 25, 2008. The mission was followed NASA's ever-present Mars rule of "follow the water" — we know lifeon Earth needs water so the logic is to follow water on Mars in the hope of finding life. As such, Phoenix landed farther north than any previous mission where it dug into an ice-rich layer near the surface. It collected soil samples with its robotic arm, and some were heated to release volatiles to reveal the soil’s chemical composition. Phoenix also had a stereo camera, two “eyes” that gave us a high-resolution view of Mars’ geology.  InSight

The first image from InSight, with the dust cover still on. You can see how the dust has been blown away around that big rock in the foreground, suggesting the dust can be moved easily in the landing area. NASA/JPL. The latest mission, InSight, landed on November 26, 2018. An acronym for Interior Exploration using Seismic Investigations, Geodesy and Heat Transport (yes, it’s a mouthful!), this lander is a geology station. It’s going to help us understand the processes that shaped Mars by digging 16 feet (5 metres) into the ground. It will listen for the telltale signs of the processes of terrestrial planet formation as well as measure Mars’ vitals, its seismic pulse, heat flow temperature, and reflexes. Already this first image is showing us something. We can see, even with the dirty dust cover still in place, that the area is pretty clear of debris so it’s likely an area of loose dust. Which is exactly the kind of site you want to dig into! As of Monday night, the solar panels are deployed. Things are looking good, which means the science mission and can start unlocking Mars' inner mysteries.