Inside the Cosmodrome: Where Russia launches Americans into space 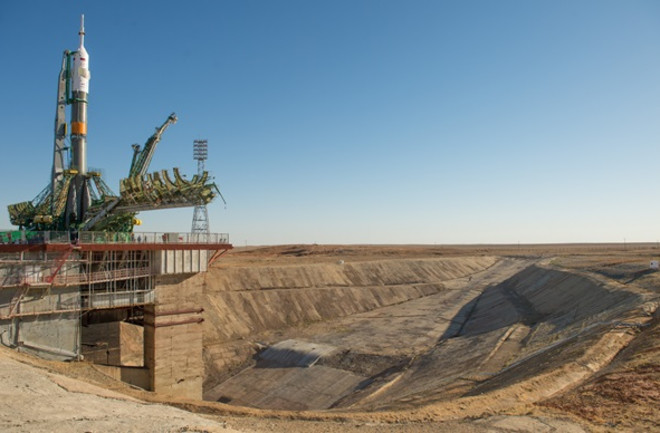 A Soyuz rocket sits on its launch pad at the Baikonur Cosmodrome in September 2013. (Credit: NASA/Carla Cioffi) BAIKONUR, KAZAKHSTAN – That rocket looked so tiny from a mile away. Shining white against the dull beige sands of Baikonur, the Soyuz had three people on board all set for a ride to the International Space Station. From this distance, though, it appeared fragile, like a child's plaything. Standing beside me was a member of the backup crew, Canadian astronaut David Saint-Jacques. He passed the time talking to me about other launches he had seen. When the Soyuz finally lighted its engines – kicking up dust, roaring in its straps – Saint-Jacques fell silent, presumably counting down milestones as the rocket began its flight. Once set free, the Soyuz quickly sprang up into the blue sky. The crowd of locals and journalists surrounding me cheered. I focused my camera on the rocket and turned back to Saint-Jacques, silently watching its flawless ascent into the clouds. His turn will be in December, carrying on a long line of tradition surrounding each one of these rocket launches from Kazakhstan.

Expedition 56 crewmembers (from left) Serena Aunon-Chancellor of NASA, Sergey Prokopyev of Roscosmos, and Alexander Gerst of the European Space Agency undergo their first Soyuz fit check during a dress rehearsal prior to launch. (Credit: NASA/Victor Zelentsov) Baikonur is an oppressive place, unforgiving, friendly only to camels and hardy plants. Yet the rockets keep launching here on time. (This one lifted off at precisely the right moment, on June 6 at 5:12 p.m. local – 7:12 a.m. EDT.) In winter, winds howl across the plain and temperatures often dip below -40 degrees Fahrenheit. In summer, it's just the opposite, with heat and Sun baking bystanders and workers alike. Yet we came, all 43 of us, a corps made up of people from France and Germany and Canada. In a group that large facing a language barrier, unrelenting heat and hours ferrying between sites on buses, the trip is either going to go very well – or very poorly. Luckily, we chose to be comrades. We held each other's microphones and cameras. When equipment broke, we shared resources. We even borrowed pictures from each other to tell our viewers and readers the best story we could. I remember feeling tired almost all the time. My shoulders ached from carrying a heavy backpack full of equipment and extra water. My feet could barely support me at times. My Russian – after four years of study – still felt broken and inadequate. But it didn't matter; I was exuberant. Like all of the space workers doing their work around us, we journalists were here to catalog a momentous event much bigger than any single person. Yes, we were at the launch of Expedition 56, but we were documenting one small step in the Russian space program – a program that will likely face a lot of change in the next couple of years. Many of us felt we were watching the fading pages of an era. Today, it's a celebration. Today, it's another crewed spaceflight to add to a long list of successes here at Baikonur, all the way back to Yuri Gagarin in 1961. But what will happen when NASA's launch agreement with Russia ceases in 2019, and commercial crew vehicles ferry American astronauts from American soil? Who will launch inside these Soyuz rockets, and how often? The space agencies kept telling us (during press conferences) that discussions are ongoing, but we were unsatisfied with the answers. In only a year, there will be a lot of uncertainty.

This mural greets visitors as they enter the town of Baikonur, Kazakhstan. (Credit: Bill Ingalls)

As we watched the astronauts on launch day go from quarantine to the rocket, I reflected on some of the strange history surrounding Baikonur. Back in the era of Yuri Gagarin, it was a part of the Soviet Union, a secret location not known in the western world. This status relaxed over the years, but then Baikonur faced a major storm in 1991. During the breakup of the Soviet Union, uncertainty about Baikonur's status stranded an unlucky cosmonaut aboard Russian space station Mir for several extra months. Finally, Russia and the newly formed Kazakhstan came to an agreement where Russia will rent the facilities for about $115 million USD a year until the year 2050. The pact is holding up things for now, but as somewhat-tourists we can't help but see that Baikonur is a one-trick pony. The souvenir shops are space-themed. Most of the work force here supports the space program in some way. The few tourists that come here, come mostly for the space launches. Without the space program, Baikonur probably wouldn't be here. After all, it was built up for the space program back in the 1950s; space is pretty much its only reason for existence. The locals are justifiably proud of their contributions. I saw the faces of the men riding on the train carrying that Soyuz rocket; I had no idea who exactly they were, but clearly they felt it was one of the best mornings of their lives. I informally spoke with a young man who plays a key role during the launch; he played down his contribution, speaking more of the greater team behind him during those last few moments the crew is connected to Earth. And the guards, the ever-present military security, were very kind with us bumbling reporters. Using gestures and facial expressions, they kept us in the safe zones as we watched the crew go through their last few rituals before launch. Where will all of these people be in a few years? Today these guards are holding back the crowds as the crew walks from the quarantine at the Cosmonaut Hotel, waving to the cheering crowd. They hand-inspect our equipment at the next stop, when the space-suited crew makes one last appearance before Russian space officials before launch. At the launch site, I think of the young man helping the crew during their last preparations. He's learning English to better his future, and he admitted to me he may have to move to find more work. Is he speaking for all of Baikonur? Or is he just being prudent?

The Soyuz MS-09 rocket carrying the Expedition 56 crew to the International Space Station lifts off from the Baikonur Cosmodrome in Kazakhstan. (Credit: NASA/Joel Kowsky) Telling the story In the moments after launch, Saint-Jacques quietly left the crowd while holding hands with his wife. A group of youngsters set off a party popper of streamers that rained down green and purple on the scorched ground. European space officials embraced each other, and I caught sight of a few older German astronauts wandering around, talking with any reporter willing to share their excitement. The Russians stopped their loudspeaker updates, and the launch tower at the pad silently folded up like a cocoon. The 48 hours before launch happened so quickly that most of us in the press corps were still stunned, feeling washed over by the tides of history. A phrase from Blade Runner kept running through my head: "I've seen things you people wouldn't believe." How do you describe the feelings watching the astronauts, recalling the history, and documenting the moments before a rocket beautifully sails up into the sky? Standing here in Kazakhstan, some 5,000 miles from family and friends and everything familiar, I turn back to the journalistic instinct: document everything. I take pictures. Look around me. Meet up with my new press corps friends to share experiences, making sure I missed nothing. But somehow, my actions feel inadequate. Responsibility weighs on me. There's an empty launch pad sitting a mile away. There used to be people and a white rocket on top of it, and now they're gone. I got to see them leave. Now, I have to figure out how to explain it to everyone reading these words. Because Russia's space program is about to change, and some space historian in a few years will want to know the way things used to be. As I think about what to write, I pick up a green streamer from the ground, that just moments ago had been in flight – just like the crew. A small symbol of the local celebration. Then it comes to me; my perspective was flawed. The story of today's launch wasn't about the astronauts, but about the thousands upon thousands of residents that pulled off another flawless launch. They will ride the railroad back to Baikonur's town tonight, only to turn around in the morning and work on the next crew. And then the next one. They're the real story, but most of us will never know their names. I've seen things you people wouldn't believe, but more importantly, thousands of people unknown to history are making those things happen. Will they still have a job in a few years? While they toil under the uncertainty, they make the rockets run beautifully – and on time. I'm not sure what price you can put on local joy and pride, but I do hope that it will remain no matter what Baikonur's future in the space program may be. This article originally appeared on Astronomy.com.