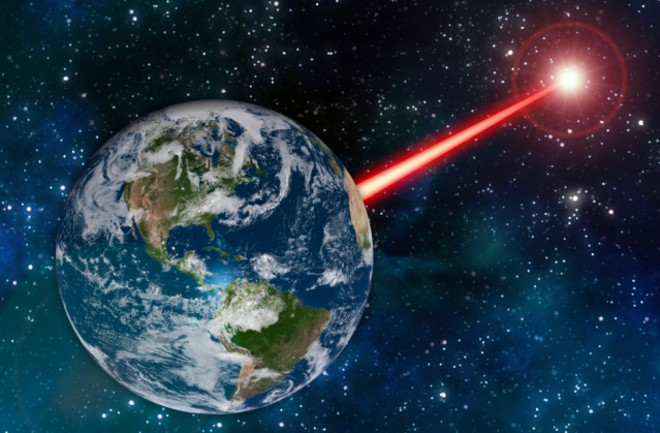 Credit: MIT News If extraterrestrial life exists in our neck of the Milky Way, how would we make our presence known to one another? Could we just shoot a massive, unmistakable signal out into space? As it turns out, this wild sounding idea could actually be carried out with current and developing technologies. A new MIT study found that by shining a powerful laser through a gigantic telescope, humans could produce a beam of infrared radiation detectable from 20,000 light-years away. The research, which the authors dub a “feasibility study,” was published in the The Astrophysical Journal on November 5. As part of a project for one of MIT’s Department of Aeronautics and Astronautics classes, graduate student James Clark wanted to see if we could make ourselves visible to aliens as they hunt for nearby life. And what better way than by projecting a massive beam of infrared radiation into the sky? “The kinds of lasers and telescopes that are being built today can produce a detectable signal, so that an astronomer could take one look at our star and immediately see something unusual about its spectrum. I don’t know if intelligent creatures around the sun would be their first guess, but it would certainly attract further attention,” said Clark in a press release.

In order to produce an infrared beam that stands out from the sun, Clark estimates that it would need to be about 10 times stronger than the sun’s natural infrared emissions. To create such a powerful signal, he toyed with different combinations of telescopes and megawatt lasers. According to his calculations, aiming a 2-megawatt laser through a 30-meter telescope would create an SOS that could easily be seen by astronomers on Proxima Centauri b, which orbits the closest star to Earth at just four light-years away. And if we fashioned a 1-megawatt laser to 45-meter telescope, astronomers in TRAPPIST-1, a system of exoplanets about 40-light years away, could clearly detect our signal. Clark estimates that both of these emissions could theoretically be seen from up to 20,000 light-years away. The technology to build such a system is still a bit out of reach, though. According to Clark, the proposed laser's power is equivalent to that of the U.S. Air Force’s Airborne Laser, a now-retired mechanism designed to shoot ballistic missiles out of the sky — a far cry from your everyday laser. And the largest telescope on the market today, the Gran Telescopio Canarias in the Canary Islands, stretches only 10 meters in diameter. More massive telescopes are being developed, though, with construction underway for both the 24-meter Giant Magellan Telescope and the 40-meter European Extremely Large Telescope.

But just because the technology technically exists or is in the works, doesn’t mean the project would be safe, easy or even work. In order to shine through our thick atmosphere, the laser would need to be built in a high-altitude, easily-penetrable area, a.k.a on top of a mountain. And despite the beam being invisible to the naked eye, it would still emit 800 watts of power per square meter, which could cause vision damage if it’s looked at directly. It could also interfere with spacecraft cameras as they pass by the infrared signal. Plus, there’s no guarantee that a neighboring planet would ever detect our monstrous beam. Assuming alien astronomers have comparable telescopes, they would need to be in the emission's exact line of sight which, statistically speaking, is pretty unlikely. “In general, this was a feasibility study. Whether or not this is a good idea, that’s a discussion for future work,” said Clark. The idea is admittedly far off, but Clark hopes that his concept will drum up talk about the laser’s sci-fi-like possibilities, and initiate more research into infrared technologies.