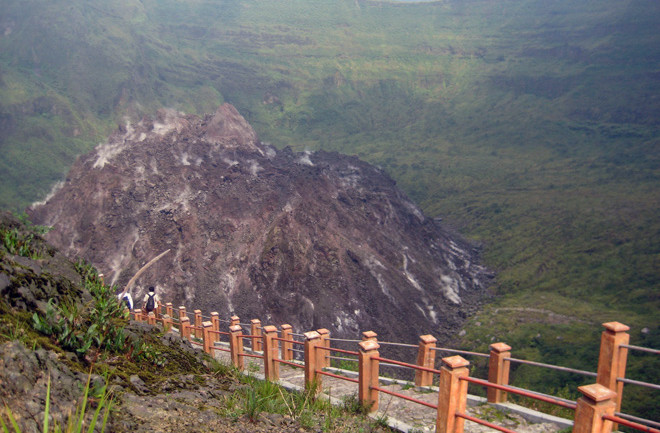 The dome within the crater at Kulet in Indonesia. This dome formed during the 2007 eruption of the volcano -- seen here in 2010. Image: Zahidayat / Flickr. Another Indonesian volcano looks to be headed for new eruptive activity. The BPBD (Disaster Management) placed towns around Kelut (also known as Kelud) on their highest alert and the PVMBG (Volcano Monitoring) has the volcano at Orange, the second-highest alert possible. This elevated status is due to a trio of signs: increased shallow earthquakes under the volcano, an inflation of the volcanic edifice and increasing temperatures of water in the crater of the volcano. These signs combined would all suggest that new magma is rising up under Kelut. has a history of fatal eruptions, with over 5,100 deaths during an eruption in 1919 and 34 deaths in 1990. Apparently, the local residents are taking this rumbling seriously -- partially due to the warnings but also due to more colloquial beliefs about animal behavior prior to an eruption. Kelut is one of the few places on the planet where people have tried to use a massive engineering project to try to mitigate against volcanic disaster. The largest hazard present at Kelut is the generation of lahars (volcanic mudflows) due to presence of a crater lake. Chris Rowan wrote a post during the 2007 activity (that built an impressive dome in the main crater - see above) about how, after the 1919 eruption, tunnels were dug to try to drain the crater lake to help prevent the generation of these lahars. The plan did work ... for awhile, but the eruption in 1951 deepened the crater lake, so new tunnels had to be dug during the 1960s. However, these tunnels might have actually made the eruption in 1966 worse. You can read the full story of these eruption and the attempts to "fix" the problem in a report from the Commission on Crater Lakes.

The PVMBG has an active webcam pointed at Kelut as well.

Meanwhile, Indonesian officials are sending people back to villages outside the 5-km exclusion zone around Sinabung

. Now, this move might seem troubling considering the recent deaths at Sinabung

, however, those deaths occurred within that 5-km exclusion zone (in fact, the people were close to 3 km of the active vent). The villages within the 5-km exclusion zone are likely to remain evacuated for much longer and some will be abandoned permanently. Even at a distance of 7 km from the volcano, these villages will be slowly repopulated as the government cleans up the copious ash that has fallen.