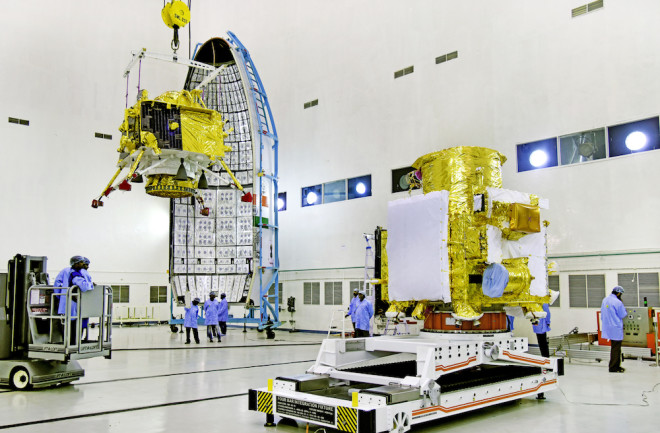 This photo of the Virkam lander shows it being hoisted and readied, prior to its launch this past July. (Credit: ISRO)

The Indian Space Research Organization (ISRO) isn’t giving up hope for its lost lunar lander just yet. The space agency will keep trying to establish contact with the Virkam lander for 14 days, according to the Times of India.

On September 6, the spacecraft was scheduled to have a soft landing in the moon’s south pole region. But as it neared the one-mile marker above the surface, communication cut out with mission control in India. The lander hasn’t been heard from since, and engineers suspect Virkam hit the surface much harder than anticipated.

Chandrayaan-2 was intended to be a multi-part mission, and a follow-up to India’s first lunar mission, Chandrayaan-1. In this latest attempt to study the moon, India was focused on the south pole region, launching an orbiter, the Virkam lander, and a rover named Pragyan on July 22.

Early in the landing sequence last week, everything in the control room seemed to be going as planned. But as the lander approached the surface, expressions of tense frustration and confusion broke out on the faces in the room. The phrase, “the data is being analyzed,” was said over and over, but the outcome seemed bleak.

Over the weekend, ISRO announced that the orbiter had caught sight of the lander. The photos have not yet been released, but according to ISRO’s chief, Kailasavadivoo Sivan, the lander has been seen near the targeted landing site and apparently in one piece. The extent of the damage to the lander and the rover inside are not yet known.

As part of the Chandrayaan-2 operation, the orbiter will continue to study the south pole region of the moon. In a statement from ISRO, officials said the lunar orbiter will now be operational for seven years. The rover was only set to last for a couple weeks. However, it would provide new information on the moon’s scarcely-explored south pole region.