The folks at Hubble just released this fantastic image! 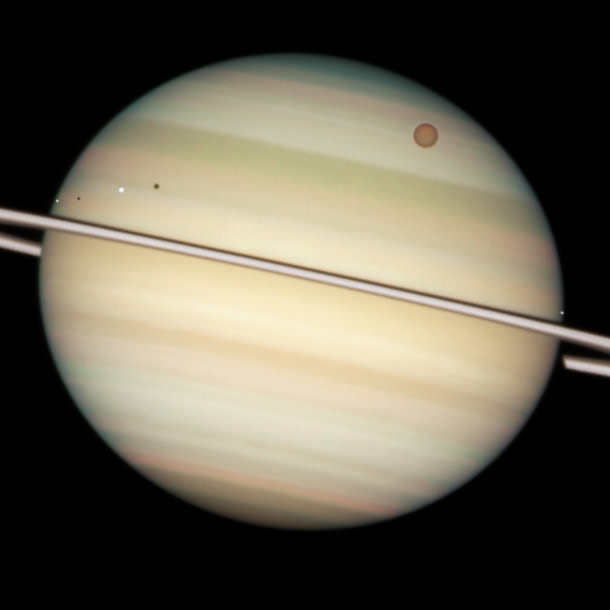 OK, duh, that's Saturn. But you can see four moons crossing its face at the same time! Such an event is pretty rare, and very cool. The moons are (from left to right) Enceladus, Dione, Titan, and Mimas. You can also see the shadows of Enceladus and Dione on the planet's cloudtops, too. Whoa. 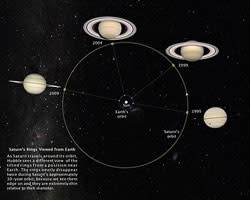 Saturn, like the Earth, is tilted with respect to its orbit around the Sun. Our tilt is about 24 degrees, and Saturn's is about 27. This means that twice every Saturn year (which are roughly 30 Earth years in length) we see Saturn's rings edge-on. They can get so thin they practically disappear! That happens in September of this year, and as you can see from the image above image, our viewing angle of the rings is currently very shallow. The icy particles in the rings orbits over Saturn's equator, just as the moons do. That means that if we're seeing the rings nearly edge-on, the orbits of the moons are that way as well. This makes transits -- moons moving across the face of the planet -- more common. So on February 24 of this year, Hubble was able to snap a spectacular series of images of four of Saturn's moons projected on Saturn's visage. You can see how the moons moved in the image below, showing the time-sequence Hubble took of the event.

Besides the relative rarity of this event, what strikes me the most is how seriously frakkin' big Titan is: if Titan were orbiting the Sun, there's be no question is would be a planet; it's easily bigger than Mercury! This also shows just how monstrous Saturn is; over 800 Earths could fit inside it. Saturn's gravity is so powerful in can hold all those moons in sway, keeping them in their clockwork orbits for billions of years. I'll add that I went out to look at Saturn a few days ago; it's up when the Sun sets, easily visible in the constellation of Leo. I couldn't help but notice how faint it looked compared to last year, and I realized with a start that this was because the rings appear so thin right now. They reflect so much light from the Sun that when we see them edge-on, Saturn is visibly dimmer! It really brought home to me that Saturn is not just a wandering point of light in the sky, but a world in and of itself, and in fact a system of worlds which interact with each other. And they dance around each other, as they have danced for eons, and will for eons to come. Image credit: NASA, ESA, and the Hubble Heritage Team (STScI/AURA)