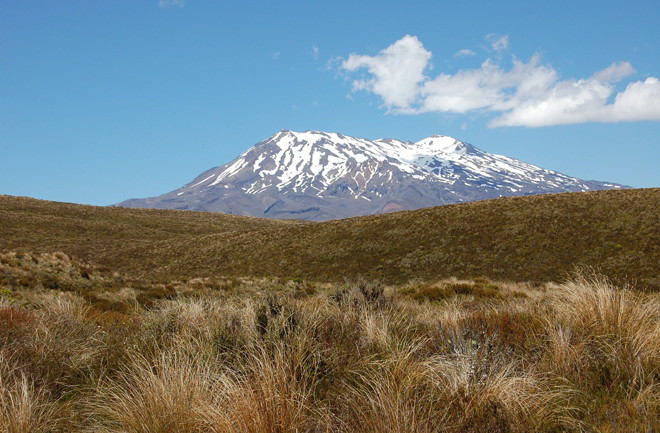 Ruapehu in New Zealand, seen in January 2009 from the Tongariro Crossings trail. Image: Erik Klemetti It has been a busy year for New Zealand's GNS Science - the island nation's volcanoes have rumbled more in 2012 than in any year in decades. We saw eruptions from volcanoes that had been long quiet (Tongariro), that weren't recognized as active volcanoes (Havre) and pose a significant threat to tourists (White Island). Now it seems that New Zealand's most active volcano might get in on the action as Ruapehu has started to show signs that an eruption might be in the works. Ruapehu erupts relatively frequently, with its last sustained eruptive period coming from 1995-6, although small explosions that generated lahars occurred in 2006 and 2007. One of the key signs of an impending eruption at the volcano is the temperature of the summit crater lake - we've seen cycles were the lake waters have increased to over 30C. Right now, the lake temperatures are only about 20C, still warm for an alpine lake, but not really what might be expected before an eruption. However, Steven Sherburn of GNS Science has been quoted as saying that they believe that the temperature within the volcano below the lake could be as high as 800C, suggesting that heat flow out of the volcano is "blocked". I'm a little confused by this description, which has been summarized by most news sources, but likely means that hot gases from the rising column of magma aren't making it out of the volcano into the crater lake waters. Movement of gases and fluids help in a lot of heat transfer within a volcano, so anything preventing that will keep heat from moving outward. Anytime you have heat or gases/fluids trapped in a volcano, that means pressure can build - never a good sign at a volcano. Dr. Sherburn also said that an eruption might be expected in weeks to months (unlike some news sources that make it seem like it might happen very soon). The New Zealand government is taking this change at Ruapehu seriously and has warned people from climbing the volcano, as a lahar can be generated quickly by relatively small explosions when ice and snow melt at the summit or the crater lake is breached. Ruapehu does have a lahar warning system installed on the volcano, as lahars are the #1 volcanic hazard at the volcano. However, if you are near the summit area, even a warning system likely doesn't give you sufficient time to get out of the way. GNS Science has elevated the alert to Yellow/1 -- and checking out the webicorder and webcam for the volcano show that at least on those fronts, things are still quiet in New Zealand.