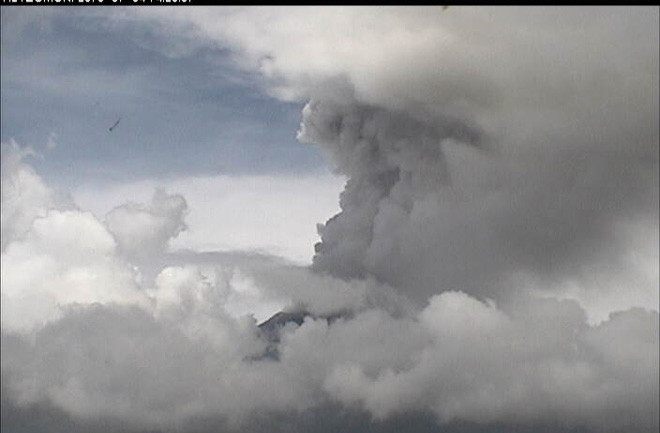 The ashy eruptive plume from Mexico's Popocatépetl, seen on July 4, 2013. Image: Webcam capture via CENAPRED. The eruption at Mexico's Popocatépetl continues its up and down character, this time taking an upswing over the past few days (video). For much of July 4, the volcano produced a continuous plume of ash and steam (see above) that was accompanied almost constant high frequency tremor, likely the result of the magma rising in the volcanic conduit. Almost 100 "exhalations" (small explosions) were also noted at the crater of Popocatépetl, sending more ash and incandescent bombs down the slopes of the volcano along with some minor ash fall on surrounding communities as this video shows. The Telegraphposted some video of the activity that occurred during the night, so you can see the bombs being thrown from the vent (although they decided to slow down the video a lot). All of this ashy activity with reports of ash up to ~8 km (27,000 feet) at Popocatépetl meant that some airlines decided to play it safe and cancel flights in and out of Mexico City, including American, Alaska and United -- however, the airport was still open with Mexican officials claiming that everything is just fine for the airlines to operate out of the Mexican capital (along with nearby Toluca). Even with all this near activity, CENAPRED continues to keep the volcano at alert status Yellow-Level II, meaning heightened activity, but the National Coordinator of Civil Protection of the Ministry of the Interior said that an increase to Yellow-Level III could occur if this activity continues. Remember, when conditions are right, you can watch the activity at Popocatepetl from one of the four CENAPRED webcams pointed at the volcano: Tlamacas, Altzomoni, Tianguismanalco and Tochimilco.