Inbreeding and the Downfall of the Spanish Hapsburgs

New research offers a more precise genetic framework for understanding the decline of the Spanish Hapsburgs. 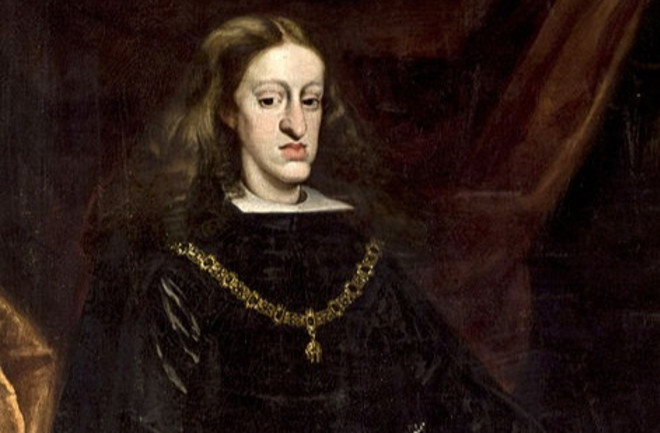 The Hapsburgs are one of those royal families who are relatively well known, and in the minds of the public are to a great extent the emblems of the downsides of inbreeding. In the painting above is Charles II, king of Spain, the last of the Spanish Hapsburgs, and an imbecile whose premature death at the age of 39 ushered in a period of dynastic chaos which led to the War of Spanish Succession. These conflicts between France and other European powers were one of those turning points in history, a sad capstone to the long reign of the Sun King, Louis the XIV. France’s position as the unchallenged power of Europe ended due to the fiscal and military overextension necessitated by Louis’ war to secure the Spanish throne for his grandson.

But this a story of genetics as well as history, because historians have long assumed impressionistically that there was something rotten in the gene pool of the Spanish Hapsburgs. Here is an excerpt from an online biography of Charles II:

The Habsburg King Carlos II of Spain was sadly degenerated with an enormous misshapen head. His Habsburg jaw stood so much out that his two rows of teeth could not meet; he was unable to chew. His tongue was so large that he was barely able to speak. His intellect was similarly disabled. His brief life consisted chiefly of a passage from prolonged infancy to premature senility. Carlos’ family was anxious only to prolong his days and thought little about his education, so that he could barely read or write. He had been fed by wet nurses until the age of 5 or 6 and was not allowed to walk until almost fully grown. Even then, he was unable to walk properly, because his legs would not support him and he fell several times. His body remained that of an invalid child. The nature of his upbringing, the inadequacy of his education, the stiff etiquette of his court, his dependence upon his mother and his superstition helped to create a mentally retarded and hypersensitive monarch.

A new paper in PLoS One offers a more precise genetic framework for understanding the decline of the Spanish Hapsburgs, The Role of Inbreeding in the Extinction of a European Royal Dynasty:

The kings of the Spanish Habsburg dynasty (1516-1700) frequently married close relatives in such a way that uncle-niece, first cousins and other consanguineous unions were prevalent in that dynasty. In the historical literature, it has been suggested that inbreeding was a major cause responsible for the extinction of the dynasty when the king Charles II, physically and mentally disabled, died in 1700 and no children were born from his two marriages, but this hypothesis has not been examined from a genetic perspective. In this article, this hypothesis is checked by computing the inbreeding coefficient (F) of the Spanish Habsburg kings from an extended pedigree up to 16 generations in depth and involving more than 3,000 individuals. The inbreeding coefficient of the Spanish Habsburg kings increased strongly along generations from 0.025 for king Philip I, the founder of the dynasty, to 0.254 for Charles II and several members of the dynasty had inbreeding coefficients higher than 0.20. In addition to inbreeding due to unions between close relatives, ancestral inbreeding from multiple remote ancestors makes a substantial contribution to the inbreeding coefficient of most kings. A statistically significant inbreeding depression for survival to 10 years is detected in the progenies of the Spanish Habsburg kings. The results indicate that inbreeding at the level of first cousin (F = 0.0625) exerted an adverse effect on survival of 17.8%612.3. It is speculated that the simultaneous occurrence in Charles II (F = 0.254) of two different genetic disorders: combined pituitary hormone deficiency and distal renal tubular acidosis, determined by recessive alleles at two unlinked loci, could explain most of the complex clinical profile of this king, including his impotence/infertility which in last instance led to the extinction of the dynasty.

F, or the coefficient of inbreeding, is critical here. Charles II was not simply the offspring of a first cousin marriage, he was the culmination of a repeated instances of cousin marriage over several generations. Below is a pedigree of Charles’ descent from Philip and Joanna of Castile (the latter being the daughter of the famed Ferdinand and Isabella of Aragon & Castile respectively). I have highlighted those ancestors who enter the lineage from the outside, that is, they are introducing relatively “fresh blood.”

As you can see, Charles’ genealogy loops back into itself quite often! Philip & Joanna are Charles’ forebears many times over. This is a problem. To see how, consider if Philip or Joanna carry a deleterious mutation which is recessive in its expression. Presumably their children would be unaffected, because only one of them should carry a rare deleterious mutation, resulting complementation so that one full functional copy is sufficient. But in Charles’ cases both of his parents are descendants of Philip & Joanna, so the probability that he will inherit the same faulty allele from both parents is heightened. The formula for F, the inbreeding coefficient is:

Let’s play this out for a brother-sister mating. Assuming that the grandparents, of whom there are only two, are unrelated. So FA = 0.

Then, it simplifies to:

In other words, Charles II was moderately more inbred than the average among the offspring from brother-sister matings!

Over time this sort of process would result in radically increased inbreeding coefficients. The chart to the left plots out the process of repeated brother-sister matings within an isolated population over time. The inbreeding coefficient naturally converges upon 1. In some ways inbreeding can be thought of as a way to crank down long term effective population size and increase the power of stochastic processes within a gene pool. If drift becomes powerful enough it can lead the population toward extinction through mutational meltdown. Mutational meltdown can be thought of as a snowball effect, whereby small populations allow for the fixation of deleterious mutants, which reduce fitness, and further drive down the population and increase the probability of the fixation of deleterious mutations. In the case of the Hapsburgs there is no need for de novo mutations, all humans carry within them numerous deleterious alleles which are masked because they only express recessively. Over the generations of inbreeding these alleles may slowly been unmasked, ending in Charles II.

Within the data set from the Spanish Hapsburgs the researchers find strong evidence for inbreeding depression, as defined by reduced fitness of the offspring from population mean fitness:

From 1527 to 1661, when Philip II and Charles II were born respectively, the Spanish royal families had 34 children, 10 (29.4%) of them died before 1 year, and 17 (50.0%) of these children died before 10 years…These figures are clearly higher than the mortality rates registered for contemporary Spanish villageswhich include families belonging to a wide range of social classes and where, for example, infantile mortalities were about 20%.

The Spanish Hapsburgs had a higher infant mortality than Spanish commoners. This is extremely suggestive. But the data set here is large enough, just barely, to go a little further. Here is a multiple regression (least squares) which shows the effect of inbreeding coefficient on mortality (take from Table 4):

In plain English, the higher the inbreeding coefficient the higher mortality. None of this is qualitatively surprising, the impressionistic assumption by historians has always been that there was a degeneration of the Spanish Hapsburgs due to inbreeding (see Henry Kamen’s Empire: How Spain Became a World Power, 1492-1763. But it is nice to see it laid out in a precise manner. Not only did the Spanish Hapsburgs have a high infant mortality rate, but it got higher as their inbreeding become more advanced. Correlation is not causation, but correlation is necessary for an inference of causation.

The authors finish with some detailed speculations on the specific diseases and genetic abnormalities which Charles II might have been subject to. Since the paper is Open Access, I recommend you just go straight to it. Rather, I want to point to something interesting:

Though in many cultures cousin-marriage is preferred for various reasons, until recently it was extant at lower frequencies than is the case today. Why? Consider that lower infant morality in modern societies, and the large families the norm in many developed societies. This increases the pool of possible mates in many extended families. As you can see above iterated generations of inbreeding tend to result in some serious problems. The Samaritans of Israel are even engaging in a program of marrying out to reduce the high frequency of birth defects. That being said, smaller families sizes in many developed nations in the near future might mean that there is a natural social break on the practice of cousin marriage. Consider if you have a dozen first cousins to choose from vs. three. That might make a big difference in terms of the probability of exogamy or not.