In the Other Room 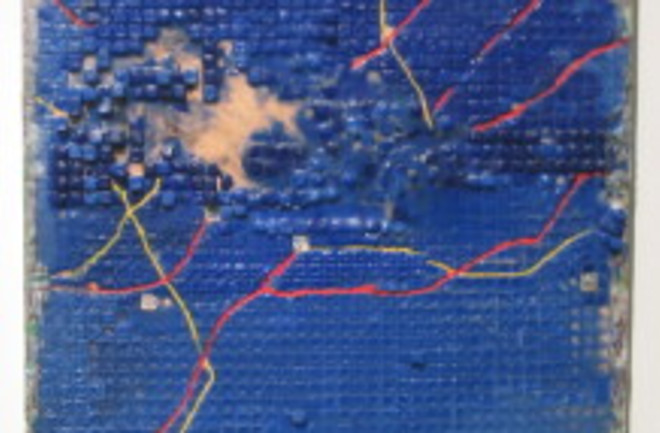 The other thing that's nice about the Categorically Not! gatherings is the fact that you can wander in the other parts of the space (a giant aircraft hangar) and find interesting displays of art, and run into interesting people. One time, I ran into Julie Weiss! You've no idea who that is, right? Thought not. Well, you probbaly know her work. She is a designer in the film industry, and she's helped set the overall look of several films, including American Beauty, Frida, The Ring (oh yes!), Twelve Monkeys, etc. Wonderful work that is understated and unsung....the overall look of a film is so important to how you see it, but we forget this and just credit everything to the director...... She's just busily designing in the room next door while we're doing our Categorically Not! stuff. Who knows what film I'll be looking at sometime soon and seeing work that I could hear being done in the studio next door....we shall see! Last time, I was introduced to an artist, Gurpran Rau, who had some pieces up. (You can see some snaps I took in this post, above and below. Click on her name to go to a site with better reproductions....)

She wanted me to see them since some of them had knots in them, and she'd been wondering about knots. (She heard I work on string theory, you see. Do keep up.) Anyway, so I went to look, and overall it was just lovely and rather interesting....and there was a lot more than that.

Very tactile wax surfaces....there are biological and genetics themes in the knot ones, and themes involving the cycle of life in others....

...they all have a pleasant three dimensionality I liked. I particularly liked the cycle with the circle present in each (the circle in each case is a found object....discarded machine parts, etc.) -cvj [Update: The Santa Monica Art Studios' celebration of their first anniversary is tomorrow 3rd Dec, 6:00-9:00pm, and also on Sunday 4th Dec., 1:00-5:00pm. You can see all 29 studios' work. There's more information at this link.]