In the Moon's Shadow, America Looks Up

The solar event that transfixed Americans from sea to shining sea. 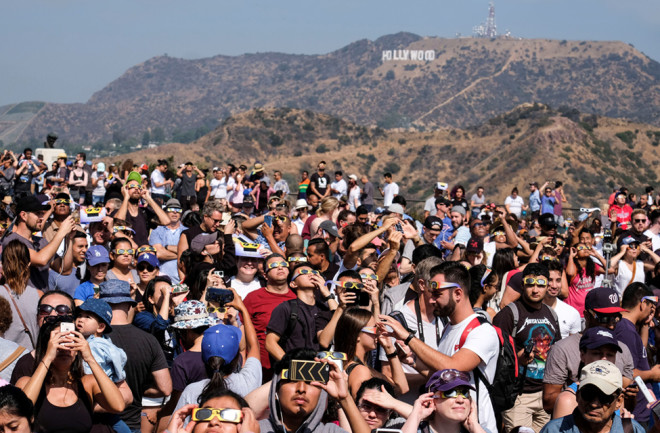 Solar eclipse parties, like this one in Los Angeles, were popular all over the United States on Aug. 21, as millions gathered to watch a partial or total solar eclipse. | Xinhua/Zhao Hanrong via Getty Images

Two things were inescapable this summer: the Latin single “Despacito,” and the looming eclipse. The first total solar eclipse in the continental United States since 1979, it was also a uniquely American event, with no other countries getting a peek at totality, and at least a partial eclipse visible in all 50 states. As the moon’s shadow crisscrossed the country on Aug. 21, about 154 million American adults saw the eclipse directly, with another 60 million watching electronically — 88 percent of the adult population. It was the most-observed and most-photographed eclipse in history.

In a time of so much bitter division, it’s remarkable that an astronomical event just a few minutes long had the power to bring us together, gazing in joy and wonder at the universe.

The staffs of sister magazines Discover and Astronomy were all over the country during the eclipse. Here, briefly, is what they saw.

Students react as they witness totality in Oregon. | Peter Dasilva

1. Thousands of people from all over the world descended on “SolarTown” — a farmer’s field turned eclipse mega-party. Favorable winds kept epic wildfire smoke from ruining the spectacle on eclipse day, when the moon’s shadow was met with hoots and hollers and thunderous applause. An equally epic traffic jam broke out minutes after totality.

2. What really amazed me, and perhaps it was accentuated due to our elevation, was the color: A brief glimpse of the sun’s atmosphere appeared strongly pink, and we saw what appeared to be a bluish tinge with the diamond rings. It was spectacular! — David J. Eicher, Jackson Hole, WY

3. Not a cloud crossed the powder blue sky, allowing a spectacular view of a surprisingly large sunspot group followed by several ruby red prominences during totality. Shortly after the sun emerged, massive gridlock formed when thousands of vehicles funneled into a handful of exits. — Ernie Mastroianni, Glendo State Park, WY

4. Despite lots of clouds, we saw first and second contacts, the initial diamond ring, the sun’s corona and fourth contact. Hearing 25,000 people screaming at the darkness and the appearance of the corona is something I’ll never forget. — Michael Bakich, St. Joseph, MO

5. It was one of the strangest phenomena I’ve ever witnessed. As darkness started to envelop the city, our dogs started barking like crazy. As soon as totality hit, I began jumping up and down, laughing like the Joker. I wasn’t sure 16 hours of driving would be worth two minutes of spectacle, but it most definitely was. — Jake Parks, Columbia, MO

6. That morning, we toyed with battling traffic and crowds to watch from the famed St. Louis Arch, but with a 4-year-old niece in tow, we opted instead for the closest wide-open space — the parking lot of a Schnucks grocery store. Eclipse fever was real: Checkout cashiers were handing out eclipse glasses! — Becky Lang, Crestwood, MO

7. It was a sweltering day, but the sky was clear. Excitement filled the air as we sat waiting for that magical moment. As the eclipse began, I heard a kid shout, “It looks like Pac-Man!” Suddenly we were in twilight, the cicadas chirping in confusion, gasps and cheers all around us. I understand why people chase eclipses now. It’s an experience like no other. — Alison Mackey, De Soto, MO

8. My dad and I traveled together to see our first total solar eclipse. We were both blown away — pictures really cannot do it justice, from how the quality of the daylight changes to the reactions of the crowd sharing the experience with us. — Alison Klesman, Red Bud, IL

9. I recall most vividly the jewel-bright ring in the sky where the sun had been: science fiction come to life. For just over two minutes, the scale of the cosmos was laid bare. — Nathaniel Scharping, Shawnee National Forest, IL

10. We watched the eclipse from a steamy city park, which capitalized on its perfect location in the shadow’s path. Amid live music, tall trees and $3 hot dogs, we saw brilliant diamond rings, a diffuse corona and an inky black shadow, accentuated by the shouts and ooh-ing of hundreds. — Bill Andrews, Gallatin, TN

11. Skies were partly cloudy, but we had a nice shot of the eclipse’s early stages through maximum. With the moon covering only 80 percent of the sun, however, the view was less than breathtaking. — Rich Talcott, Cleveland, OH

12. It was super cloudy, but we went out anyway and stood around talking until the clouds would get slightly less dense; then everyone would — quick! — put on their glasses and try to catch a glimpse before the clouds filled in again. Those few snatches were cool, but the coolest part was everyone on social media and texting, talking about if they’d seen anything or not. Eclipses: The Great Unifier. — Elisa Neckar, Waukesha, WI