In the Eyes of Bonobos, Bullies Rule 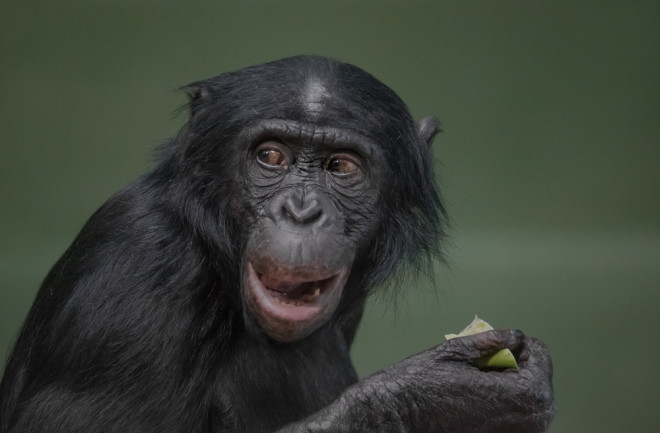 (Credit: Shutterstock) The great Mr. Rogers once shared these words of wisdom to allay our fears in times of great strife: “When I was a boy and I would see scary things in the news, my mother would say to me, ‘Look for the helpers. You will always find people who are helping.’” But bonobos, our highly social and sexually promiscuous closest relatives, probably couldn’t care less about those helpers. Instead, they’d much rather keep their eyes peeled for the bullies. Like humans, bonobos are capable of compassion, empathy, kindness and generally getting along as a group. Human infants, studies show, demonstrate a preference for people they observe helping others by the tender age of three months. That’s the prosocial preference hypothesis in a nutshell: Our ability to build a cohesive society depends on cooperation and helping others, so we innately prefer individuals who demonstrate such behaviors. Given bonobos are so closely related to humans, it was thought they shared this same preference. We may have thought wrong. In a study published Thursday in Current Biology, Christopher Krupenye and Brian Hare designed four experiments to determine who bonobos prefer: helpers or hinderers? In one experiment, they played an animation that depicted a happy little circle repeatedly failing to climb a steep hill. In one video, a helper agent (a blue triangle) gives the circle a push up the hill—great success! In another, a hinderer agent (a red square) pushes the poor little circle back down the hill. After viewing these triumphs and tragedies, bonobos chose paper cutouts of the agent they preferred to get a reward. Just two of the 13 bonobos in the trial chose the blue triangle helper, while the rest chose the square jerk. In another trial, 22 bonobos watched a real-life human dropping a toy. In one scenario, a helper retrieved the toy and handed it back to the butterfingered actor. In the other demonstration, a hinderer came along and aggressively snatched the toy away. Immediately after the demonstration, both the helper and hinderer offered the bonobos a treat. And again, they showed a preference for the person who made life more difficult. Two subsequent, and similar trials, yielded the same results. Whether animated or human, the bonobos time and again showed a preference for the jerk. “Our results support the predictions of the dominance hypothesis and raise the possibility that the motivation to prefer prosocial individuals evolved in humans after their divergence from the other apes,” the researchers wrote in their paper. Of course, these conclusions aren’t set in stone. Krupenye and Hare suggest taking this line of research further. A hinderer, for example, may be appealing because their behavior is viewed as dominating a subordinate. Wild bonobos will beg for food from dominants, and females choose the most dominant males as mates. But, as the researchers note, hindering and dominance aren’t one in the same. Future experiments would explore the subtle differences between social and antisocial behavior and the dynamic between dominants and subordinates. Further, Krupenye and Hare also suggest experiments that test whether bonobos prefer helping, or prosocial behavior, in certain contexts. Perhaps there are times when the nice bonobo doesn't finish last? Still, the researchers say their quartet of experiments provides evidence that humans and bonobos diverge sharply in their interpretation of prosocial behavior. In other words, cheering for the “nice guy” and singing Kumbaya might be a uniquely human preference.