In case you missed it: Juno's first view of Jupiter from orbit 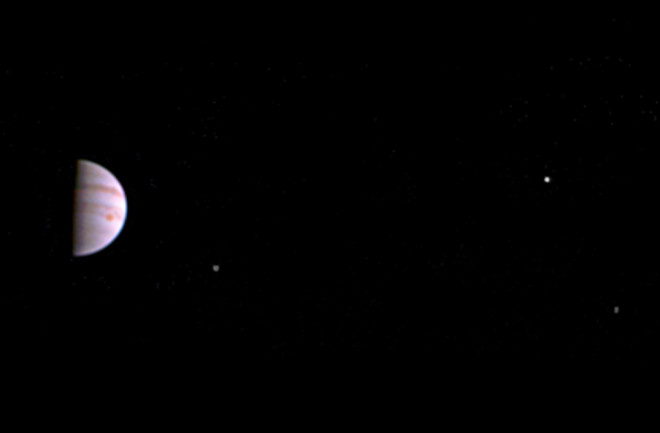 Jupiter as seen from from NASA's Juno spacecraft. (Source: NASA/JPL-Caltech/SwRI/MSSS) The image above is the Juno spacecraft's first view of Jupiter and some of its moons after it entered orbit around the gas giant on July 4th. Published by NASA on July 12, it consists of data acquired by the JunoCam when the spacecraft was 2.7 million miles from Jupiter. Juno was heading away from the planet on its first 53.5-day "capture orbit" — the beginning of its orbital mission. On Oct. 19, the spacecraft will execute its final engine burn of the mission, placing Juno into a 14-day orbit and marking the start of the primary science mission.

Look closely and you can discern atmospheric features on Jupiter, including the Great Red Spot. Also visible are three of the massive planet's four largest moons -- Io, Europa and Ganymede, from left to right in the image. (Go here for a labeled version of the image.) This is a relatively low-resolution image. The first high-resolution images are scheduled to be taken on August 27th. Juno mission is to help reveal details about the origin and evolution of Jupiter — details that could help us gain a better understanding of the story of our solar system. The plan is for Juno to make 37 orbits around Jupiter over the course of 20 months. It is then scheduled to "deorbit" into Jupiter in February of 2018.