In 2022, We Might Witness the Explosive End to a Stellar Death Spiral 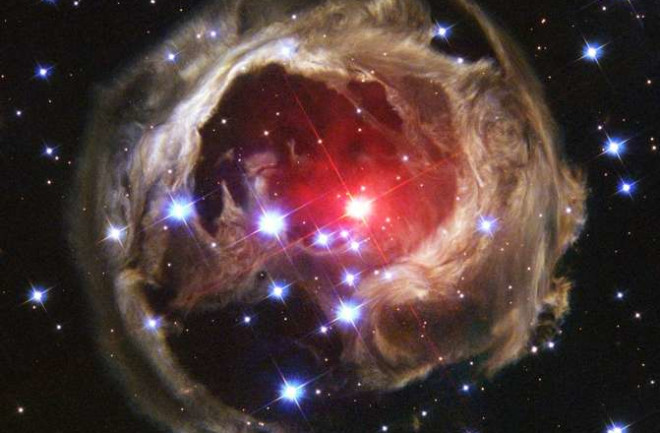 [UPDATE: Sorry, folks. The paper we report on here forecasting a visible supernova in 2022 has been corrected as of September 7, 2018. A typo in the dataset they used led to a false prediction that we would see the collision of a binary star in 2022. There will be no supernova that year as far as we know. We may witness the event sometime in the future, though, so stay tuned!]

In five years, you could have a front row seat to an explosive event that occurred 1,700 years ago. And all you'll have to do is look skyward. Larry Molnar, an astronomer at Michigan's Calvin College has been studying the behavior of an odd object located in the Cygnus constellation, named KIC 9832227. Discovered a bit over a decade ago, it was recently shown to be a contact binary star — two stars orbiting each other so tightly that their atmospheres are conjoined in a stellar embrace. That discovery was made by Daniel Van Noord, Molnar's research assistant, and since then, the two have been paying very close attention to the star. In a paper presented this week at the 229th American Astronomical Science meeting, Molnar shared his latest findings, along with a shocking revelation: the two stars are going to reach the explosive end of their death spiral within just a few years. It seems that the stars' rate of rotation, as measured by periodic dips in brightness, has been speeding up noticeably in the few years it has been observed. Based on models of contact binary star behavior, the two should meet in an incandescent bear hug in 2022, give or take a year or so. This kind of event, called a luminous red nova, has only been observed a few times, and for a few months should shine brightly in the heavens, even to the naked eye. This kind of prediction wouldn't have been possible even a few years ago. It wasn't until 2008 that astronomers were able to catch their first glimpse of a contact binary star merging, when researchers from Poland reported that they had caught a red nova, and more importantly the years leading up to it, on camera. By studying changes in the stars' orbital period and light curve leading up to the explosion, they documented the process that leads to a merger for the first time. That information was crucial for Molnar and his team — he refers to it as a "Rosetta Stone". Using models from the 2008 merger, the Molnar was able to match his observations of KIC 9832227 to the model, giving him the confidence to predict when the two will likely meet. His latest paper also rules out some key alternative explanations for the object's behavior, such as the presence of another star orbiting much further away. In the coming years, he plans to study the star using radio, infrared and X-ray observatories to get a full picture of how it is evolving. Those observations should help to refine our models of contact binary star mergers and shore up Molnar's prediction.

The Cygnus and Lyra contellations outlined in blue, where KIC 9832227 will appear is circled in red. (Credit: Larry Molnar/Calvin College) “If the prediction is correct, then for the first time in history, parents will be able to point to a dark spot in the sky and say, ‘Watch, kids, there’s a star hiding in there, but soon it’s going to light up,’” Molnar said in a statement. When the stellar conflagration does happen, it should appear near the constellations of Cygnus and Lyra, and the star will briefly shine 10,000 times brighter than usual. Previous red novas have rivaled even the most powerful stars in the galaxy. Of course, this event, if and when it appears, will already be long over. That's the paradoxical nature of stellar observations, which, limited by the speed of light, take hundreds or even thousands of years to reach us here on Earth. Right or wrong, Molnar's prediction was sealed long before he was even born.