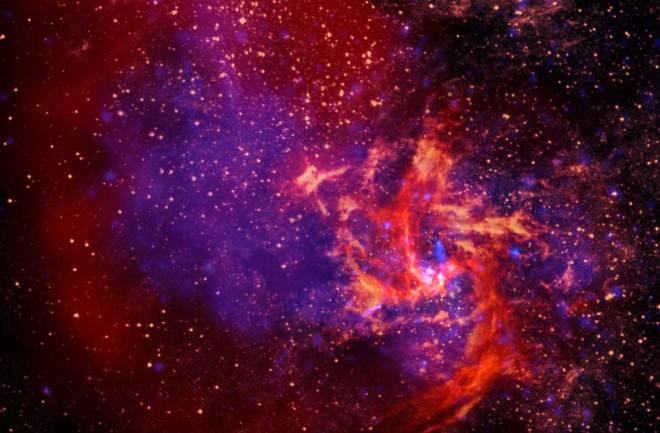 The center of our galaxy harbors a supermassive black hole and a tumultuous, active, high-energy environment. (Credit: NRAO/AUI/NSF; NASA Hubble, Chandra) As I write this, a conglomeration of radio telescopes scattered across Earth are acting as one giant instrument to try to image the supermassive black hole at the center of our galaxy. It’s no easy feat. A black hole, by definition, is so dense and the gravitational pull so strong that not even light can escape its confines. So how can an object that can’t emit light and that doesn’t reflect light be observed? By looking for its shadow, and that’s exactly what the so-called Event Horizon Telescope is doing.

Black holes are common objects in the universe. We think each star at least 30 times the mass of our Sun ends up as a black hole. Thousands and thousands of stars that size live in just our Milky Way Galaxy. Then there are the really massive black holes, the “supermassive” ones. The center of every large galaxy contains one of these, and each harbor millions to billions of times the mass of our Sun. All the 4 million solar masses of our galaxy’s supermassive black hole, called Sagittarius A*, is crammed tightly together, compressed into something that would sit inside of Saturn’s orbit around our Sun. That physical size — some 20 million kilometers wide, if you’re curious — would appear about 20 millionths of an arcsecond on the sky. (An arcsecond is a unit that astronomers use to measure an angle on the sky.) If my math is correct, that’s pretty similar to the size that a golf ball on the Moon’s surface would appear to us from Earth. Sagittarius A* takes up a tiny swath of the sky, but astronomers think that linking together radio telescopes based in Chile, Hawaii, Arizona, Antarctica, and the French Alps — plus a few others — will allow them to see small enough details to image that black hole’s shadow against background light. The black hole’s gravity warps light that passes close, but not so close as to “fall” in, and so this warped light bends around the unseen mass. (An analogy is when you’re looking at holiday lights through antique windows. Areas where there’s more glass will warp those background lights more than areas with less glass.) The light that bends around the black hole’s boundary of no return ends up outlining that event horizon region. Each individual telescope in this full-Earth array is looking at a specific color, or wavelength, of light: 1.3 mm. This light isn’t stopped by intervening dust or gas, so all the nebula and star clusters that lay between Sagittarius A* and Earth won’t block the view The Event Horizon Telescope has looked toward the center of the Milky Way several times in the past few years and spied hot gas in turmoil very close to the black hole. This new observation, which started on Wednesday and should last for 10 days, has the eyes of some of the most powerful radio telescopes on Earth. The South Pole Telescope and ALMA (based in Chile and having comparable resolution in radio light to what the Hubble Space Telescope can resolve in visible light) joined the array. Scientists are expecting big things. Last year at the winter American Astronomy Society meeting, Event Horizon Telescope team member Feryal Özel said astronomers expect to measure the size of Sagittarius A* to a precision of 4 percent. They’ll be able to study the turbulence just outside of the black hole, a region where magnetic fields and the extremes of gravity play. According to a recent release from the European Southern Observatory — one of several partners who run ALMA — we should expect the first results late this year.

But that’s not all

Our supermassive black hole is relatively quiet, but many others are not. They somehow shoot out jets of material moving nearly as fast as light, and those jets can energize gas at the outskirts of their home galaxies. But we don’t really know how those jets form. We haven’t ever seen close enough to an active black hole’s event horizon to obtain that information. Luckily, a nearby galaxy just might hold the answer.