Image of the Day: The Transit of Mercury 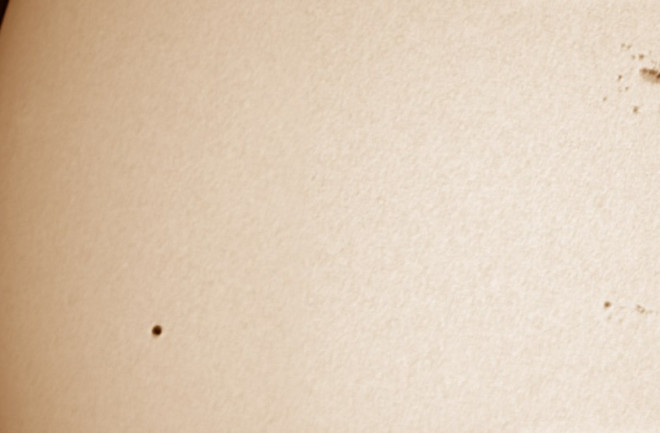 A photo mosaic taken at 8:15 local time shows Mercury, the sun’s limb, and the sunspots AR2542 (top) and AR2543. (Credit: Ernie Mastroianni) As astronomical events go, Mercury’s solar transit was not as spectacular as say, a solar eclipse, but many observers on this sunny Boston day enjoyed the view of a relatively rare event last seen nearly 10 years ago. Some were getting their first-ever glimpse of the innermost planet. As seen through my telescope with a solar-safe filter, Mercury appeared to be little more than a diminutive dot as it drifted across the solar face, which is nearly 160 times its apparent diameter. The innermost planet is only 3,002 miles across, while the sun spans nearly 865,000 miles. The math doesn't add up because Mercury is closer to the Earth than it is to the Sun. The transit, viewable from most places in the world, began as a small indentation on the left edge of the solar disk at 7:12 a.m. Eastern time. A few minutes later, the entire disk was visible against the Sun’s face. Over the next several hours, the planet moved steadily across the lower third of the sun before disappearing entirely off the right edge by 2:42 pm. Because the telescope’s solar filter blocks out all but 1/1000 of 1 percent of the light, Mercury was invisible before and after appearing on the sun’s face.

The setup for photography: A vintage Questar 3.5 telescope with a solar filter and a high resolution webcam. Image processing and uploads through a Macbook Pro and a tethered iPhone. (Credit: Ernie Mastroianni)Mercury orbits the sun in a speedy 88 days and takes its name from the fleet-footed Roman god. It’s visible a few times a year as a moderately bright star shortly after sunset or before sunrise, but never for more than a couple weeks at a time and never very far from the sun. If you're searching for Mercury in the sky, knowing where to look is essential. The last time Mercury passed between the sun and earth was November 8, 2006. It will happen again on Nov 11^th, 2019, and occur a total of 14 times this century. During the seven-centuries between 1601 and 2300, Earth has seen or will see 94 such transits, with a third occuring in May and the rest in November.