If You Wait Long Enough, There *Is* Sound in Space 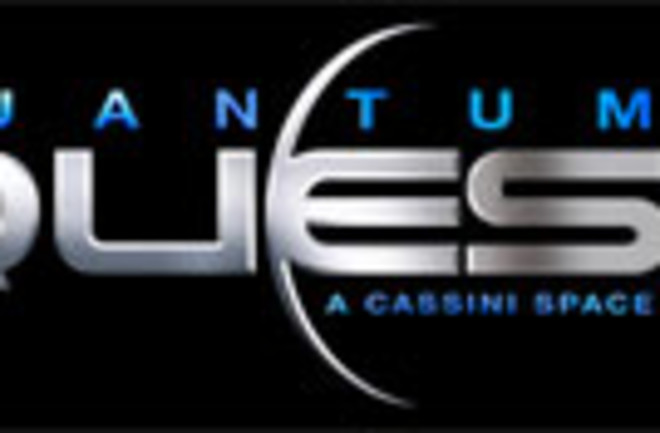 When Harry Kloor won the grant from the Jet Propulsion Laboratory (JPL) in 1997 to make a film about the upcoming Cassini-Huygens mission, he knew it would be over a decade in the making: Cassini wouldn't begin to send back data until 2008 at the earliest. It's been worth the wait. Since the probes started sending data back to Earth, scientists from JPL have been helping Kloor's team turn it into the most accurate visual renderings of first few planets of the solar system anyone has ever seen. These reputedly amazing visuals will form the bread and butter of Quantum Quest, an animated, science-fiction, large-format film film that's now been 12 years in the making. Each rendering will be founded on contours developed from radar data, and then surfaced over with visual data, all merged together through CGI. And although the plot will feature a crew of talking neutrinos and photons taking a "solar safari" from the sun to Saturn's moon Titan, all the space visuals, Kloor swears, will be real. But unlike the real solar system, in Quantum Quest, there will be sound in space. Naturally, this isn't the sort of explosions and lasers we heard in Star Wars or Serenity. Quantum Quest aims for a more exacting standard of scientific precision (aside from the talking particles). I had a chance to talk to Kloor and his composer, Shawn Clement, in the midst of the madness of Comic-Con. First, he explained that the Huygens Probe did actually record sound (while it was in Titan's atmosphere) and transmit it back to Earth. But more of the film's score is inspired by radio signals Cassini detected coming off the rings of Saturn, rather than actual sound. Of course, the human ear does not, as a rule, "hear" radio signals. To get around that, sound engineers "frequency shifted" the signals down into the audible range. Another challenge was that the sounds were also very long; they didn't modulate quickly. So to get them into a format that could be used in a film, engineers compressed the signals into smaller packages. Kloor said these manipulations were necessary, but don't alter the fundamental shape of the sound. Clement never had to deal with any of this himself. He and the sound magicians at Skywalker Ranch, who are handling the background folio for the film, got the samples already in audible form. To write the music, Clement started mucking around with the sounds in his synthesizer, but found that it wasn't really working. So instead he went old-school and busted out a guitar and a violin. "What I did with those was mimic those sounds a lot," he said. "But I was able to manipulate that and do what I wanted to do. It worked out really, really well. You’re hearing those sounds and hearing them shift and change and eventually, by the end, you get the full orchestra." Clement sent me a couple of clips of his music: Neat-o space sounds inspired by radio waves from Saturn's rings After all these years, the film is finally due out in February 2010.