If Wormholes Exist, Could We Really Travel Through Them?

Wormholes could offer a path to the most distant places in the universe. 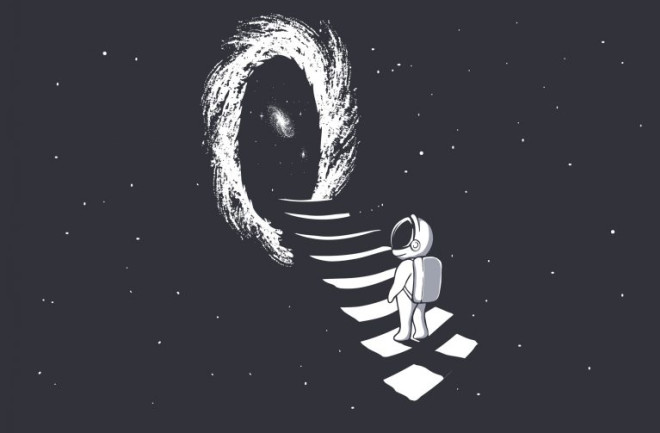 Wormholes make the best shortcuts in the universe. That’s true in a literal sense, since the theoretical things can connect distant corners of the cosmos (or even different universes), allowing a traveler to go someplace without having to visit everywhere in between.

But wormholes also present the perfect way for writers to get around that pesky speed of light, the universe’s speed limit and impediment to fast travel through the cosmos. If characters in science fiction aren’t taking months or years to travel between worlds, a wormhole is likely the reason.

Too bad, then, that as far as we know, the things don’t exist.

Oh, wormholes could exist. We just don’t know whether they actually do. Or, for that matter, if they’d be useful to us as potential shortcuts.

But ever since Albert Einstein published his general theory of relativity, we’ve had the mathematical language for describing and imagining these fantastical structures. Back then, though, scientists referred to them as “one-dimensional tubes” and simply “bridges” — in fact, the term “Einstein-Rosen bridge” is still used semi-interchangeably with “wormhole” (the “Rosen” being Israeli physicist Nathan Rosen).

It was American physicist John Wheeler who coined the vermicular vernacular in a 1957 Annals of Physics paper: “This analysis forces one to consider situations,” he wrote, “where there is a net flux of lines of force, through what topologists would call ‘a handle’ of the multiply-connected space, and what physicists might perhaps be excused for more vividly terming a ‘wormhole’.”

It’s a lucky thing, because that vivid name helps describe just what the heck we’re talking about. The curvature of space and lines of force might not mean much to most people, but who can’t imagine a worm eating its way through an apple or piece of timber? The resulting tunnel, connecting one part of the surface with another more distant part, is the perfect metaphor for something that can connect otherwise remote locations in the universe.

And, because Einstein also showed that space and time are fundamentally interconnected, traveling through a wormhole might not only take us to another far-away place, but it could even serve as a shortcut to another time.

The term wormhole was coined in 1957 by American physicist John Wheeler. He named them after the literal holes worms leave behind in fruits and timber. Before that, they were called one-dimensional tubes and bridges. (Credit: Interior Design/Shutterstock)

No wonder, then, that they’ve become so popular in science fiction. In real life, the speed of light is the end of the line: Nothing with mass can ever accelerate faster. That means sunlight takes over 5 hours to get to Pluto and years to reach other star systems. And it’s the rare story that benefits from forcing its characters to sit around waiting years to get anywhere.

Wormholes, thus, are the perfect way to bypass Einstein’s speed limit, and get your heroes and villains to travel the galaxy in a reasonable time frame. Plus, they allow for the element of time travel to enter the story, all without breaking any laws of physics.

So, the real question is: Can actual people take advantage of wormholes too? The answer is… maybe?

The first problem for any explorer determined to survey a wormhole is simply finding one. While Einstein’s work says they can exist, we don’t currently know of any. They may actually be impossible after all, forbidden by some deeper physics that the universe obeys, but we haven’t discovered.

The second issue is that, despite years of research, scientists still aren’t really sure how wormholes would work. Can any technology ever create and manipulate them, or are they simply a part of the universe? Do they stay open forever, or are they only traversable for a limited time? And perhaps most significantly, are they stable enough to allow for human travel?

The answer to all of these: We just don’t know.

But that doesn’t mean scientists aren’t working on it. Despite the lack of actual wormholes to study, researchers can still model and test Einstein’s equations. NASA’s conducted legitimate wormhole research for decades, and a team described just this year how wormhole-based travel might be more feasible than previously thought.

That research concerned one of the most popular conceptions of wormholes, with black holes serving as one of the openings. But black holes are famously dangerous, possibly stretching apart anyone who approaches too close. It turns out, though, that some black holes might allow objects to pass through relatively easily. This would allow a traveler to explore the space beyond, and thus eliminate one of the biggest hurdles to entering such a wormhole. But again, that’s only if they exist in the first place.

So, until we either find an actual wormhole to study, or realize that they can’t help us explore the universe, we’ll have to do it the old fashioned way: By taking rockets the long way around, and taking our minds on fictional adventures.