If <em>Pacific Rim</em> Followed Its Own Math, The Kaiju Would Have Won 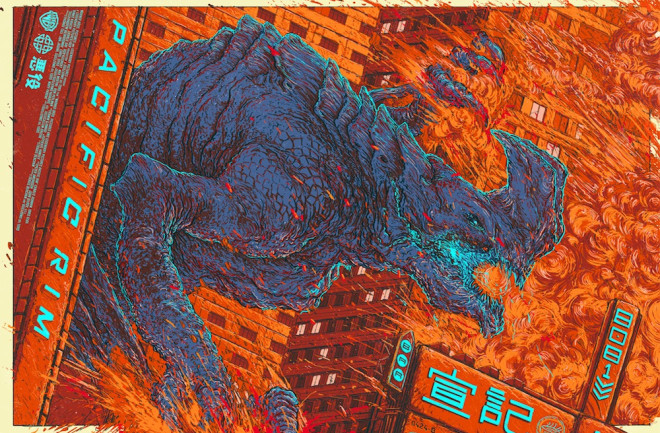 Click to enkaijunate In the microscopic serenity of a test tube, bacteria multiply exponentially. Given enough food and space, the population will quickly double itself every few days or even hours. High school biology students might remember the math that goes along with this growth—something in the form of P=e^rt (like the shampoo, professors urge students to remember). Interdimensional monsters from the film Pacific Rim invade Earth in much the same way. In Pacific Rim, kaiju researcher Hermann Gottlieb is quoted as saying:

In the beginning the Kaiju attacks was spaced by twenty-four weeks, then twelve, then six, then every two weeks. The last one in Sydney…was a week. In four days, we could be seeing the Kaiju every eight hours until they are coming every four minutes.

Gottlieb's timeframe of a looming apocalypse has the numbers he needs to predict when the next kaiju will emerge from the “breach.” We can do the same. Unfortunately, even giving Gottlieb the benefit of the doubt, the data doesn’t make any sense. In the quote from Gottlieb, we learn that when kaiju first started appearing, the time between each “event” was half that of the previous interlude—24 weeks becomes 12 becomes 6. Then, most likely for dramatic effect, he skips ahead to where monsters are emerging from the sea every four minutes. If you assume the exponential shortening of time between events, like how bacteria grow (only in reverse), you get something like this:

The graph above shows just how quickly the number of days between attacks shortens as a function of each emergence. For example, the fifth kaiju to stomp onto land would arrive only 11 days after the fourth kaiju, which itself emerged three weeks after the third. Again, this mimics the relentless growth of bacteria. Both bacteria and the kaiju follow exponential equations—in this case

. That math hides a tremendously terrifying kaiju emergence rate. Imagine a checkerboard with standard checker pieces. On the first square you place one checker, half an inch tall. Following exponential growth, on the second square of the checkerboard you place two checkers, now a total of one inch tall. On the third square you place four checkers, on the fourth you place eight, and so on until you reach the 64^th square. Simply following exponential growth, the height of the checkers on the 64^th square should be about 73 trillion miles—almost twelve and a half light years up into space, well past our Sun and a few stars. Kaiju emergence, based on what the film says, is a bit different. Instead of doubling the kaiju population every so often, the time between emergences is like the checkers in reverse. You start with a large amount of time between attacks and before you know it there is a "Category 5" kaiju appearing every few nanoseconds. In short, if Gottlieb is on the right track with his math, things get apocalyptic pretty quickly. But how long would humanity have? Adding up all the time between kaiju attacks, assuming that having a kaiju appear every minute or less is certain doom, the Jaegers would have about 11 months before all hell broke lose. This is where the data and the film start disagreeing. According to the scholarly nerds who run wikis like this, the time between the first kaiju attack and the last (when the breach was sealed with a nuclear detonation) was 11 years. If you follow the math once more, the time between kaiju attacks after 11 years of emerging would be far less than the Planck time–possibly the smallest amount of time we could ever measure. Also, during that 11 years there were 46 confirmed kaiju attacks, while the math says less than 20 emergences would spell extinction. At least the novelization and official canon material of Pacific Rim are consistent in their disregard for their own mathematics. In an analysis of kaiju attack frequency over at Nerdometrics, the author catalogued all explicitly stated kaiju attacks and the time between them. He was expecting to find something similar to what I calculated—a simple and elegant exponential curve. Instead, he found this:

So, looking at the attacks individually, we don’t see anything even close to the math laid out by Gottlieb so forcefully in the movie. Pacific Rim still makes a good argument for cancelling the apocalypse quickly—if kaiju really were emerging like bacteria divide there would be a huge problem. But apparently the film is conflicted on how much of a problem emergence really is. Gottlieb insists that numbers are “as close as we get to the handwriting of God.” God gave you some bad information, Hermann -- Further Reading: Pacific Rim Physics (Part 1): A Rocket Punch is a Boeing 747 to the FacePacific Rim Physics (Part 2): In a Nuclear Explosion Bubble at the Bottom of the OceanImage Credits: Pacific Rim poster by toybot studiosKaiju attack graph via Nerdometrics