If A Planet-Killing Asteroid Threatens Earth, These Astronomers Have a Plan

Our technologies are on the verge of being able to save us. But it will be close. 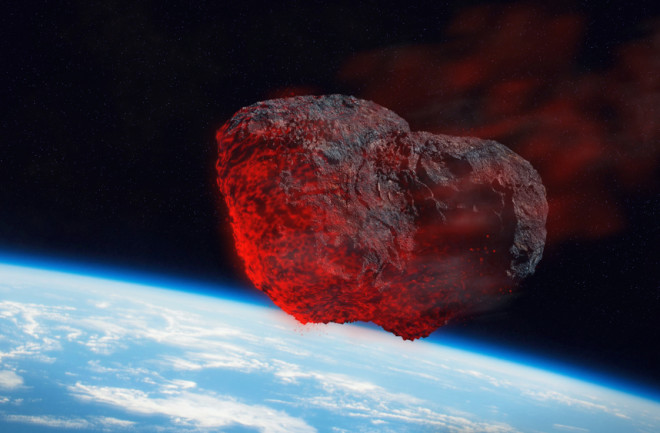 The popular Netflix movie Don’t Look Up is a satirical send up of two astronomers’ attempts to warn an indifferent world to the civilization-ending threat of an imminent asteroid impact. After its release, the film generated the most Netflix viewing hours in a single week.

At the heart of the movie is the question of what to do in the face of a threat from a 10-kilometer diameter asteroid heading straight towards us. That’s a similar size to the asteroid that that killed off the dinosaurs some 65 million years ago. If we had only 6 months warning, how could we save civilization?

Now we have an answer thanks to the work of Philip Lubin and Alexander Cohen at the University of California, Santa Barbara, who have worked out how the world can defend itself in such a situation and in what circumstances this defense would be futile.

The bottom line is that Earth could probably defend itself against a 10-kilometer asteroid given 6 months’ notice but anything much larger would be beyond hope.

There are several ways to defend against an asteroid impact. This blog recently examined the possibility of nudging an asteroid away from Earth. However, this takes time and certainly longer than the 6 months scenario that Lubin and Cohen investigate.

Another option is to attempt to vaporize the asteroid. This means converting it from a solid to a presumably harmless gas. That requires significant amounts of energy and Lubin and Cohen quickly show that this needs at least 50 times the entire world’s nuclear arsenal. “So, definitively NO, we cannot vaporize our target with nuclear weapons,” they conclude.

Another option is to blow up the asteroid into smaller pieces and allow these fragments to hit the Earth. While each smaller piece by itself would do significantly less damage than the initial asteroid, this approach is also doomed.

Lubin and Cohen point out that the fragments will still deposit the same total amount of energy into the atmosphere as the original asteroid. And this energy would generate an average temperature rise of 300 degrees Centigrade. Humans might survive such an incident if they had some kind of underwater refuge, say the researchers. “But the resulting damage to the Earth’s surface ecosystem would be truly catastrophic.”

Instead, Lubin and Cohen investigate whether it would be possible to blow up the asteroid with such force that the vast majority of fragments are redirected away from Earth. For this they suggest using the planet’s arsenal of thermonuclear weapons. The US B61-11 and W61 weapons, for example, are capable of delivering 340 kiloton explosions. (By comparison, the Little Boy bomb dropped on Hiroshima yielded 15 kilotons.)

The plan is complex. First, these weapons would need to be launched towards the asteroid on the world’s most powerful rockets. These would include NASA’s moon capable Space Launch System or SpaceX’s Starship, both soon to be operational.

These devices then need to penetrate the surface of the asteroid to deliver the most effect punch. But that’s far from trivial. The B61-11 and W61 weapons are both “Earth-penetrators”, designed to explode after they have entered the ground.

However, they are designed to work after a ballistic impact with the ground at speeds measured in meters per second. By contrast, an Earth-impacting asteroid will be travelling towards us at tens of kilometers per second and perhaps as much as 100 km/s. Whether these weapons could still work after such an impact is far from clear.

Another source of major uncertainty is the efficiency of the explosion—the amount of explosive energy converted to kinetic energy of the asteroid fragments.

To get an idea of this, Lubin and Cohen give the example of an underground thermonuclear test carried out in Nevada in 1962, the so-called Storax Sedan Project Plowshare Test. This involved the detonation of a 104-kiloton device at the bottom of a shaft 194 meters deep.

“The blast displaced around 1.12 × 1010 kg of soil and created a crater about 390 meters in diameter and 100 meters deep,” say the researchers. It reportedly lifted the displaced earth in a dome 90 meters high.

With some straightforward calculations, the researchers calculate the energy required to do this lifting and say it is just 2.3 per cent of the explosive yield. That’s a tiny conversion rate.

The researchers point out that this is probably a lower limit because they have not taken into account various other energy transfer mechanisms, such as the generation of a 4.75 magnitude earthquake. However, they say it gives a sense of the efficiency of the coupling between an explosion and an asteroid.

In total, they say the destruction of a 10-kilometer asteroid in a way that sends most fragments away from us would require about 8000 of these thermonuclear bombs, each capable of delivering 100 kilotons, yielding a total of 800 megatons.

Of course, the US stockpile has moved on since 1962. This total yield is within its current capability, although whether the necessary rockets can be appropriately modified to carry them in the time available is not clear.

The calculations assume a 10 km asteroid, traveling at 10km/s towards us. Given a 6-month notice period, the rockets must launch 1 month later to intercept the target 1 month prior to impact. That doesn’t give much time for modifications or testing. “Current human capability is right on the edge of being viable to take on the extreme threat scenario we have outlined,” say the researchers.

Should anyone think that we would get much more notice than this, Lubin and Cohen give the example of Comet NeoWise. This had a diameter of 5 kilometer and passed closest to the Earth in July 2020, just 4 months after it was first sighted.

Thankfully Neowise passed safely by. But had it been on collision course with Earth, it could have approached us with a closing speed of up to 100 km/s, giving us very little time to respond. “The case of comet NEOWISE discovered in 2020 with only a 4-month warning is a cautionary tale,” say Lubin and Cohen.

These kinds of impacts, of course are rare. A collision with a 10 km sized asteroid is likely to happen just once every 100 million years, with the last 65 million years ago. The researchers conclude that with 6 months’ notice, “humanity could in theory defend itself with an array of nuclear penetrators launched 5 months prior to impact.”

That gives us some hope. In a nod to the Netflix film, Lubin and Cohen call their paper “Don’t Forget to Look Up”. For a different outcome given this scenario, the original film is well worth a watch.