Icelandic Earthquake Swarm Heads Towards Askja: What Could Happen? 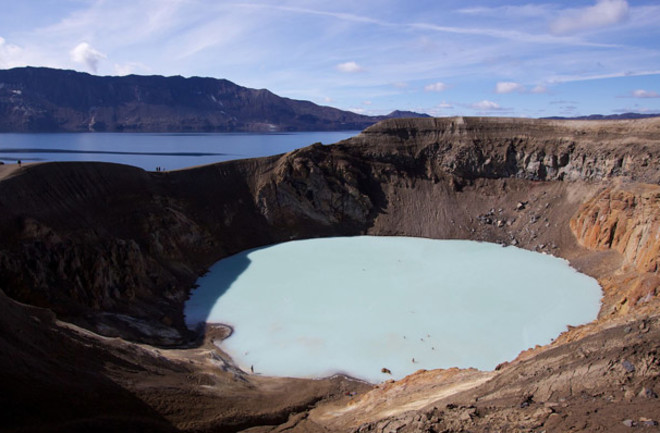 The Askja caldera in Iceland, with Viti crater in the foreground. Note the people bathing in the hydrothermal waters in the crater.

Boaworm / Wikimedia Commons on August 1, 2010. The earthquake swarm (and likely didn't cause an eruption just yet) that started on August 16 on the edge of Vatnajökull in Iceland continues. The Icelandic Meteorological Office reports that hundreds of earthquakes are still occurring under Bárðarbunga along with the northeastern edge of Vatnajökull, under Dyngjujökull and 5 km out beyond the edge of the ice cap. Larger earthquakes are still occurring around the ring fault of Bárðarbunga, including a M5.7 at about 6 km depth beneath the volcano. Overall, it looks like the IMO models (based on the earthquake swarm and deformation data) for this intrusion of basalt now estimates about 0.35 cubic kilometers of basalt have entered the upper crust under the region experiencing this increased seismicity. Remember, when volcanic eruptions occur, very rarely does all the magma erupt. For Iceland, a study by Crisp (1984) estimated that 3-6x the volume of erupted material remains underground. So, looking at the modeled volume data, that might be 0.05-0.09 cubic kilometers of magma that might erupt from that volume of intruded basalt. That isn't a huge volume, but for comparison, the 2010 Eyjafjallajökull eruption erupted ~0.18±0.05 cubic kilometers of magma (according to Gudmundsson and others, 2012). The IMO lays out what they think are the three most likely scenarios right now: (1) nothing happens - the intrusion peters out and the swarm stops; (2) the intrusion intersects the surface beyond the ice cap and an eruption dominated by lava flows occurs; (3) the intrusion intersects the surface under the ice cap and large glacial outburst floods (jökulhlaups) occur. They also mention what they think is an unlikely scenario: an eruption at the Bárðarbunga caldera. This is exactly how a volcanic mitigation probability tree works - you develop scenarios and assign a probability of each based on the monitoring data, prior activity or similar activity observed at other volcanoes. None of these scenarios are out of the question, but the available evidence does not preclude them. [caption id="attachment_1477121" align="aligncenter" width="660"]

The earthquake swarm on the northern edge of Vatnajokull. The earthquakes are color coded for days since the swarm started (August 16), with hot colors as the most recent earthquakes.

Icelandic Meteorological Office.[/caption] One interesting aspect of the current earthquake swarm is its northeasterly trend (see above) out from under Vatnajökull and towards another Icelandic volcano: Askja (which is still 15-20 km away). In 1875, Askja produced a VEI 5 caldera-forming eruption that was dominated by rhyolite ash and tephra - a high silica magma that isn't typically associated with Iceland. However, there are abundant examples of rhyolite volcanism in Iceland and people have even drilled into a rhyolite magma body in geothermal areas. That eruption released ~0.21 cubic kilometers of rhyolite (dense rock equivalent - that is, all the erupted material with the air removed). So, if we use the Icelandic intrusive-to-extrusive ratios, which might conservatively expect that around 1 cubic kilometer of rhyolite magma might still be under the Askja caldera. Now, this value is purely speculative because with rhyolite eruptions, sometimes you can evacuate much more of the magma stored due to the highly explosive nature of the eruptions, so we might have much less than a cubic kilometer of cooling and crystallizing rhyolite under Askja. However, there is likely some silica-rich crystal mush* sitting under the volcano. *What is a "crystal mush" anyway? Think of it as a mix of the minerals that have formed from cooling of magma (crystals) and any magma or fluids that remain (liquid). Mushes are likely ductile but behave like a solid, as in they are mainly network of crystals with liquid in-between, somewhat like a sponge. ****SPECULATION ALERT**** This is pure speculation on my part. So, what would happen if the intrusion continues to propagate northeasterly and intersects the magmatic system under Askja? Well, then we might have a scenario where rhyolite crystal mush is brought back to an eruptible state by new magma intruding - rejuvenation. This is something I study at Lassen Peak in California and Tarawera in New Zealand. Places where crystal mushes form can be rejuvenated by new intrusions and new eruptions can remobilize older crystals and magma. What could happen if the basalt in the intrusion intersects cooling rhyolite crystal mush? We need to look to other eruptions for examples. Scenario 1. The mixing of high basalt and cooling rhyolite adds to the explosivity of an eruption due to its higher silica and water content of the rhyolite. This is what likely happened during the second stage of the Eyjafjallajökull eruption in 2010 (see below). The first stage produced lava fountains and lava flows. However, when the intrusion intersected with a crystal mush under the main edifice of the volcano, the eruption became highly explosive. This was partly due to the interaction with the mush and partly due to the melting of ice on the volcano itself. The mush was the leftover crystals and cooling magma from the 1821-23 eruptions of Eyjafjallajökull but the trigger for the 2010 eruption was the intrusion of new magma. The final erupted magma was a hybrid of the basalt and rhyolite - an intermediate silica magma called andesite.

Eyjafjallajokull erupting on April 17, 2010. The explosivity of this phase of the eruption was strongly assisted by interacting with a rhyolite crystal mush under the volcano.

NASA Earth Observatory. Scenario 2. The basalt punches through the rhyolite to erupt without (much) mixing. This is what happened during the 1886 eruption of Tarawera in New Zealand. Tarawera has a large rhyolite eruption less than 600 years prior to the 1886 eruption, but the basalt that erupted was so full of volatiles that it punched through the rhyolite mush (and overlying solidified lava) to form a basaltic plinian eruption. The basalt from that eruption do have chunks of partially molten rhyolite and crystals in the basalt are compositionally more like ones you might find in a rhyolite, but it appears that either there wasn't time to mix them into a hybrid magma or the volume of basalt was so high (maybe as much as 2-5 cubic kilometers intruded) that it overwhelmed any rhyolite added. Scenario 3. The basalt merely adds heat to the system, causing a rhyolite liquid to be formed that is extracted and erupted. This is what I think happened during the 1305 AD eruption at Tarawera and is what has been seen at places like the Devil's Hills and Rock Mesa in Oregon, where younger feldspar crystals and juxtaposed with older zircon. This suggests that rhyolite liquid is extracted from an old mush (bring the tiny zircon with it due to the high viscosity of the rhyolite), then new feldspar crystals grow before the rhyolite is erupted. Scenario 4. The basalt and rhyolite mush mingle to form a magma that is incompletely mixed. This is what we find in eruptions at the Lassen Volcanic Field in California (and a lot of continental arc volcanoes related to subduction). The basalt appears to have entered the crystal mush, added heat but then broke into blebs that are erupted in a liquid that is more silica-rich that the basalt that intruded. This might suggest a lower ratio of basalt to mush, where the basalt is the source of heat to tip the crystal mush from being uneruptible to eruptible. We see this mingling in the record of plutons -- cooled magma that is exposed at the surface -- so it might be common in areas where the amount of basalt intruded is lower than in Iceland. UPDATE 12:30 EDT: Alison Graettinger (University of Buffalo) mentions a fifth scenario where any basalt under Askja misses intersecting with rhyolite mush altogether. This would just produce basaltic lava flows as has been seen around Askja over the past few decades. I would speculate that of the three scenarios, the first 2 are far more likely in the unlikely situation that the current intrusion reaches Askja and happens to intersect with a rhyolite mush under that volcano. We know we have a large volume of basalt intruding right now, so it would need to intersect an large volume of rhyolite mush to produce a hybrid magma like we saw at Eyjafjallajökull. The third scenario could happen, but would likely need a smaller volume of basalt not to remobilize and mix. The fourth scenario seems to be much more common in continental arcs, while Iceland is a hotspot, where most rhyolite formed by the crystallization of basalt and remelting of the crust. Remember, the scenario where the intrusion intersects with Askja is highly unlikely, so getting too concerned about disastrous giant eruptions is premature to say the least. However, whenever the potential for hot basalt to meet cool rhyolite is there, you can see that we can change the playing field quite quickly.