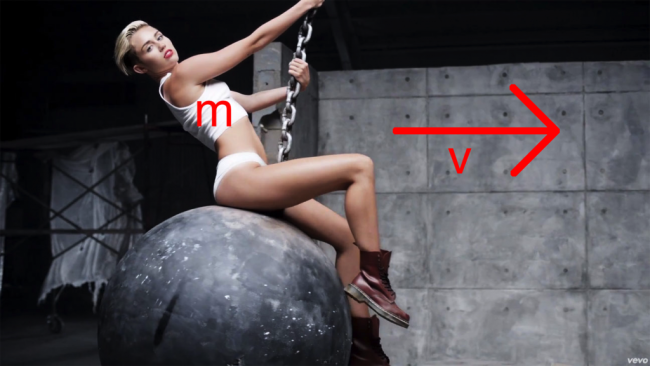 Yes, there is a paper in a scientific journal whose discussion concludes:

Based on these findings, it is clear that a human being cannot possess the characteristics of a wrecking ball without sustaining significant injury, and other objects should be sought as an analogy.

Who’s going to tell Miley Cyrus about this? Stick around for the science below* (and then stick your tongue out if you feel like it). I Never Hit So Hard In Love (Pulling 350 G’s) In the business of taking things literally, third-year natural sciences student David McDonagh from The Centre for Interdisciplinary Science at University of Leicester decided to consider Miley Cyrus’s smash pop song “Wrecking Ball” as a description of a person using themselves as an actual wrecking ball. His results (obviously) show that it’s probably a bad idea to literally smash someone’s walls with your body. An ordinary wrecking ball is a massive, incredibly durable object. It has to be to break down the buildings and structures we take so much time putting up. An average ball could be anywhere from 1,000 to 7,000 kilograms of solid metal. The material helps, but what really gets the work done is the swinging. When you swing a massive object, it gains a lot of momentum. And when that momentum suddenly changes—when the ball hits a wall—a huge amount of force is produced. That’s what makes it through concrete and steel and brick. So how good a wrecking ball would Miley be? Miley is nowhere near as heavy as an average wrecking ball, so to produce the same momentum, she would have to come in incredibly fast. Assuming she weighed 125 pounds**, she would have to come in like a wrecking ball at over 390 miles per hour to generate the same momentum. And what happens when this Miley ball hits a wall? Assuming a rapid deceleration, Miley pulls 350 G’s impacting the wall with over 198,000 Newtons—a force equivalent to getting hit with all the force rocketed out of a 747 engine at once. If Miley really did come in like a wrecking ball, she would never again hit so hard in love, because she’d be dead. -- Paper Reference: McDonagh, D. (2014). The viability of coming in like a wrecking ball. Journal of Interdisciplinary Science Topics. LINK *If you are asking yourself why anyone would ever care about something like this, please refer to the following GIF. **I used different numbers than the paper, as McDonagh put Miley’s weight far above a skinny, fit twenty-something.