Putting yourself in a trance can bring bliss—no pocket watch or creepy magician needed. 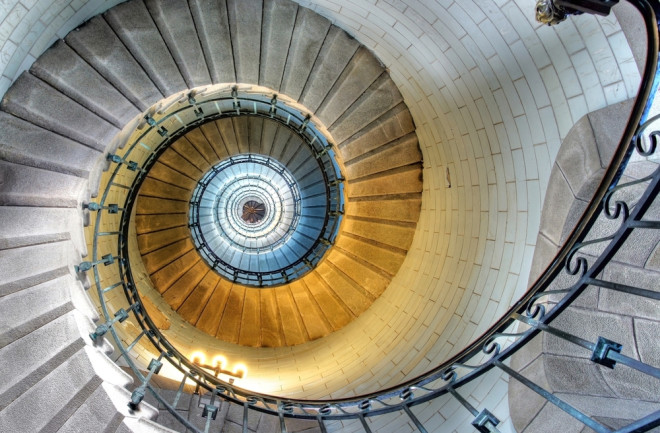 “You are standing at the top of a flight of stairs. It leads into darkness. The stairs are not steep. And there is a banister...”

For the record, every flight of stairs I’ve ever fallen down has had a banister. Indeed, on several occasions the banister has been the problem, or at least has contributed to the damage. And yet I feel no fear.

“Flight deck again, ladies and gentlemen. We’ll be starting our descent in a few minutes, so if you need to get up and use the restroom, this might be a pretty good time to just go ahead and do that.”

This might be a good time to mention that I’m sitting on an airplane, hurtling through the night à la Joni Mitchell toward points unknown, certainly points unimportant.

My eyes, it should be noted, are closed, and there is drool creeping down my chin. For I am in a trance, a proper hypnotic one, courtesy of the kindly, middle-aged woman in the seat next to me. We had been chatting idly, until after several miniature wines and a riveting discussion of her primary business—traveling Tupperware salesperson—she declared herself to be trained, or at least licensed, in hypnotherapy.

The interesting thing, however, is this: Had she not been there, I was planning to hypnotize myself anyway, courtesy of an iPod-like device I happen to have in my laptop case—a brain wave–altering pocket hypnotherapist known to neurotic techies as the Pzizz.

The Changing Fortunes of Hypnosis

Back when I was a child, people generally refrained from hypnotizing one another. To me and my schoolmates, hypnosis was known as one of the powerful forces—along with heroin, the Moonies, the writings of Ayn Rand, and Ouija boards—in which one dabbled at one’s peril. Urban legends abounded of mild-mannered suburban dads being turned into chickens by some waggly fingered narcissist in a cape at a magic show, and never changing back. Fortunately, the tools of hypnosis were hard to come by. To put a fellow human being into a hypnotic trance, it was well known one needed both (a) a pair of deepset, ineffably powerful eyes and (b) an old Victorian pocket watch on a chain.

From time to time, people would come across (b) in some sort of old shoe box in an attic and charge into school the next day with the thing secreted about their person and visions of conscripting a personal zombie strike force. Only then would they learn the importance of (a) and realize that they’d yet to actually even meet anyone with (a). And in this way the social order was allowed to persist.

Oh, how young we were. In our Modern Age, hypnosis is close to ubiquitous. As a man who gets most of his news from supermarket tabloids, I am uniquely qualified to tell you that Lindsay Lohan enlisted a hypnotist to help address her addiction to shopping and that hypnosis might offer relief to sufferers of irritable bowel syndrome, hair loss, or low sex drive. Hypnotherapy institutes are proliferating like the field mushrooms their founders generally enjoy consuming in pasta-and-soy-cheese casseroles. And, what would have been most alarming of all to the uncomprehending rubes of yesteryear, people have taken to hypnotizing themselves. Enter the Pzizz.

The Pzizz is a software package and, now, an iPhone app designed to generate, through headphones, a unique hypnotic experience of the user’s chosen length. (The gadget I have, I regret to say, is no longer for sale.) In time, according to its manufacturers, I could expect to see an across-the-board improvement in both my state of mind and my quality of life. The supporting literature accounts for its efficacy in terms of “binaural beats.” Each headphone plays a tone of a slightly differing frequency, which creates a pulsating beat that is felt but not heard (because it is below the range of human hearing). Supposedly your brain’s electric signals alter in frequency to match this beat, and altered signals mean altered consciousness. In other words, the Pzizz produces a gentle sluicing back and forth of one’s brain waves, and a state of hypnosis ensues.

Which is presumably when one starts taking seriously the suggestions of a strange, possibly Australian man who has been talking to you through your Pzizz headphones with the same sinister authority that the ghostly barman uses while urging Jack Nicholson to “discipline” his family in The Shining. His suggestions, however, are more benign. “Each breath can be another step deeper into pleasant and relaxing feelings,” he likes to murmur. “While you’re resting, somewhere at the back of your mind you might consider that the more deeply you relax, the more energized you’ll feel... Learning to relax is a skill that will help you when the pressure’s on...”

If these sentiments sound familiar, that’s because they are—they echo the classic hypnotalk we parroted in the school yard. Herein lies the key, I believe, to the hypnosis renaissance: It isn’t a renaissance. Hypnosis is not what we thought it was. The notion of hypnosis as a technique by which Person A can steal the autonomy of Person B was, with hindsight, of too much value to Hollywood screenwriters for them not to have mounted a campaign to convince us that this was the case.

Hypnosis, it turns out, is nothing but a state of relaxation too palpable to be deserving of a name other than regular consciousness. And it is very hard to be even slightly relaxed unless one is in full possession of one’s autonomy. To know true peace, one needs to be able to lay one’s hand atop one’s free will and know that it is there, like the jangle and poke of car keys beneath the soft gabardine of one’s trousers. A hypnotist cannot make you do anything you don’t want to; she can merely propose activities for your unusually open mind to weigh the merits of. Were the woman in the next seat to tell me, for instance, that I should (a) assassinate World Leader X next July 12 and that (b) I will have no memory of her telling me to do so, even under hypnosis I would have no problem telling her that (b) is not an option and that (a) is either not going to happen or is going to require a cash payment in the low nine figures, depending on which world leader we’re talking about.

For all the blather about binaural beats and neurolinguistic programming, the 21st-century hypnosis currently rescuing our starlets from the demons of their own nature is nothing but good old-fashioned 20th-century self-affirmation set to a New Age score of trip-hop backing tracks and whale belches. Today’s hypnosis is last year’s focused meditation is the previous year’s creative visualization, and so on, all the way back to Norman Vincent Peale’s The Power of Positive Thinking in 1952.

The Power to Change

Which is not to disparage techniques currently nestled under the banner of hypnosis. On the contrary. The power to change oneself by telling oneself how one would like to be different may not have been discovered yesterday. But it was only yesterday—relatively speaking—that we emerged from a century dominated by the idea that self-change was largely impossible.

For a hundred years, thanks to Freud, we crept about convinced that in the deeper parts of our brain lay only horror, hence our fear of hypnosis. We were convinced that any part of the brain not directly accessible to the conscious mind was an unspeakable archive of murderous fantasies and grisly recollections of our parents stepping out of the shower. The last thing we were about to do was shut down our conscious mind and let some stranger poke around back there in the dark recesses, especially not some eccentric woman on a night flight to Ohio.

But you know what? There’s nothing back there, nothing terrible anyway. Having led me down an imaginary staircase to the depths of my soul, my accidental hypnotist has me open a door and step through into what she tells me is the core of my being, the chamber of my most private thoughts and feelings.

And it turns out to be an exact replica of the extremely dark downstairs cocktail lounge of the old Gramercy Park Hotel in Manhattan. No monsters, no naked parents, just a bunch of mismatched faux-Regency furniture upholstered in velvet you could strike a match on. I can come back here anytime, she tells me. At times of stress or deprivation, I can come back here, order a giant whiskey, have a seat, and ride it out.

With that, the plane banked down into Cincinnati, and my hypnotist hastily had me lock the door to my secret room, slip the key into an imaginary pocket, and hustle back up the imaginary stairs. She counted off the uppermost five, clapped her hands, and I was back, massively refreshed, sensory organs cleaned and peeled, and newly open to the idea that after a century of Freudian angst, it may be time for the mercilessly introspective human animal to put its feet up, cue the whale song, and finally—finally—relax.