Hunting Ghosts Across the Cosmos 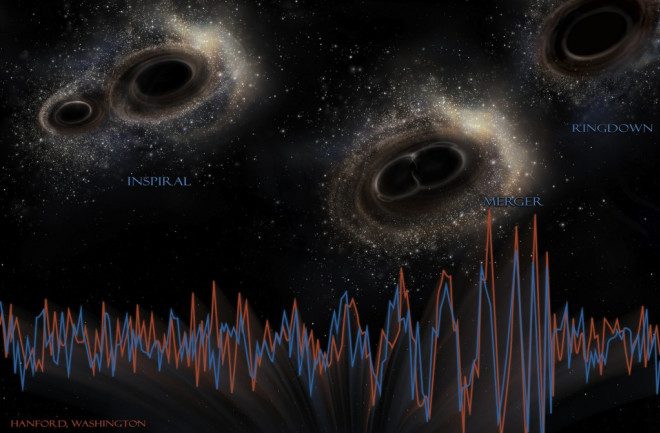 What we see versus what we believe: The bottom signal represents the vibration signal at the two LIGO gravitational wave facilities. The illustration above indicates the astrophysical interpretation of the signal--two black holes merging into one. It has taken a century to come up with the concept and technology to track down invisible gravitational waves (Credit: LIGO, NSF, Aurore Simonnet) The recent discovery of gravitational waves by the twin LIGO detectors drove home the gaping chasm between the popular image of how astronomers explore the cosmos and the way it actually happens. In the layperson's view -- which, to be fair, aligns well with daily experience of how we find out new things -- exploration is a matter of looking, seeing, and understanding. In reality, most of what astronomers do involves looking without seeing, or seeing without understanding. It involves not just working at the edge of perception, but trying to deduce what lies beyond perception. At the risk of sounding unscientific, I'd call it cosmic ghost hunting. Look at the specifics of the first-ever confirmed gravitational wave signal (known as GW150914, in the businesslike style customary to people who are used to sifting through a lot of data). It was created by the merger of a pair of black holes, 29 and 36 times as massive as the sun. When the two collided and combined, the event briefly emitted 50 times as much energy as all the light from all the stars in the entire visible universe. The event literally shook the foundations of space and time. And we could barely see it, or more accurately, we could not see it at all. There is, as yet, no confirmed radiation signal of any kind associated with the black hole merger; it began in blackness and ended in blackness, shining only in gravity. The actual signal from GW150914 took the form of a subtle squeezing and stretching of the two LIGO facilities in Louisiana and Washington state. The amount of squeezing: about 1/10,000th the diameter of a proton. The effect is so subtle that it's taken scientists more than four decades to come up with a workable device that can pick it up. The effect is so obscure that the physicists working on LIGO disagreed passionately about whether the "O" in the name could be justified. The "O" stands for "Observatory"--but is that the right term for an experiments that picks up things that fundamentally cannot be observed?

This is how astronomers actually "observe" gravitational waves. (Illustration from the discovery paper by Abbott et al) LIGO is just the latest and most dramatic example of cosmic ghost hunting. Another notable one is the discovery of dark energy, a kind of antigravity effect that is causing the expansion of the universe to accelerate. And how do we know this? Well, the story began with teams of researchers who were trying to measure the deceleration of the universe, on the assumption that the mutual gravitational pull of all the galaxies should be slowing things down. OK, and how do you do that? Ah, here come more ghosts. You cannot directly observe the expansion of the universe. You have to infer it by the way that the light from extremely distant stars is stretched by the stretching of space, which causes the light to lose energy and become redder. To deduce how the rate of expansion is changing, you have to take on an even more complex problem. The way to solve it is to look at how much the light of a distant supernova (exploding star) has been stretched and reddened, and then compare that to how much the light has been dimmed by distance. Then there's a whole other calculation needed to figure out the true brightness of the star and to compare it to the light collected by the digital detectors at the observatory. Human eyes are not involved in any stage of the process. The astrophysicists crunching the numbers uncovered a ghostly effect: The universe was not slowing down as expected, but speeding up. That acceleration is a symptom of dark energy--not that we know what it is, exactly, we just know broadly what it does. It is an energy that pushes things apart. It is everywhere, and it cannot be seen. It haunts the universe. Even seemingly tangible things like planets around other stars mostly exist not as visible things but as indirect interpretations. The Kepler Observatory, which is responsible for the bulk of the exoplanets discovered so far, finds alien worlds by watching their shadows as they pass in front of their stars. That may seem fairly concrete, but there are a lot of things that can cause a small variation in a star's brightness other than a transiting planet. For five years, a team led by Alexandre Santerne from Instituto de Astrofísica e Ciências do Espaço examined the Kepler stars one by one, trying to understand exactly what they were seeing. In the end, they concluded that more than half of the inferred giant planets around other stars were not planets at all. They were the kinds of ghosts that vanish when you turn on the lights. Kepler scientists are now wrestling with another spectral presence, known as KIC 8462852, or Tabby’s star. You might also know it as the "alien megastructure" star, so called because its strange flickering could be caused -- possibly maybe -- by an enormous artifact orbiting around it. No obvious natural process can explain the star's peculiar behavior. Then again, we are operating at the edge of perception here, in the zone where it is easy to mistake unusual or misunderstood effects for things that fit into a neat narrative that attracts a lot of media attention--something like an alien megastructure, for instance. Anyone who has ever watched the silliness of the television "ghost hunter" shows will know how easy it is to mistake signal for noise when you are operating at the edge of perception, how easy it is to get swept up in hypotheses when you do not have enough data to constrain them. The LIGO folks are certainly aware of the perils of ghost hunting, which is a big part of the reason why their task has taken so long. By the team's calculation, a signal like GW150914 could happen by chance just once every 203,000 years. This ghost, at least, seems to be the real deal. Follow me on Twitter for astronomy news and insights: @coreyspowell