Hunting for Clues to Why the Last Mammoths Disappeared 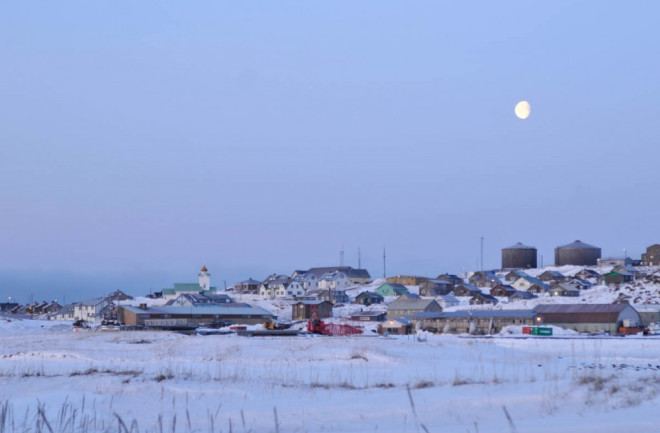 The town on St. Paul Island. Photo by Jessica Marshall As the wind whips across the Bering Sea, for an instant it courses over a tiny speck of land called St. Paul Island, far off the coast of Alaska. At the peak of the last ice age some 21,000 years ago, this dot in the middle of the ocean was a volcanic mountain at the southern edge of the Bering Land Bridge, yet as the ice melted and seas rose, its black cliffs became shorelines, trapping ice age fauna on its landscape, the most massive of them the woolly mammoth. I’ve come to St. Paul with a team of six researchers bent on solving a mystery surrounding the mammoths of St. Paul Island: Mammoths survived here for nearly 2,000 years after the last mainland mammoths disappeared from Siberia 8,700 years ago. Trapped here on the island, the mammoths were somehow protected, and the researchers, led by paleontologist Russ Graham of Pennsylvania State University, want to know why. They want to know exactly when the mammoths disappeared from the island, and whether their ultimate demise can help settle the controversy of why mammoths went extinct elsewhere. Did people, a changing climate, or something else kill the last of the mammoths?

Evidence in the sediment

To seek answers, the team will make their way on snowmobiles dragging gear-laden sleds to a frozen crater lake, what would have been a primary watering hole for the island-bound mammoths. Standing on the ice, researchers will drive a steel barrel into the mud below to collect sediment cores stretching back more than 10,000 years. The layers of sediments are filled with evidence — pollen grains, volcanic ash, heads of insect larvae, and perhaps leaf fragments or seeds — that the researchers can use to reconstruct the past: the types of plants that lived nearby, the climate and hopefully, evidence of the mammoths. If all goes as planned, they will find two key clues preserved in the mud: mammoth DNA, shed while the mammoths sloshed about in the watering hole; and spores from a fungus that can only live in the dung of large plant-eaters. The disappearance of these tracers in the upper layers of the sediment record should mark the end of the mammoths, allowing the team to give a fairly precise date for the mammoth’s extinction. Under a rock in a cave on St. Paul a decade ago, Graham found a mammoth tooth that dated to 6,500 years ago, but mammoths may have persisted on St. Paul much longer. There is only one other place where evidence shows mammoths survived even later: on Wrangel Island near Siberia, mammoth remains date to 4,000 years ago, overlapping the civilization of ancient Egypt and the construction of Stonehenge, according toAdrian Lister’s Mammoths: Giants of the Ice Age. There is no evidence of humans on St. Paul until Russian fur traders arrived in the 1780s, which may be a factor in the mammoths’ long survival. Or, it may be that the island just got too small — today, it’s only 35 square miles, smaller than the city of Miami — to sustain a population of mammoths as sea level continued to rise.

In search of mud

Early spring on St. Paul Island. Photo by Jessica Marshall It’s not hard to imagine mammoths traipsing across the treeless, snowswept landscape. Although we touch down on St. Paul on a sunny first day of spring, subsequent days bring driving winds, snow, and biting wind chill temperatures. Most of the team’s gear gets bumped from the flight because of weight limits on the turbo-prop plane that carried us here, but even without their equipment, the team can’t wait to get a look at the site. So that afternoon we park near the airport and walk from the road toward the white radar spheres overlooking the lake. It’s about a mile’s walk across country. We reach the ridge at the lake’s edge. Below, a flat, unmarred plane of snow — the lake’s frozen surface — stretches beneath. Across the lake is a gentler slope leading down toward the shoreline — the obvious approach for a giant quadruped. The team stands in the sun, looking down, wondering what lies beneath. The next morning, it’s raining, and the rain turns to snow as the sun rises. No flights will land, meaning no gear, for three days. The team passes the time by meeting with community members, taking water samples at other sites, holding planning meetings — and working a jigsaw puzzle. Finally on Saturday night, project manager Soumaya Belmecheri hangs up the phone and yells, “The luggage is here!” When a truck backs up to the door a few minutes later, the team goes to work unpacking and preparing. The next day they will go in search of mud. In the morning, two black Arctic foxes — one of only two native mammals, along with a shrew, on the island — come close to watch as the team packs the sleds outside the field station where we’re staying to head to the lake. The team will spend four days at Lake Hill in all weather — sunny, bitterly cold, drizzly and damp, and overcast — to get their cores.

Researchers Nancy Bigelow, Jack Williams, and Soumaya Belmecheri drive the sediment corer into a hole in the lake bed. Photo by Jessica Marshall The work is dirty, physical and tiring. Apart from the gas-powered auger the researchers use to drill through the two-foot-thick ice, everything is manual. The team press their coring tube through the sediments, gathering a meter at a time. As they get deeper into the hole, the work gets harder, with siltier sediments and greater suction forces requiring more work to drive the tube down and pull it back up. By the end, everyone hangs their full weight off of a T-bar or a monkey wrench to try to penetrate further. They pull each core to the surface, the tube coated with oozing surface mud and water, and extrude what they’ve gathered into half of a black plastic pipe section. Near the surface, the sediments are like thick chocolate pudding, but at greater depth they are denser, like fudge, and a blacker brown. The shift happens at a depth that may be close to the age at which mammoths disappeared.

About 500 people live on St. Paul, mostly Aleuts, whose ancestors were brought to St. Paul from the Aleutian chain by Russian fur traders: The island is one of the most important breeding grounds for northern fur seals. Its major cultural landmark is a Russian Orthodox church dating to 1907 and topped with a yellow onion dome. Stacks of crab cages line the road to the airport; the snow crab season is winding down and chartered flights with workers from the seafood plant on the island will leave the island as we do. Word of our coming has gotten around and at several places we hear of locals who have found mammoth tusks or teeth. Graham makes plans to meet with them. One stormy day he and I meet with Simeon Swetzof, Jr., who keeps a 6’9” long tusk dredged out of the harbor in the 1980s on top of some freezers in his garage. Graham saws off a piece for dating. Graham leaves, along with Jack Williams, a paleoecologist at the University of Wisconsin-Madison, but the rest of the researchers and I stay behind for two days to pack and ship the gear and the mud cores. Project manager Soumaya Belmecheri, a post-doctoral researcher at Penn State, ships 44 meter-long tubes of mud to the LacCore facility at the University of Minnesota, Twin Cities, which will store, image and prepare the cores in advance of the team’s visit to the facility in late May. There, the group will cut chunks of the mud at intervals throughout the core for specific analyses: isotopes, pollen, or ancient DNA.

The team plays croquet on the beach. Photo by Jessica Marshall With the work done, there is time for a fieldwork tradition: a game of croquet. Matthew Wooller, a stable isotope biogeochemist at the University of Alaska Fairbanks, totes his travel set down to the beach, below a bank of enormous sand dunes, and sets it up. We play a cutthroat match, ice flying, on the snow-covered black sand, as chunks of sea ice press against the shore, the shore of the mountain in the middle of the Bering Sea.

Jessica Marshall is a freelance science writer based in St. Paul, Minnesota — where the weather is only slightly better than St. Paul Island, Alaska.