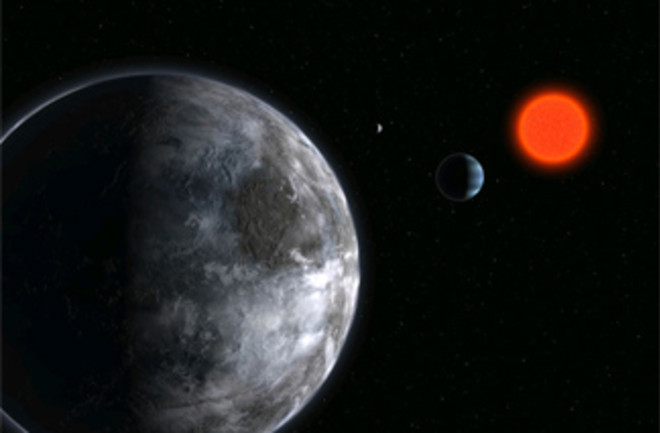 Artist's impression of the planetary system around Gliese 581. Courtesy ESO. The European Southern Observatory is reporting that they have found the most Earthlike planet yet orbiting another star. It has about 1.5 times the Earth's diameter, and five times its mass. This makes it the smallest extrasolar planet yet found (two other planets have already been found orbiting that star, with 15 and 8 times Earth's mass). This is amazing enough! But it gets far, far better. The parent star, Gliese 581, is a red dwarf, meaning it's smaller and cooler than the Sun. The as-yet unnamed planet orbits this star much closer than the Earth does the Sun; it stays about 11 million kilometers (6.7 million miles) from its star, while the Earth is 150 million km (93 million miles) from the Sun. But remember, Gliese 581 is cooler than the Sun, so at this distance the planet would actually be very temperate: models show it would be between 0 and 40 Celsius! If that doesn't grab you, then consider this: That is warm enough for water to be a liquid. So what we may have here is a terrestrial planet with liquid water on its surface. Let me be clear: this is not a guarantee! We have not actually gotten an image of the planet; its presence is indicated by the gravitational effect it has on its star as it orbits (once every 13 days, incidentally). So we don't know if the planet is dry, or covered in oceans, or even if it's rocky like the Earth -- though models indicate it will either be rocky or possibly even covered by oceans. And this planet is Earthlike, but not Earth! The surface gravity is more than twice that of Earth's (22 m/s/s versus 9.8 m/s/s on Earth) and who knows what the atmosphere is like. But the basic characteristics are certainly provocative! Almost all the planets detected using this method are more massive than Jupiter, and extremely hot, way too hot to be hospitable to our kind of life. Why is this planet important? Well, one of the major goals of science right now is to find out if life has arisen and evolved elsewhere in the Universe. Up until 1995 we weren't even sure if any other stars had planets! Now we know of hundreds, and as the technology gets better, we can find smaller and smaller ones. We're right on the verge of being able to find ones just like Earth. And while of course we cannot know if this newly found planet has life or not, it's our best bet yet! There is much more to learn about this planet. Getting an image of it is currently not possible: at a distance of 20 or so light years, Gliese 581 one of the closest stars in the sky, but still far too distant to separate the planet from the star. So I'm left wondering about this planet. Does it rotate once every orbit due to the gravitational interaction with its star? This is what has happened to every moon in the solar system; they spin at the same rate they go around their parent bodies, so they always show one face to their parent (which is why the Moon always has the same face toward us here on Earth). If so, how does this affect the atmosphere? Models indicate that the air should carry the warmth of the star around the planet, so the temperatures should actually be fairly moderate on both the day and night sides of such a world. But if it's covered by an ocean, how does having one side of the planet eternally locked into daylight affect it? Criminy, what would life be like on a tidally-locked ocean world? Wow. One of my favorite aspects of science is taking an idea and running with it. I don't encourage too much speculation beyond what's known -- and in this case we don't know all that much -- but it sure can be fun. Especially when what we're starting with is so exciting. So hat's off to the team of scientists who made this momentous discovery. May they make many more... and may their results get ever smaller, and ever cooler.