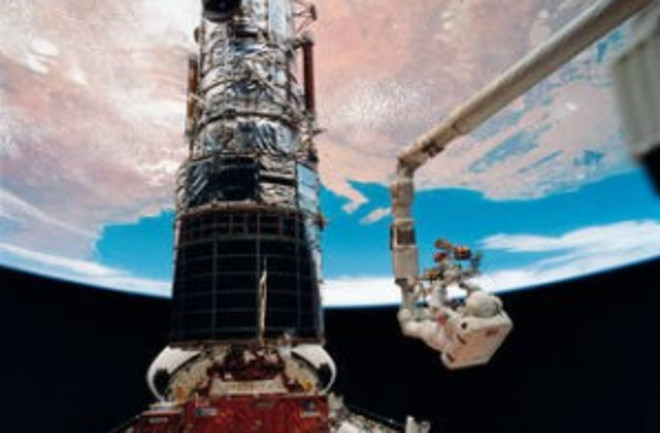 NASA's Hubble Space Telescope, photographed during the first astronaut servicing mission in 1993. (Credit: NASA) On Friday, NASA's iconic Hubble Space Telescope, our window into the universe since 1990, went into a protective safe mode after one of its gyroscopes failed. Hubble was built with six gyroscopes designed to keep the telescope pointed the same way for long periods of time. These six gyroscopes were replaced during a 2009 repair mission to the telescope. But, over the years, some of these gyroscopes have failed and stopped functioning properly.

The Trouble With Hubble's Gyros

Before Friday, Hubble had four working gyroscopes, also called “gyros.” But after the failure last week, the Hubble is now left with only two fully-operational gyros. "NASA is working to resume science operations," NASA said in an official statement said. "Hubble’s instruments still are fully operational and are expected to produce excellent science for years to come." The space agency says that at least three gyros are required for “optimal operations." Still, the telescope can function with just two gyros, and it could even continue observing the universe with just one. “The plan has always been to drop to 1-gyro mode when two remain," Rachel Osten, deputy head of the Hubble mission said on Twitter. "There isn’t much difference between 2- and 1, and it buys lots of extra observing time. Which the Astro community wants desperately,” The official Hubble Twitter account echoed this sentiment, tweeting that the telescope was “built with multiple redundancies,” and that even though it is left with just two gyros, it can work with just one.

Built with multiple redundancies, Hubble had six new gyros installed during Servicing Mission-4 in 2009. Hubble usually uses three gyros at a time for maximum efficiency, but can continue to make scientific observations with even just one gyro.

Osten officially confirmed this new development over Twitter after rumors swirled about the possible failure over the weekend. But, while Osten shared on Twitter that it has been a “very stressful weekend,” she also assured the general public that “we knew it was coming,” and that this gyro actually lasted longer than the team had initially planned for.

Not really scary, we knew it was coming. The gyro lasted about six months longer than we thought it would (almost pulled the plug on it back in the spring). We’ll work through the issues and be back. — Dr. Rachel Osten (@rachelosten) October 8, 2018

While this expected setback is certainly not positive news, it’s not a death sentence for Hubble. Officials have stated that they expect the telescope to last at least through 2020. The James Webb Space Telescope

, Hubble’s powerful successor, is currently set to launch in 2021. So, even if Hubble does continue to lose functionality or have expected issues like this gyro failure over the next couple of years, the James Webb should eventually be able to pick up where Hubble leaves off.