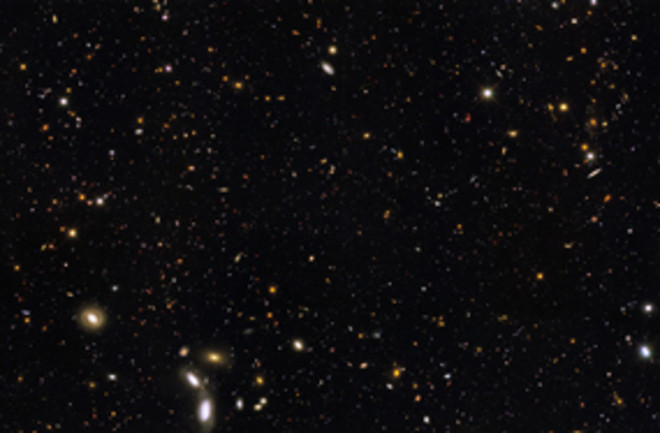 Back in December 1995, the Hubble Space Telescope created the now-famous "deep field" image, which took more than 300 exposures over the course of 10 days to peer deep into the history of the universe and spot more than 1,500 galaxies. A decade and a half later—after failures, upgrades, and the "ultra deep field"—Hubble marches on. Yesterday at the American Astronomical Society meeting, astronomers announced they'd used the telescope to look deeper into the past than ever before. The new image captures 7,500 galaxies of all kinds and shapes. The oldest galaxies in the image glow an intense blue, indicating high concentrations of the lighter elements hydrogen and helium.

Hydrogen fusion inside active stars creates heavier elements such as iron and nickel, which get spread across the universe when massive stars explode. These elements cause modern galaxies to glow in a rainbow of colors, so the extreme blueness of the newfound galaxies suggests that they formed before very many massive stars had lived and died [National Geographic News].

The ancient galaxies are also tiny by galactic standards, containing just one percent of the mass of our own Milky Way galaxy. But they could play an important role in showing astronomers how galaxies formed as the universe aged.

These galaxies started forming just 500 million years after the big bang, which is thought to have occurred around 13.7 billion years ago. That pushes back the known start of galaxy formation by about 1.5 billion years [National Geographic News]

. Hubble captured this newest image with its Wide Field Camera 3, a new piece of equipment that the last space shuttle flight to upgrade the telescope installed last year. But unanswered questions remain.

The big mystery is the era when ultraviolet light from the youngest stars electrically charged early clouds of interstellar gas, triggering magnetic effects that played a role in later galaxy formation, says astrophysicist Mario Livio.... This "re-ionization" era probably played out just before or during the time when the lives of the early galaxies turned up in the new Hubble images [USA Today]

. Hubble's would-be successor, the James Webb Space Telescope, could help sort out this era's history when it launches in 2014. Related Content: 80beats: Prepare to Be Amazed: First Pics from the Repaired Hubble Are Stunning 80beats: Space Shuttle Grabs Hubble, and Astronauts Begin Repairs 80beats: A Hot Piece of Hardware: NASA's New Orbiter Will Map the Entire Sky in Infrared Cosmic Variance: Well, That Was Fast, on the upgraded Hubble's initial data Bad Astronomy: Hubble's Back, and Spying on Wailing Baby StarsImage: NASA