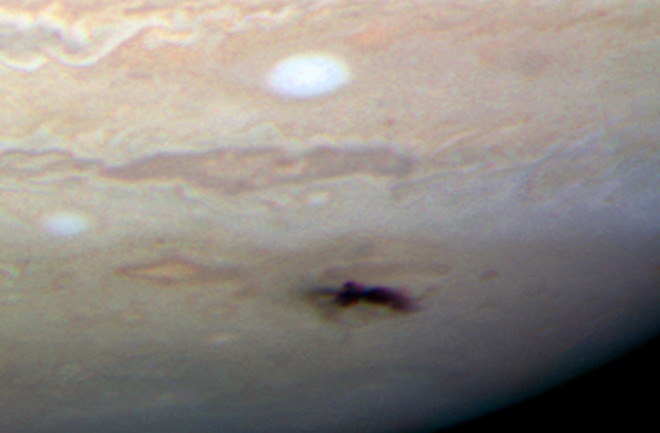 If you’re looking for the back story, you can read my description here. This new image is really something. The colors are not precisely natural, but close: three filters that pass red, green, and blue light were used to approximate a true-color picture. In reality, the filters used let through a very narrow range in each color, while our eyes detect a much wider range; that’s why I said "approximate". I’m guessing that narrow-band filters were used because Jupiter is hideously bright, so those filters would allow for decent exposure times without frying the camera.

The black spot is huge, nearly 10,000 kilometers across, making it roughly the size of the Earth. It’s composed of dust, basically vaporized whatever-it-was-that-smacked-into-Jupiter. Probably an asteroid; a comet would’ve been spotted before the impact (because they are brighter), and no one saw it. The impactor itself was probably several hundred meters across, and the explosive energy release (in non-sciencey speak, the gigantic kaboom) would’ve been measured in the tens of thousands of megatons. Given that the largest nuclear weapon ever detonated on Earth was about 50 megatons, you may start to grasp the horrifying power of this event. Had it happened here, well. It wouldn’t be a global extinction event, not quite, but it would’ve sucked mightily.

This image is important for a lot of reasons. For one, it gives us a nice high-resolution view of this scar, which changes every day — remember, it’s just dust floating on clouds, so we need lots of observations to see how it changes. From my calculations, the Wide Field Camera 3, which took this image, has a resolution of about 250 km (150 miles) at Jupiter’s distance, so it can see very minute detail.

Another reason this is important is it shows us that holy mackeral, Hubble still works! The WFC3 was just installed a few weeks ago, and NASA interrupted the calibration and checkout of the grand observatory to take these shots. Not only that, calibration isn’t finished yet, so these pictures aren’t even really at their best. You can expect even better things from Hubble and WFC3 in the coming weeks and months.

This could not have been an easy observation to get approved, take, process, and release, so my congrats to my friend Heidi Hammel and to the team of folks who made this possible. Well done! And very, very cool.