Hubble Catches One Galaxy Floating in a Cosmic City

Like NGC 1706, half of all galaxies live in some kind of group. 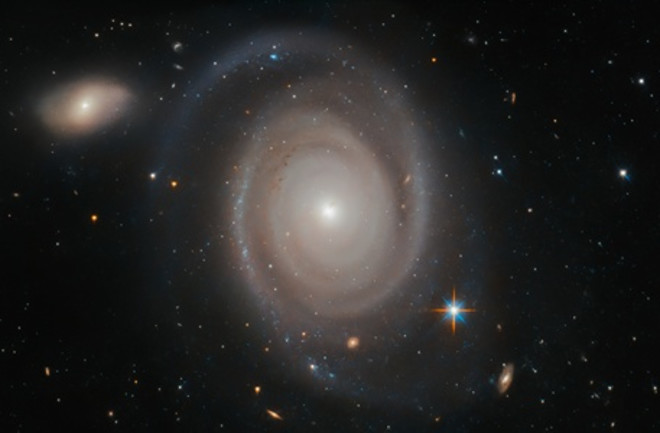 The universe is vast, with galaxies containing gas, dust, stars, and planets sprinkled throughout. But this sprinkling isn’t random; although some galaxies are indeed truly alone, most are not congregating through gravity.

NGC 1706, captured in this stunning Hubble Space Telescope image, is one of about 50 galaxies bound together in a group that lies in the direction of the southern constellation Dorado the Swordfish. The brilliant, face-on spiral and its neighbors sit about 230 million light-years away.

The universe itself is expanding, but galaxies can still exert gravity on each other. If you were to take a step back and view the universe from outside, you’d see that galaxies form clumps and strings, while leaving voids of vast nothingness in between.

About half of all galaxies can be found in some sort of grouping — in fact, galaxies and galaxy groups are the visible signposts marking what astronomers call the cosmic web. Astronomers believe this web of filaments, nodes, and voids, grew out of conditions in the very early universe as it expanded rapidly.

Galaxy groups are the smallest congregations of galaxies, like little towns dotting the countryside. They typically contain tens of members. Like NGC 1706, our own Milky Way and the neighboring Andromeda Galaxy are part of the Local Group, which contains more than 50 members.

Galaxy clusters are larger still, galactic cities typically containing thousands to hundreds of thousands of galaxies, like the nearby Virgo Cluster. And superclusters are the largest structures built of galaxies. These vast metropolises comprise several clusters, such as the Laniakea Supercluster, home to about 100,000 galaxies.