How You Think About Food Will Ruin Your Beach Body 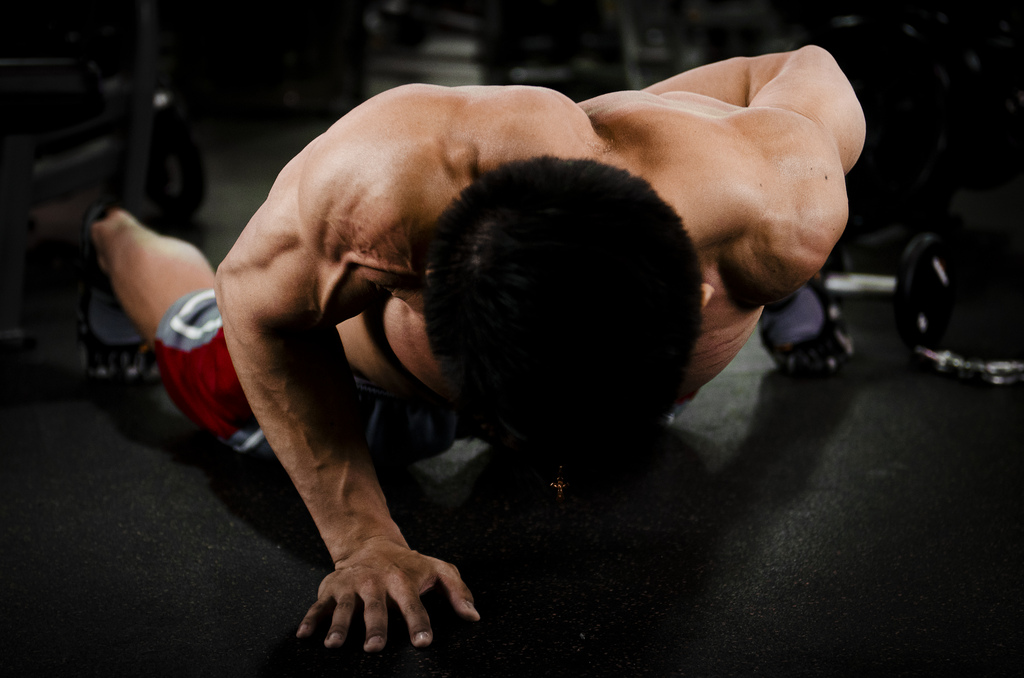 It’s summer time; do you know what that means? Time to accentuate the abs and cut the top off the muffin. If you decide to shape up, you won’t be alone. According to a number of estimates, Americans now spend 19 billion dollars a year on gym memberships. That’s a lot of yoga pants.

Hoards of runners, bikers, and weightlifters will hit the treadmills, trails, and benches seeking that elusive beach body. But however they decide to get “ripped,” most are bound to perpetuate a grand weight loss myth this summer—that you can lose weight simply by working out.

You can do all the crunches in the world and not get that washboard look you want, mainly because we are bad estimators when it comes to weight loss. First, we tend to overestimate how many calories we burn while exercising. 30 minutes on the elliptical won't even cover half a coffee shop muffin, for example. Second, we basically have no idea how many calories a meal has, underestimating by nearly 100% in some cases (especially for high-calorie foods). Both mistakes mean that we give too much credit to exercise and not enough to dieting.

Of course, exercise is good. A review of 25 years worth of literature found that the best weight loss programs combined both diet and exercise (with diet alone far outperforming exercise alone). But another reason that exercise isn’t a suitable weight loss strategy taken alone is that we also tend to compensate for our efforts and reward ourselves. When we overestimate the benefits of exercise, underestimate how many calories we eat, and overcompensate for a job well done, exercise is really a false protection from fattening food. Sunscreen has a similar problem with false protection. Sunscreen definitely helps, but it also encourages people to stay out in the sun longer and risk exposure that the protective goo can’t handle. Similarly, it's a mistake to think that you can reward yourself with a big pasta dinner after a three-hour run and still lose weight.

Besides being blind to the minimal weight loss benefits of exercise (if that is your only route), we seem to think exercise can mold fat wherever we want. Thousands of products on the market seek to shape women’s butts, thighs, and stomachs, and men’s arms, chest, and back. The reality however, is that so-called “toning” is a myth. You can do crunches all day long and you abs will indeed get bigger and stronger, but you will never see them. The only way to see the muscles you work so hard for is to lose weight globally—across your entire body. You know what that means: focusing on diet rather than exercise alone. The Suzanne Somers ThighMaster will not shape your butt or thighs unless you are losing weight from everywhere; you cannot selectively lose weight from one part of the body. Toning is a myth, time to flex it into oblivion. (For a fun read on other health myths, check out The Cure for Everything by Timothy Caulfield.)

In the hopes of making us better estimators, and to see just how critical diet is to weight loss, I made a graph (as I sometimes do with Star Trek drinking games). To bring the overestimates and underestimates in line, I brought the surprisingly high number of calories in some common pre/post workout foods into the same plot as the surprisingly low number of calories burned by some common exercises over time.

You’ll be surprised how few Oreos can throw an afternoon of activity out the window. 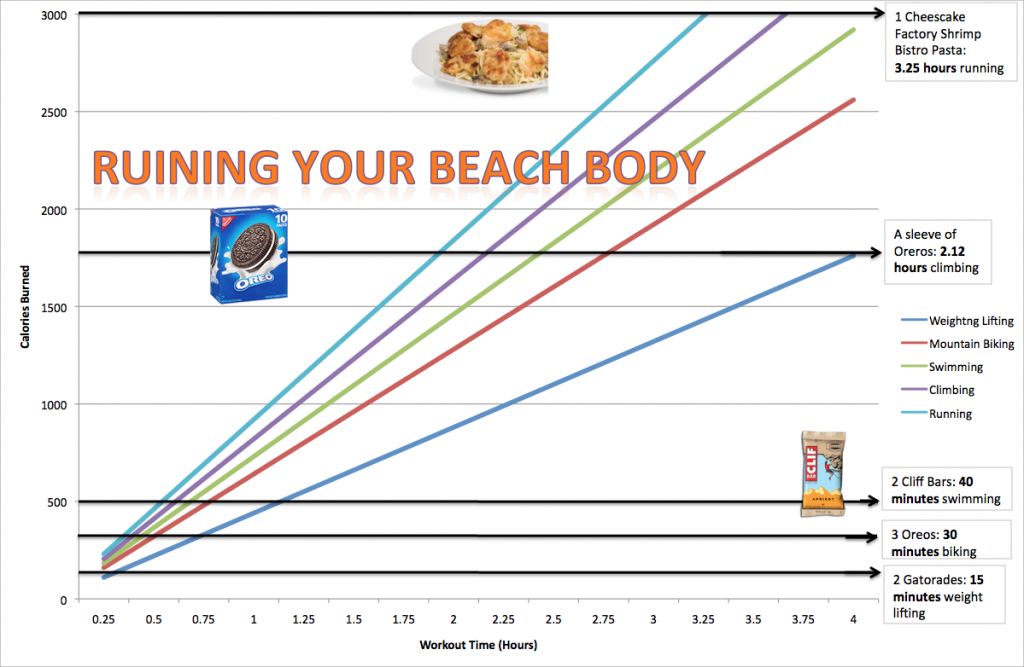 The colored lines on the chart show how many calories you burn over time doing exercises like rock climbing and swimming. The black lines show the caloric content of different amounts of Oreos, Cliff Bars, Gatorade, and a shrimp bistro pasta dinner.

You can ruin a 30-minute bike ride with three Oreos. A beastly three-and-a-half hour run is demolished by The Cheesecake Factory. That Gatorade you replenish your electrolytes with can quickly eliminate an entire power-lift workout.

Beach season is rapidly coming to a close, so while you try to wrestle your weight into submission, do the same for your concept of weight loss and "getting ripped." It’s no longer calories in minus calories out. Like other psychological quirks that guide perception or mold memory, we are biased calorie calculators who underestimate and unduly reward (and many of the calorie counts themselves are wrong). Shape up your mind, then shape up your body.