How Would We Save the Planet from a Killer Asteroid? 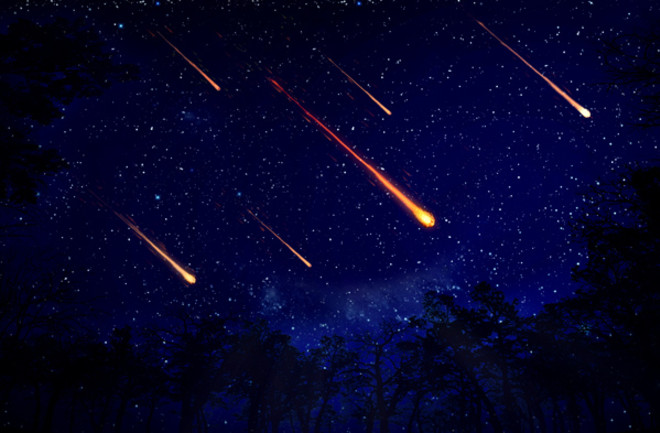 Meteors are both common and beautiful. But bright fireballs are much more rare. (Credit: NPS)

We don’t need to be scared of everything that falls from space. In fact, literal tons of space rocks rain down daily, though that’s mostly in the form of minuscule dust grains. But every 100 million years or so, catastrophe strikes in the form of a rock spanning miles.

The last one killed not just the dinosaurs, but three-quarters of all life on Earth. The effects on humans could be equally devastating — bomb shelters wouldn’t cut it in the face of such an event.

Not when the shaken Earth hurls tsunamis onto every shore. Not when volcanoes explode in angry retort. Not when the skies go dark with the asteroid version of a nuclear winter, dust and debris covering the sun. Even people who survive the first wave of destruction would inherit a world utterly destroyed. The world’s stubbornest creatures, the cockroaches and rats and tardigrades, would probably be fine. But the rest of us are doomed.

It’s a cataclysm of almost unthinkable proportions, but history tells us that it is indeed possible. Thankfully humans today have rockets and nuclear bombs and NASA. We can engineer a way out of this.

Back in 1998, Congress tasked NASA with identifying these killer asteroids, and expanded their demands in 2005. As it stands, by 2020 NASA is supposed to have identified 90% of asteroids 450 feet or larger — and they’re making good progress on that. So let’s assume we can spot an asteroid hurtling toward us — what’s the next step?

It turns out we have options, but our best bet is never to blow up the incoming object. Destroying a massive rock miles across is difficult work, and in the best case, you still end up with a cloud of small debris, which could still pose risks. So experts focus instead on nudging these asteroids out of Earth’s path.

Again, we know where most of these objects are. If they’re coming our direction, we’d likely have years of advance warning. And space is large and empty enough that a gentle nudge should be all that’s required to save the planet.

NASA's Near Earth Object Observations Program tracks asteroids. This is all the known objects of as January 2018. (Credit: NASA/JPL-Caltech)

NASA’s Near Earth Object Observations Program tracks asteroids. This is all the known objects of as January 2018. (Credit: NASA/JPL-Caltech)

Nuclear weapons are generally considered a move of last resort. They’re also technically banned by the Outer Space Treaty of 1967, but most people assume if the alternative is planet-wide destruction, the treaty can be ignored. And despite what the movie Armageddon may have described, you wouldn’t have to drill into the oncoming asteroid in order for a nuclear weapon to act as a deterrent. Simply exploding a bomb near the surface of the offending asteroid could be enough to alter its trajectory. This means rockets could deliver a nuclear payload without the need for humans to go anywhere near the impactor.

Large warheads can weigh up to a ton. But for all that weight, you get an explosion measured in millions of tons of TNT, enough to shift a sizable asteroid. And the behemoth rockets coming online now or in the next few years will be able to carry more than one of these warheads at once. By stuffing NASA’s SLS to capacity, one study calculates you could deflect an asteroid up to 800 meters in diameter.

Of course, just pushing is always an option. While less spectacular than a nuclear weapon, a physical shove doesn’t carry the potential of a payload exploding on launch and littering the Earth below with radioactive material, dooming us all anyway.

In this scenario, a space agency could simply run a rocket into an oncoming asteroid. We don’t currently have the rocket power to be as effective as a nuclear weapon would, but it is the simplest approach, which is attractive when you consider the stress and time constraints we’d likely be under should we find a large space rock hurtling toward us.

A spacecraft flying next to an asteroid could gently adjust its course due to the spacecraft's gravitational tug. (Credit: Dan Durda/FIAAA/B612 Foundation)

A spacecraft flying next to an asteroid could gently adjust its course due to the spacecraft’s gravitational tug. (Credit: Dan Durda/FIAAA/B612 Foundation)

The wonderful thing about space is that physics becomes a strange and idealized thing. If you imagine trying to tug a multi-million-ton rock out of the way on Earth, it seems nearly impossible. But in space, friction ceases to exist. Bodies move about as dictated by gravity. So, if you put something heavy near an asteroid, you can pull it off track.

This method happens slowly. It would only change the asteroid’s course at a rate of millimeters or centimeters per second per year. So you need a lot of lead time. But should we happen to find a monster asteroid out there heading toward us with a hundred years of lead time, this method is the safest and easiest way to deflect it.

As a reverse tugboat, scientists have also considered ion beam shepherding. This basically means having a spacecraft fly alongside the asteroid and pelt it with plasma, thereby shoving it aside. Of course, the spacecraft needs to be constantly pushing itself closer at the same time, or the “equal and opposite reaction” effect in physics would simply have the spacecraft pushing itself away in equal measure. Much like the gravity tractor method, this is slow but predictable and possible using technology that already exists.

Or, as a simpler version of that idea, other scientists have suggested simply painting an asteroid white to increase its reflectivity. This equates to more photons from the sun bouncing off its surface, and the extra pressure would serve to gradually move it off course.

There are other, more outré methods, as well.

We could blast it with a laser, for example. The goal here isn’t really to destroy the rock (though that would be part of it) but more to shove it with the laser and use the bits that flake off to help further propel the asteroid away from the laser. But since we don’t currently have a giant space laser, this method requires a bit more planning.

Another option is commonly called a mass driver. This takes the “equal and opposite reaction” to its logical conclusion. In its most basic form, imagine a catapult hurling rocks off of an asteroid. Physics dictates that as you hurl small boulders toward the Earth, the asteroid itself will slide away from us.

All of these methods require some advance warning. The good news is that asteroids large enough to end life on Earth are big enough to spot, so we’ll have plenty of time both to panic and to plan.