How We Tell if a Volcano Is Active, Dormant, or Extinct 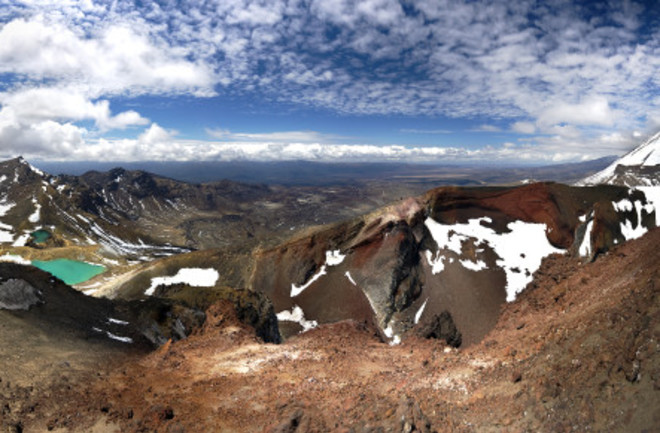 Tongariro (left) and Ngauruhoe (right) in New Zealand, seen from the Tongariro Alpine Crossing, November 2010. Jeff P. / Flickr | CC by 2.0 Yesterday, GNS Science in New Zealand declared that the volcanic unrest at Tongariro that started in 2012 is over. They lowered the volcanic alert status to Level o (background) and declared that Tongariro was back asleep (even if some steam might persist from the Te Maari vent). So, we can probably consider Tongariro "dormant" again after 3+ years of being an "active" volcano. However, it is surprising for most people to hear that there are no hard-and-fast definitions for what a volcano is considered active, dormant or extinct. Many times, what one person might think is an extinct volcano might actually merely be dormant and that transition is shades of grey, anyway. So, how do I differentiate between active, dormant and extinct volcanoes. This is my personal take (with input from the volcanological community) and to me, it's all about potential. If you have a different definition, feel free to leave that in the comments.

ACTIVE: Lava flows from the breakouts near Puʻu Kahaualeʻa on Kilauea, seen on June 30, 2015.

Active: This one is easy ... or is it? Any volcano that is erupting is considered active. That's a no-brainer. However, a volcano showing signs of unrest---let's say earthquake swarms, inflation, abundant degassing of carbon dioxide and/or sulfur dioxide -- that would be active as well. The USGS definition mentions that any volcano that has erupted during historic times could be considering "active". That last category I tend to call "potentially active" (and grades into "dormant") as they might not be showing any signs of current volcanic active above or below the surface. So, volcanoes like Kilauea or Sakurajima or Cotopaxi are active. So are places that abundant earthquake swarms are occurring, like Barðarbunga before the Holuhraun eruption. If there are clues that magma is on its way and an eruption might be in the works, that volcano is active.

DORMANT: California's Shasta, seen from Interstate 5, has not erupted since 1786. Little Mountain 5 / Wikimedia Commons | CC-by-SA 3.0Dormant: Now things get a little dicier. The USGS defines a dormant volcano as any volcano that is not showing any signs of unrest but could become active again. California's Shasta is a dormant volcano by that definition (although could be considered "active" by some because it has erupted in historic times.) Yellowstone is another "dormant" volcano, yet the level of constant unrest under Yellowstone might make it "active" by my definition. A truly dormant volcano by the USGS standards might be Clear Lake in California, which hasn't erupted in likely close to 10,000 years. I tend to think of any volcano that is no longer showing signs of volcanic unrest as "dormant", so Tongariro (mentioned above) is now dormant because magmatic/volcanic activity appears to have ceased -- at least any activity that reveals itself through geophysical means. The length of dormancy is tricky as well. A volcano could be dormant for tens to maybe even hundreds of thousands of years, provided there are some bouts of unrest that suggest it has the potential to erupt again. Remember, lots of volcanoes also have very active hydrothermal systems that circulate water from the surface to depth where they are heated up by cooling magma. Even if the volcano has hot springs, mudpots, even geysers, those are hydrothermal features, not volcanic. It takes a long time to cool a body of magma in the crust because (1) magma is hot when it intrudes, usually over 700ºC and (2) rock is a good insulator. A body of magma of decent size that feeds an eruption could take half a million to a million years to cool (and crystallize) to reach equilibrium with the temperature of the rocks around it. All that heat can drive a lot of hydrothermal action.

EXTINCT: An aerial view of Sutter Buttes, north of Sacramento in California. Phliar / Flickr | CC by-SA 2.0Extinct: It takes a lot to be an "extinct" volcano. The rule of thumb I use is about 1 million years since the last eruption ... and that's a long time! Sutter Buttes, just outside of Sacramento in California, is an oddity of a volcano in the Central Valley. It is likely related to the same source of magmatism as Clear Lake and Sutter Buttes hasn't erupted in ~1.4 million years. This means that Sacramento likely doesn't need to worry about the Buttes because they are extinct. This doesn't mean that a new volcano can't form in the same place. If you look at many volcanoes in the Cascades, such as Baker or Lassen Peak, they are built on the remnants of ancestral volcanoes that might be millions of years old. There seems to be evidence that once a volcano is established in one location, it is a preferred path for magma to use for millions of years -- but that might be in bursts of 500,000 years, then quiet for a million, then a new volcano. So that's my take on whether a volcano is active, dormant or extinct. If your volcano is making noise or popping off, then its active. If your volcano has erupted in the past but right now is quiet, it is likely dormant. If your volcano hasn't erupted in over a million years, you have yourself an ex-volcano. The distinctions aren't black and white, but you can begin to see how volcanologists view the lives of volcanoes.