How We Found Jupiter's 79 (At Least) Moons 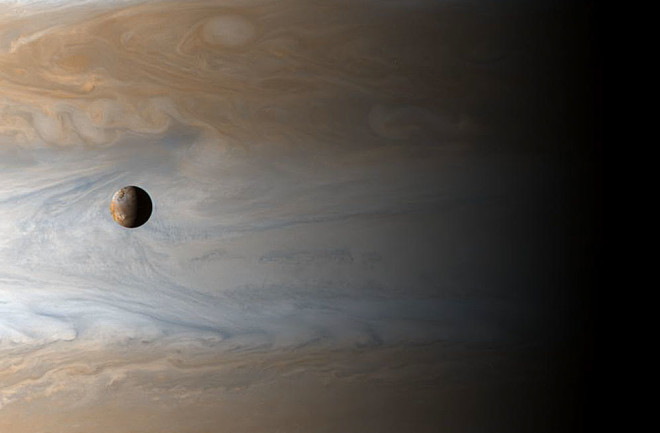 The moon Io is tiny compared to mighty Jupiter, but still among the easiest of Jupiter's many moons to spot. (Credit: Cassini Imaging Team/SSI/JPL/ESA/NASA)

Jupiter is king of the planets. It’s huge, it’s bright in our night skies, and even four of its comparatively tiny moons are bright enough to see with the most basic of telescopes. We’ve sent nine probes either into orbit or on a close flyby of the planet. And yet, as recently as this past year, we discovered not one, but twelve new moons around Jupiter, bringing the total to 79. How haven’t we exhausted this particular moon mine yet?

The answer is that most of Jupiter’s moons aren’t the grand companion that our own moon is to Earth, at nearly a quarter as wide as its host planet. The four moons first spotted by Galileo in 1610 — Io, Europa, Ganymede and Callisto — are big enough compared to our moon, but absolutely puny when compared to Jupiter, the planet they circle. And those are the easy targets. It makes discovering new moons against its bulk difficult.

It took the advent of photography before astronomers discovered any more moons around Jupiter, and the work over the next century or so was painstaking. By the time Voyager cruised by in 1979, the giant was up to 13 moons. Voyager added three to the count: Metis, Adrastea, and Thebe.

All three of these plus Amalthea (discovered in 1892 by famed astronomer E.E. Barnard) and the original Galilean moons comprise Jupiter’s regular moon group. This means they’re more or less spherical, orbit in the same direction that Jupiter spins and do so on well-behaved, near-circular orbits that don’t tip much out of the plane of Jupiter’s equator. In other words, what you probably imagine a moon to be.

The rest are the irregular moons, and these make up the vast majority of Jupiter’s satellites. These tend more toward potato shapes, and their orbits are often eccentric, tilted, or even retrograde, meaning they fly backwards to Jupiter’s spin. Most are probably captured asteroids or the results of long-ago collisions of larger bodies — perhaps past moons of Jupiter. They’re tiny and tend to orbit farther out from Jupiter than the regular moons. This makes them much harder to spot.

Astronomers found a few of these irregular moons. But after Voyager, the discoveries stopped for about two decades.

One of Jupiter's newest moons orbits prograde (normally), but since it's among the retrograde (backwards) moon group, it's probably marked for a deadly collision before too long. (Credit: Roberto Molar-Candanosa/Carnegie Institution for Science)

One of Jupiter’s newest moons orbits prograde (normally), but since it’s among the retrograde (backwards) moon group, it’s probably marked for a deadly collision before too long. (Credit: Roberto Molar-Candanosa/Carnegie Institution for Science)

And then Scott Sheppard appeared on the scene. The Carnegie Institution for Science astronomer’s teams are responsible for 60 of the 79 known jovian moons — all irregular, but still an impressive feat. Sheppard’s team has been discovering moons around Jupiter since 2000. Just this past year, they added a round dozen to the list. The new moons add to our understanding of Jupiter’s neighborhood and help astronomers understand how the planet formed and its surroundings evolved over time.

It is true, though, that some of Jupiter’s moons have been “discovered” more than once. These glorified space boulders are sometimes spotted in images but their orbits are poorly understood. So when astronomers look for them again in a few months or years, sometimes they turn up missing and have to be found again.

These irregular moons are quite tiny — only a few miles to tens of miles across. They bear little resemblance to the complex worlds of Europa and Ganymede, or even our own moon. Instead, they are mostly misshapen hunks of rock, orbiting far out from Jupiter’s bulk. So the telescopes that find them have to be sensitive, and either look at a large swath of space or get very, very lucky.

The probes we sent to Jupiter, while far closer than Earth-bound telescopes, are mostly busy looking at the planet. They, too, would have to get quite lucky to catch one of these tiny irregular moons by accident while trying to image the planet. And frankly? The possibility of finding one more tiny space rock doesn’t tempt scientists who want to understand the deep mysteries of Jupiter’s storms or interior. They’re not wasting precious mission time looking very hard.

Sheppard’s most recent successes actually came while he was looking much farther out, trying to find a possible Planet Nine far past the giant planet’s orbit. But since Jupiter happened to be in the same region of the sky, Sheppard and his team checked to see if they could find any photo-bombing moons in their images. They got lucky, though hard work went into the find as well.

Astronomers have gotten much better at wide-field surveys where they scan large chunks of the sky at once. Our telescopes, of course, have also gotten better. But mostly, you have to be willing to spend a long time looking for very dim objects to discover any new satellites around Jupiter.

Most individual irregular moons aren’t considered groundbreaking discoveries on their own (though a few weird exceptions exist). But taken as a whole? Jupiter’s rowdy brood of moons, regular and irregular, tell a long and interesting story about what life is like around the solar system’s largest planet.