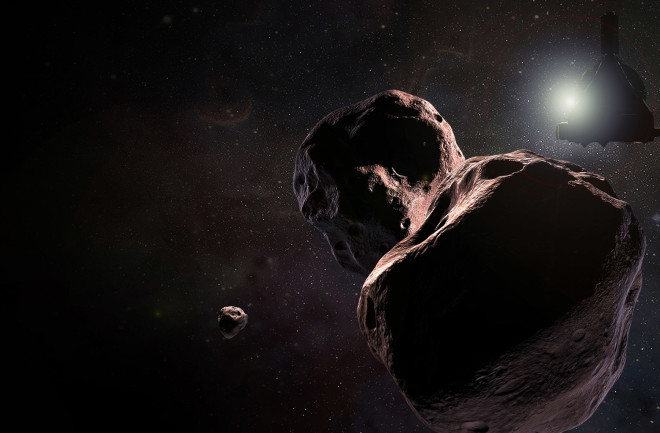 A New Year With New Horizons

This New Year's, you can go to a boring old bar like everyone else, or you can celebrate the dawning of another year by watching NASA's New Horizons spacecraft make history. At 12:33 a.m. EST on January 1, the craft will fly within 2,200 miles (3,540 km) of 2014 MU69, more commonly known as Ultima Thule, an object far out beyond Pluto in the Kuiper Belt. NASA will be broadcasting the event on NASA TV and providing updates through their social media channels. You can find more details through the mission page. <iframe width="560" height="315" src="https://www.youtube.com/embed/21X5lGlDOfg" frameborder="0" allow="accelerometer; autoplay; encrypted-media; gyroscope; picture-in-picture" allowfullscreen></iframe>

This will be the farthest object ever visited by a spacecraft, and New Horizons will come three times closer to Ultima Thule than it came to Pluto in 2015. The object is around 19 miles (30km) in diameter, shaped something like a peanut and is likely red in color. Ultima Thule orbits the sun about once every 295 years, and has likely been almost undisturbed since it was formed during the early days of the solar system, making it an exciting target for astronomers. The flyby will take place about four billion miles (6.6 billion km) from Earth. Because of this, radio signals carrying information from New Horizons to NASA's Deep Space Network will take more than six hours to make the trip, and we'll have to wait just a little bit longer to see Ultima Thule. The first (extremely) grainy images of the space rock will arrive by the afternoon of New Year's Eve as the spacecraft is still making its approach. They'll have a resolution of around 75 km per pixel, meaning the entire object will take up less than one pixel at that distance. The resolution will continue to increase as the craft approaches and, by the evening on January 2, the images will be 1.8 km per pixel. By New Year's Day, though, we should be rewarded with some fairly high-resolution photos of the trans-Neptunian object, allowing scientists and the general public to cast eyes on this ancient object at long last. Johns Hopkins University Applied Physics Laboratory will provide a live webcast of the event which can be viewed here. The webcast will include live coverage of the event including real-time flyby simulations. Additionally, coinciding with the spacecraft's close approach on New Year's Day, Queen guitarist and astrophysicist Brian May will release his new single "New Horizons." This will be May's first solo release in over two decades.