How to See This Weekend's 'Super Blood Moon' 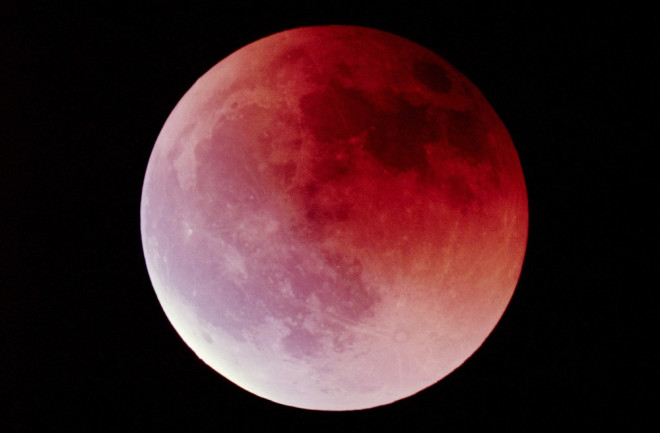 Earth's shadow will cover the Moon in shades of orange and red the evening of September 27, just as it did during this August 1989 eclipse. Credit: Bill and Sally Fletcher Every object in the solar system casts a shadow. Large objects, like Earth, create big shadows that can engulf entire worlds, even if those worlds loom bigger than normal. On the night of September 27/28, the Full Moon plunges through Earth’s shadow for the second time this year, and this time, it’s the biggest Full Moon of 2015. The resulting total lunar eclipse lasts more than an hour and occurs during the evening across the Americas.

How to View It

For most observers, a lunar eclipse begins when the Moon starts to enter the dark umbral portion of Earth’s shadow. This occurs at 9:07 p.m. EDT on the 27th, which is after moonrise in the eastern three-quarters of North America and all of South America.

For the next 64 minutes, the shadow creeps across the Moon’s face. Totality begins once the entire Moon resides inside the umbra at 10:11 p.m. Earth’s satellite should take on an orange-red hue — the light from all our planet’s sunrises and sunsets — until totality ends at 11:23 p.m. The partial phase wraps up when the Moon exits the umbra at 12:27 a.m. At mideclipse, the Moon lies about 40° high for East Coast observers and 10° from the West Coast. People in most of Europe, Africa, and the Middle East will see totality before dawn September 28. Planetariums and parks around the world are scheduling eclipse events, but of course if you’re part of the more than half the globe that will witness the event, your backyard should offer just as nice a view, no special equipment required. Simply step outside, and enjoy the Moon’s colorful show.

This story originally appeared on Astronomy.com