How to See 5 Planets Align in the Sky This Week 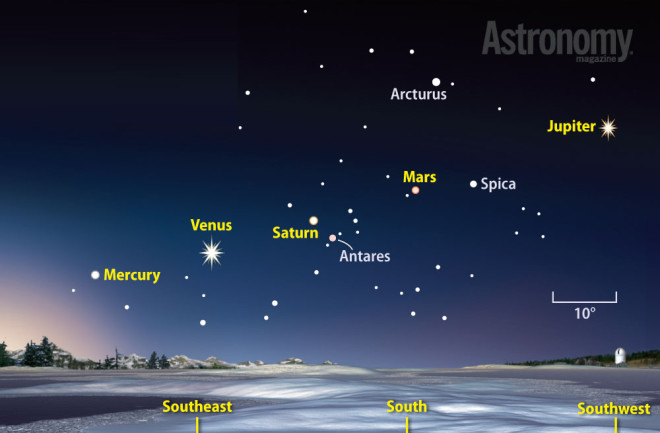 The alignment of the planets, as seen just before sunrise throughout the week. As the week progresses, the Moon will pass through this view of the sky. (Credit: Roen Kelly/Astronomy) Five planets adorn the morning sky this week — the same quintet of “wanderers” (Mercury to Saturn) our ancient ancestors recognized as being different from the background stars. Head outside about 45 minutes before sunrise and you will see the solar system objects spread out across approximately 110°. Start with Jupiter in the southwestern sky, then pick up Mars nearly due south, Saturn climbing in the southeast, brilliant Venus to its lower left, and lastly Mercury hanging low in the twilight. The view of the five improves over the next week or two as Mercury climbs higher and grows brighter.

By the time morning twilight starts to paint the sky, both Venus and Saturn appear prominent in the southeast. Venus shines brilliantly at magnitude –4.0 — the brightest point of light in the sky. Although Venus may be brighter, there’s no denying the charms of neighboring Saturn. The ringed planet shines at magnitude 0.5 and lies 15° to Venus’ upper right. When viewed through a telescope, Saturn shows a 16"-diameter disk surrounded by a stunning ring system that spans 36" and tilts 26° to our line of sight. The Red Planet has also now brightened considerably since the start of the New Year, shining at magnitude 0.8. Mars’ rapid motion nearly matches the Sun’s pace, so the world rises only about a half-hour earlier at January’s close than it did on New Year’s Day. Mars was a telescopic dud during 2015 because its diameter never exceeded 5.5". That starts to change in January because the planet pulls significantly closer to Earth. By month’s end, it appears 6.8" across and may start to show some subtle surface markings through larger scopes. Conditions will improve quickly this spring as Mars approaches opposition in May, when it will appear bigger and brighter than at any time since 2005. Mercury approaches Venus as this week progresses. The innermost planet stands 9° high in the southeast a half-hour before sunrise on the 31st, when you can locate it 7° to Venus’ lower left. It shines at magnitude 0.0 and should show up clearly through binoculars. Of academic interest only, Mercury passes 0.5° north of Pluto (invisible in twilight, of course) on the 30th. The waning gibbous Moon pokes above the eastern horizon around 9 p.m. (CDT) Wednesday, just a few minutes after Jupiter. The planet remains within a few degrees of the Moon from the time they rise until morning twilight is well underway. Shining at magnitude –2.3, Jupiter stands out even in the presence of our satellite, though it grows more conspicuous as the Moon moves over the next several nights. A telescope reveals the gas giant’s 42"-diameter disk and at least two parallel dark belts in its dynamic atmosphere. The Moon will then pass above the star Spica on Jan. 30, before approaching Mars on Feb. 1 and Saturn on Feb. 3. It sits above both Venus and Mercury on Feb. 6. The evening sky also hosts the outer two major planets, Uranus and Neptune, which were too faint for our forebears to see.