How to Revive an Old, Cold Planet

Images from the Mars Global Surveyor spacecraft strongly suggest the Red Planet was once balmy and inviting— and they are stoking the imaginations of scientists who dream of making it so again. Margarita Marinova, an aerospace engineering graduate student at MIT, has even worked out some key details of how to transform Mars into a habitable world. 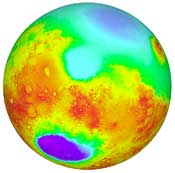 To thaw the frigid planet, Marinova and her colleagues sought the perfect greenhouse gas— one that is potent, benign, and easy to manufacture. They hit on perfluorocarbons, simple compounds of carbon and fluorine. These molecules seem safe to living things, they won't harm the ozone layer, and in the right combination they are a thousand times more effective than carbon dioxide at trapping heat. Just a few parts per million of perfluorocarbons in the air should produce enough warming to release a flood of carbon dioxide gas from the Martian polar caps and soil, according to Marinova. Then the thickening atmosphere will trap more heat, releasing still more gas.

Mars probably had a dense atmosphere about 4 billion years ago. The recent Global Surveyor snapshots capture layered sediments in low-lying regions around the Martian equator. Michael Malin of Malin Space Science Systems, who directed the analysis of the images, says the sediments may show where water once accumulated in craters, forming circular lakes. The raw materials for a warm, wet Mars may still be there.

"With just 20 to 30 degrees Celsius of warming, you would start a runaway greenhouse effect," Marinova says. Twenty perfluorocarbon factories on Mars, each powered by a nuclear reactor, could produce the necessary gases in a century. Such a scheme might cost hundreds of billions of dollars, but Marinova thinks future solar-system colonizers will consider that a good deal for creating a whole new world. "The numbers are big, but not big enough that you'd say forget it," she says. 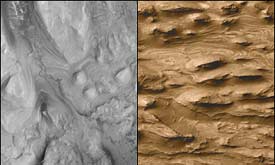