How to Make Anything Disappear 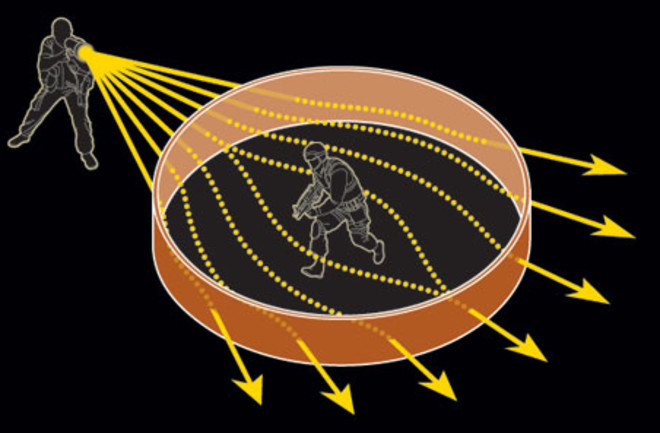 Invisibility cloaks are made of engineered materials that bend light and other waves around an object. Because no waves bounce back to the observer, the cloaked object (or person) becomes undetectable. | <a href="http://trevorjohnston.com">trevorjohnston.com</a>

Back in 2006 Harry Potter was all the rage in the engineering world. That year a team at Duke University built the first rudimentary device for hiding objects, akin to the boy wizard’s invisibility cloak. But in technology as in the movies, Harry Potter is now old news. Over the past six years, scientists have moved beyond mere invisibility: If they could build cloaks for light waves, then why not design materials to conceal sound and even ocean waves?

A whole suite of invisibility cloaks are now under development, all building on the same basic principle as the first prototype. When we perceive an object, we are actually detecting the disturbances it creates as energy waves bounce off it. The Duke cloak, constructed from a synthetic structure called a metamaterial, prevented those disturbances by bending light waves around the object, allowing them to continue flowing like water in a stream around a rock (concept shown at right). Sure enough, that technology is not limited to light. In the latest designs it is being applied to mask all kinds of other waves, with the potential for zeroing out sound pollution and protecting cities from earthquakes. Meanwhile, scientists continue to pursue the original invisibility concept—work that is sparking a lot of interest in military surveillance circles.

The Tech: A group of physicists led by Tolga Ergin and Joachim Fischer at the Karlsruhe Institute of Technology in Germany built a light-bending fabric last year that—for the first time—rendered a cloaked object invisible to the human eye from any viewing angle.

What It's Made of: A rigid synthetic polymer composed of tiny rods spaced about 350 nanometers (billionths of a meter) apart, a gap small enough to manipulate waves of visible light.

How it Works: As a test, researchers laid the cloak over a flat surface with a small bump in the middle. The cloak bent incoming light rays around the bump and bounced them back as if they had struck a flat surface. Observers would never know the bump existed.

Applications: For now, this cloak can hide only small imperfections on flat surfaces. But eventually, scientists hope to scale it up to conceal much larger objects anywhere in space. The U.S. Defense Advanced Research Projects Agency (Darpa) started investing in metamaterials way back in 2001, and while it doesn’t like to reveal specific intentions, the agency would certainly be interested in cloaks that conceal soldiers and military equipment.

What It's Made of: Stacked sheets of one-millimeter-thick perforated plastic (the actual engineering of these cloaks is difficult but unglamorous). The sheets’ holes and arrangement allow the cloak to manipulate sound waves.

How It Works: It hides an object much like Ergin’s light cloak does. Cummer placed the perforated sheets over a 10-centimeter-long block of wood. The cloak bent sound waves heading toward the block so that they avoided the cloaked area and rebounded as if it were not there. If the block had ears, it would not have heard any sound from outside the cloak.

Applications: Sonic cloaks could steer sound waves around beams and columns in a concert hall to give every seat perfect acoustics, or block the noise pollution from that chatty coworker in a neighboring cubicle. Such cloaks could also conceal submarines from the pulses of enemy sonar, although Cummer considers that a major challenge—he cannot just slap thick layers of plastic onto a military sub.

The Tech: Last February Sang-Hoon Kim at the Mokpo National Maritime University in South Korea and Mukunda Das at Australian National University presented a blueprint for seismic cloaks that could protect buildings from earthquakes.

What It's Made of: An array of giant concrete cylinders, 60 to 200 feet in diameter, each drilled with small holes to manipulate seismic waves. The cylinders would be installed underground, arranged to encircle a building’s foundation.

How It Works: Seismic waves propagate through the Earth much as sound waves move through air, so the concept is similar to the sound cloak. The difference is that engineers do not want merely to steer seismic waves around buildings, because doing so would end up inflicting damage on other structures. That’s where the thick concrete comes in: As the cylinders deflect the seismic waves, they would also absorb some of the waves’ energy and convert it into heat and sound. The cloaked building would vibrate barely at all, while the structures around it would experience a weakened temblor.

The Tech: Last year, Duke engineers Yaroslav Urzhumov and David Smith proposed a means of cloaking ships as they move through the water.

What It's Made of: A network of small water-deflecting blades and pumps encasing the bottom of the ship.

How It Works: As a ship chugs ahead, it drags water along with it and leaves a wake behind. Urzhumov’s contraption would scoop up water in front of the bow, steer it around the ship, and release it behind the stern. Water behind the ship would move at the same speed and in the same direction as at the front of the ship. The result: The ship would glide through the water without disturbing it.

Applications: Urzhumov says ships will not be getting fitted for cloaks for at least a decade, but the benefits are worth the wait. Cloaked ships could move faster, since they would encounter little friction from the surrounding water. They would also be harder to spot without a trail behind them. If that sounds like something that would make naval officers salivate, it is: The Navy helped fund the Duke study.

Adam Piore is a DISCOVER contributing editor. He wrote about time cloaking in April.