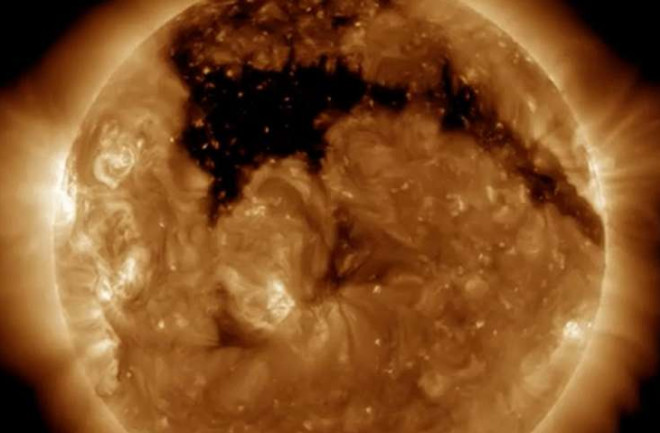 The fiery behavior of a star can be observed as sound waves. A pair of astronomers has built an AI network to better study stars using these sound waves. (Credit: NASA)

Using artificial intelligence (AI) and sound waves, researchers have found a possible means of looking inside stars. It's based on the fact that stars aren't solid objects — far from it, in fact. They're intense, vibrating balls of plasma held together by their own gravity and with wildly energetic nuclear reactions at their core. Now, researchers say that they're beginning to find ways to discern the internal state of a star by looking at the vibrations that propagate from its core through to the surface.

The energy in stars is constantly in motion. The extreme, high energy of a star's core is always moving outwards towards the cold, low energy of space. These sound waves resonate throughout the star, and smaller stars producer a higher pitch than larger stars, just like a smaller bell would produce a higher pitch than a larger bell. By studying a star's sound waves, researchers can tell how old a star is, how big it is, what it's made of and more. "Stellar sound waves are very similar to the symphonies in our concert halls here on Earth," Radboud University researcher and study co-author Luc Hendriks said in an email. "These sound waves are caused by starquakes. These quakes create sound with specific frequencies, just as flutes or guitars or pianos have specific “tones” and “overtones” (or harmonics). So from the tones, we deduce how big the star is, as the sound probes the size of the “concert hall”. So for us, a star is a gigantic 3D musical instrument, and its sound waves probe the physical conditions in its interior." Most recently, researchers have studied stellar sound waves using NASA's Kepler space telescope and NASA’s Transiting Exoplanet Survey Satellite (TESS). These instruments are able to observe and measure stellar sound waves by studying the brightness of the stars. Stellar vibrations reveal themselves visibly as brightening and dimming, so instruments like Kepler and TESS have been able to observe stellar sound waves by watching the stars twinkle. In its lifetime, Kepler observed the sound waves of tens of thousands of stars and TESS is expected to observe the sound waves of up to one million red giants. Using sophisticated computer models, Hendriks and Katholieke Universiteit Leuven astronomer Conny Aerts think they've found a brand new way to use these stellar vibrations to see what's going on inside stars.

Hendriks and Aerts fed simulations of star activity, created using computer models that collect and synthesize information about stars, to an AI network. The network absorbed this stellar information and found relationships between internal variables like stellar mass, age and what elements the stars contain and the vibration patterns visible on their surfaces. The network then takes this information and applies it to real stars. This allows the AI to take real-life stellar sound wave data and compare it to the simulations to discern some of the internal characteristics of a star. This AI will be a new tool for researchers studying stars through their sound waves. It is even possible that the AI might be able to analyze raw stellar sound wave data quicker than a human. But, this star-analyzing AI network is still very new, and hard results are still to come. The researchers' paper on the technology is posted on the pre-print server arXiv at the moment, and has been accepted to the technical journal of the Astronomical Society of the Pacific, but it has not yet been peer-reviewed.