How to Forecast the Weather from a Half-Mile Underground: Watch for Muons 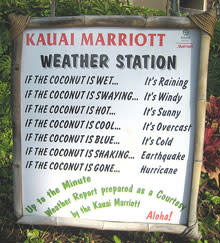 Most normal people gauge the weather by checking online, hitting up the Weather Channel, or falling back on that old standby, looking out the window. But one group of physicists refuses to toe the line, instead predicting local temperatures to within 1°C by checking a particle detector that resides almost half a mile underground. Spending a lot of time way, way beneath the surface of the earth can do this to a person. The detector, located in a former mine turned particle physic lab in Minnesota, was built as part of a project to study neutrinos, but it can also detect other particles known as muons. When high-energy cosmic rays from outer space collide with atoms in the Earth's upper atmosphere, particles called pions are created, which quickly decay into muons. Muons are negatively charged—sort of like heavier versions of electrons—and many have enough energy to penetrate underground. Muon levels drop in cool weather because cold air is denser, and pions are more likely to get destroyed by colliding with atoms before they have a chance to decay into muons. Daily temperatures in the stratosphere, which affect weather in the lower atmosphere, can be tracked with the particle detector, the researchers say. Although some experts doubt that muon meteorology could challenge the precision of current weather forecast techniques (which rely on balloons and satellites), researcher Scott Osprey says bigger detectors would mean more precise predictions. "The only limitation is the size of your detector," he says. Related Content: DISCOVER: The Biggest Weather Control Flubs in History DISCOVER: Can You Hear Meteorology DISCOVER: Mining for Dark Matter DISCOVER: Nailing Down Gravity