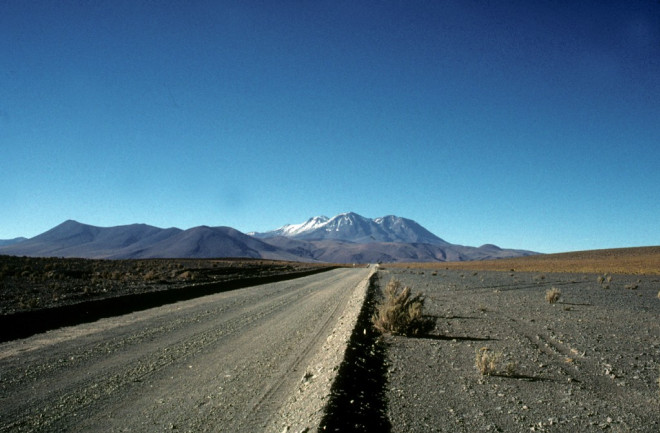 Our first approach to Aucanquilcha, my thesis volcano in Chile. Erik Klemetti

So, a few weeks back I got to tell a story about my experience as a geologist as part of a Story Collider show here at Denison. Let me tell you, it was an awesome experience, to share about what I've done as a scientist. At some point, I'll be able to link to video and/or audio of my storytelling, but for now, I thought I'd share the story I wrote. Hope you enjoy it.

---- It was a snowy day in Philadelphia when it all started. I had graduated from college 8 months prior and was writing about Thomas Paine for a living because somehow my history rather than my geology degree got me my first job. That day, I was working at home when the phone rang. When I answered, on the other end was Dr. Anita Grunder from Oregon State University. I had applied for graduate school in geology hoping to work with her because she studied volcanoes and in South America, exactly what I hoped to do. See, I grew up in the shadow of volcanoes at my grandmother’s house in Colombia. Anita asked “So, you want to work on a project in Chile?” … and that was it, I was hooked and that was my future, ready or not. Six months later, I was waiting to board a plane to explore Aucanquilcha, a monstrous volcano taller than Denali in the middle of the high Andean desert. I had no idea what I was getting myself into. I remember thinking on the 11-hour flight to Santiago that I was headed by myself to a place I’ve never been to meet up with people I’ve never met and do stuff I’ve never done, while collecting the rock I needed for my Ph.D., all at great expense to my brand-new Ph.D. advisor. I had done fieldwork as an undergrad, but that was on a lovely stretch of Maine coast, a house and bed each evening, even feasting on lobster, with help along the way. This time, I was on my own to get my rocks … and the right rocks … and this might be my only shot. Go, collect all the rocks and fieldnotes I might ever need, don’t perish. Everything else I was making up as I went. After meeting up with our driver/cook Jorge and two colleagues from Montana State, we headed to Calama to get our supplies for the month. I was not prepared for this kind of purchasing. We first headed to the bakery, to get a garbage bag full of rolls. Literally. Jorge, this 6" 5' Chilean, just walked in, pulled out the bag, gave the baker a big grin and started shoveling bread into the bag. That would be all the bread we’d eat for a month, even after it metamorphosed into hockey pucks. Meat, fruits, box wine, mate de coca, 50-gallon drum of fuel, all the water, a few bottles of pisco to bribe the military police. So. Much. Stuff. You aren’t popping back to the shops if you realize you forgot something later. I crammed myself into our truck next to the garbage bag of bread and off we went. The drive from Calama to Aucanquilcha was one of the most spectacular I have ever experienced. You start in the middle of the desert and suddenly you realize you are surrounded by volcanoes, everywhere. I recall twin massive volcanoes that rising from a valley filled with deposits from in a gigantic explosive eruption, all frosted with the dark lava flow from a little cinder cone. A volcanic Disneyland.

A visit from a local resident while we were in Amincha. The volcano in the background is Ollague, with a wispy steam vent near the summit. Erik Klemetti After a few hours, we arrived at the Salar de San Martin, a massive salt flat. At that moment, Aucanquilcha, came into view. The volcano became real, off in the distance, larger than anything around it. I was going to need to figure out this volcano: it's history, its secrets, why it was there. I also had to survive doing it on this 20,000-foot behemoth, with no climbing experience beyond the odd hike up the mere bumps in New England. I was equally excited and absolutely terrified. We set up our 1960’s surplus canvas tents and got ready for the first night in the deep dark night of the high desert of the Andes. Setting up camp at high altitude left me feeling a bit overconfident. The first day in the field proved that wrong. My backpack was full of rocks because that’s what geologists do: spend all day hiking and add 20 pounds to your backpack. Did I mention that earlier in the day, my boots split across the soles, so I had to duct tape them back together? Hiking up that slope back to camp, that’s when the fear crept in: was I insane to think I could just drop into the high Andes and do field work with little to no training? I had a good job in Philadelphia. Instead, here I was, with a pile of rocks on my back in duct-taped boots on the first day, thinking I might perish in the Andean desert. All I wanted to do is sit down, take off my pack and question my life choices. After about a week, we moved to our highest campsite, at over 17,000 feet, so imagine camping on the summit of Mt. Rainier … and go up another 3,000 feet. At the time, I thought it was the best thing ever because that first night the setting sun caught the side of the volcano, turning it this brilliant deep pink. But, at this elevation, things get weird. Each day would start at a dead calm but by sunset, the wind would be whipping so we would huddle around propane lamps in the kitchen tent, go over notes, play dominoes and listen to cassettes. It would get so cold at night that, even in a massive sleeping bag and our clothes, including a wool hat and jacket, we would each bring a Nalgene full of hot water into the sleeping bags. I would keep my contacts in my tent and find them partially frozen in the case.

A view towards the summit of Aucanquilcha. You can see the sulfur (yellow) along with the old mining road zig-zagging across the slope. Erik Klemetti I remember lying in my sleeping bag at night listening to the wind flapping the canvas tent despite the duct tape I had put on the poles in a vain attempt to stop the incessant noise. I tried to drown it out with the Jesus & Mary Chain on my Walkman and thought “what am I doing here?” Was I wasting everyone’s time and money? Was I not collecting the right samples? Was I going to break my leg and be left to mummify? This whole experience was so much more extreme than anything I had ever done. If this what is was like to be a geologist, maybe I wasn’t cut out for this lifestyle, risking life and limb for piles of rocks. All of this was leading me towards the biggest challenge: collecting samples from the summit of Aucanquilcha. We drove up to the remnants of a cable car system that transported sulfur from the summit of the volcano and right next to it was … a soccer field … at 18,000 feet. This used to be the highest permanent human settlement on Earth. How bad could it be if Bolivian miners would play soccer up here, right? We kept driving up the dusty road that zig-zagged across the volcano’s sulfur-covered face until the road ran out ¾ of the way up. We had to hike the rest of the way. The average person might think it should require training and oxygen to summit a 20,000-foot volcano. Not geologists! We’re just there to get rocks. My colleagues seemed to skip up the mountainside and Jorge, he was smoking as he hiked. Yet here I was, trudging up the slopes towards the summit, a sulfury breeze blowing the thin air. It was unbelievably painful in an unbelievably beautiful setting.

A view from near the summit of Aucanquilcha, with the mine works and cable car line visible in the foreground. Erik Klemetti Take a step, look up, see the summit no closer than before. Take another step. Why is this worth it? I must really love volcanoes. Take another step. Who cares if I just stop now and say “nope, not for me”? Another step. At this pace, I might never reach the summit and Anita will drum me out of grad school. Another step. Closer … to what? More rocks? Every heartbeat reverberated in my chest, lights danced in my eyes. I remember one of the few words of warning Anita gave me before I left: “there’s this thing that happens to men sometimes where their heart explodes at high elevation. Avoid that.” Nice. Far off in the distance, I could see the dust from a massive copper mine, the closest any doctor might be. Not comforting. No rock is worth that sort of risk, right? This is not what normal people do. But there I was, untrained and unoxygenated, attempting to summit a volcano to collect those precious samples. I didn't care what happened next — as long as I conquered this volcano and I could go back to Oregon with the rocks to prove it. I might never want to do this again without the proper gear and preparation, but it would be done. I’d get the rocks. Maybe, just maybe, this would all work out … and let me tell you, no one in the history of the planet has enjoyed lying in a pile of sulfur more than I did that afternoon with a bag of rocks from the summit sitting next to me. And I would have more moments terror about my career choice, like when I spent two spring breaks running samples for 16 hours a day and accidently broke the furnace, shutting the lab down for 3 days. Or maybe when I gave my first talk about Aucanquilcha at a big international meeting and misidentified minerals from these samples I’d just collected. These moments put a pit in my stomach to this day. Yet, that month in the Andes began the process of making me believe I could survive as a geologist, knowing that matter what it threw at me, I would make it.