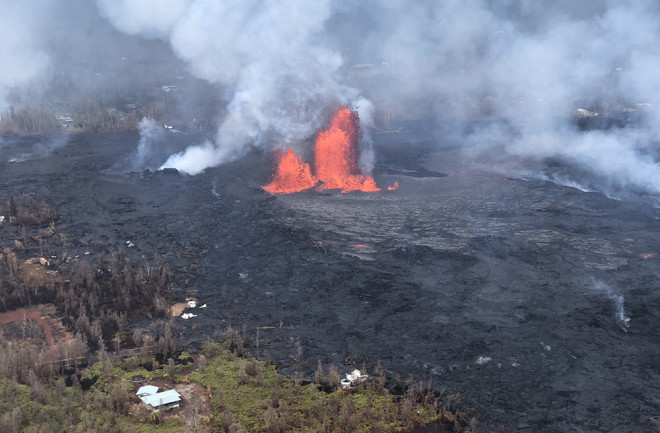 The lava fountain from Fissure 8 seen on May 28, 2018. USGS/HVO. Few things are changing volcano monitoring and hazard planning more than drones. A decade ago, it either took expensive and dangerous helicopter flights or approaching eruptions on foot to get close enough to make observations. Today, we can watch volcanic eruptions and their results up close using relatively cheap drones that can fly into craters and over lava flows to see what's happening. This provides vital data for volcanologists watching the volcano to understand how the eruption is changing. They can also be used to map volcanic deposits and find people who might be in peril due to volcanic activity. Paired with satellite monitoring, drones are making the job of watching volcanic eruptions safer for scientists and citizens. Case in point: The recent events at Kīlauea. Earlier this week, fast moving lava flows from Fissure 8 (see above) prompted more evacuations of residents who had not left their homes so far. These new flows were discovered by a drone that was mapping the flows for the U.S. Geological Survey. When it was clear that the flows would potentially block escape routes, the survey team contact emergency managers so they could warn citizens.

Drone footage used to help find a resident from the Kīlauea lava flows. The glow at the top is the lava flow and the beams from searchers' flashlights can be seen near the house. USGS/HVO. It turned out that a resident was rapidly becoming trapped by these new lava flows. The USGS team was able to find the resident with the drone and have them follow it out of the lava flows and vegetation to safety. Think about that: A drone used to map the flows then used that data to help guide a resident from the hazard zone! Not only that, but the drone was able to send real-time images and video of the lava flows to emergency responders to help them more efficiently help residents and know where to send people as the evacuation progressed.

“Follow the drone to safety.” USGS UAS mission in Kīlauea volcano’s lower East Rift Zone on 5/27/18 helps guide evacuations and leads to the successful rescue of a resident after a lava pond outbreak sends a fast pāhoehoe flow down Luana Street. https://t.co/S3nUtwYMdMpic.twitter.com/kpfjQI9pOX

, with lava flows from Fissure 8 that moved at ~550 meters (600 yards) per hour -- and that's pretty fast for a lava flow. Fissure 18 is also producing a slower moving lava flow as well. Lava flows are (thankfully) not the most dangerous volcanic hazard because even at that speed, people can get out of the way if they have some warning (because you definitely don't want to fall into lava

). The lava fountaining from Fissure 8 has also produced some impressive deposits of Pele's Hair (see below) as the lava is thrown into the air.

#UPDATE "Pele's hair and and other lightweight volcanic glass from high fountaining of Fissure 8 are falling to the west of the fissure and accumulating on the ground within Leilani Estates." Info: @USGSVolcanoes#Kilaueapic.twitter.com/0I3CEA7e5J

Like I've said before, this eruption at Kīlauea has shown off some of the great science and technology used by the Hawaiian Volcano Observatory