How the Sun's Corona Gets So Hot

The phenomenon of "solar braiding," hypothesized 30 years ago, has now been validated by images from an orbital telescope. 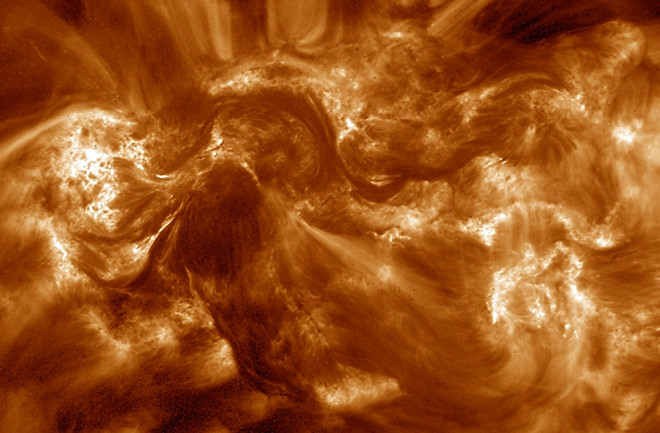 The High-Resolution Coronal Imager (Hi-C) captured a range of solar activity, including the first observations of “solar braiding.” | NASA

The solar corona, our sun’s energetic atmosphere, has long baffled scientists who don’t understand how it gets all that energy. “We call it the coronal heating problem,” says Jonathan Cirtain, an astrophysicist at NASA’s Marshall Flight Center in Huntsville, Ala. “Why is the surface of the sun 6,000 Kelvin while the corona is 7 million Kelvin?” Cirtain and a team of researchers have helped solve the mystery using the highest-resolution images ever taken of the corona.

In July 2012, the researchers launched a telescope less than 10 inches in diameter — dubbed the High-Resolution Coronal Imager, or Hi-C — 174 miles above Earth. The Hi-C spent only five minutes observing the sun before parachuting back to White Sands Missile Range in New Mexico, but it yielded remarkable results. The team captured images of “solar braiding,” the transfer of energy from the sun’s magnetic fields to the corona, theorized in 1983 but never observed.

Solar braiding is also known as “Parker Braiding” after Eugene Parker, the astrophysicist credited with weaving the theory together, Cirtain says. Parker, 86 and retired, says it’s gratifying that his 30-year-old theory has finally been observed. “I always hoped the resolution would creep up on this thing,” Parker says. He adds that the new study may help researchers understand not just our sun, but other stars.

[This article originally appeared in print as "Understanding the Sun's Energy."]