How the "Gooey Universe" Could Shed Light on the Big Bang 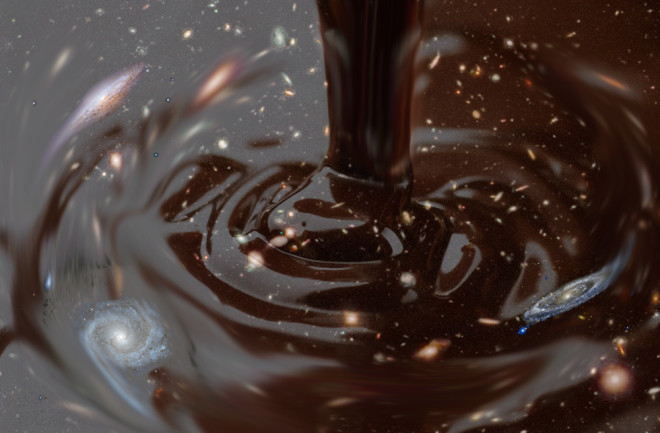 Calculations of the density of stars, planets, gas clouds, and empty space indicate that the cosmos has the viscosity of chocolate syrup. “Interdisciplinary” is a huge buzzword in academia right now. But for science, it has a long history of success. Some of the best science happens when researchers cross-pollinate, applying knowledge from other fields to inform their research. One of the best such examples in physics was the concept of a Higgs field, which led to the 2013 Nobel Prize in physics. Few people outside the physics community know that the insight to the behavior of the proposed Higgs particle actually came from solid state physics, a branch of study that looks at the processes that take place inside condensed matter such as a superconductor. Now cosmologists are trying to borrow some ideas of their own. The new discovery of gravitational waves — the biggest news in cosmology this century — focuses fresh attention on a field in which recent progress has otherwise been slow. Cosmologists are now attempting to explore novel ways of trying to understand what happened in the Big Bang, and what, if anything, caused the gargantuan explosion believed to have launched our universe on its way. To do so they’ve turned their attention to areas of physics far removed from outer space: hydrology and turbulence. The idea is pretty clever: to view the universe as an ocean.

Science understands much about the flow of gases and liquids, in which turbulent behavior is common. This knowledge allows us to fly airplanes, guide submarines, forecast the weather, and plan irrigation systems. Cosmologists’ idea is to use these physical laws to explore how the universe expanded from the Big Bang to its current state. The first bit of data required for a hydrological model is, of course, what the material is that’s flowing. By looking at the average density of the universe (averaging the highly-packed centers of stars with the density of gas clouds and that of empty interstellar space), and assuming that the universe as a whole has this average density, cosmologists have asked: What does the universe resemble? The surprising answer, obtained from calculations of the density of stars, planets, gas clouds, and empty space, is that the cosmos has the viscosity of chocolate syrup. With this information in hand, cosmologists can then try to trace the universe’s movements backwards in time. In hydrology and related subjects, the evolution of a fluid is determined by modeling its flow using differential equations. These equations must have initial conditions, from which the process starts, with the equations then determining what happens to the system — the flow of the fluid — over time. In the case of the entire universe, the initial conditions would be the Big Bang. So cosmologists want to estimate the governing differential equations of the entire process — the equations that govern universal expansion, as well as changes in viscosity such as the formation of galaxies — and then follow the equations back in time to find the conditions that existed 13.7 billion years ago. If the exercise works, it may reveal the nature of the Big Bang.

Some modest progress has already been made using this approach, with theoretical physicists able to begin to estimate some parameters of a cosmos viewed like a vat of chocolate syrup swirling through time. The approach, called "effective field theory," was inaugurated only two years ago, and the fact that it is already leading to some preliminary results is encouraging. Sean Carroll, one of the cosmologists involved in this work, recently explained that the idea is to understand the scale of various processes. The things that happen on a small scale in the universe may be "bundled up into one big effect," he said. The small-scale gravitational attraction of objects in the universe is viewed as the viscosity of a fluid, simplifying the complex physics at work. In a sense, looking at the universe as a fluid is a big-picture way of modeling all the gravitational attractions of the smaller parts of the very large whole we call the cosmos.

The key to the model's success is the quality of astronomical data available to theoreticians. As time goes on, astronomers’ data improves, allowing better estimates of the overall viscosity of the universe. The better the estimates of data relevant to the entire universe, the better cosmologists and physicists will be able to follow the eddies and vortexes in the "chocolate syrup" universe as they evolve through time. Scientists hope that the new method may yield some good results in a decade or two, and in particular shed more light on one of the most prominent theories in cosmology: cosmic inflation, a theory proposed in 1980 by Alan Guth, and substantiated with observations earlier this year. Most cosmologists and astronomers are now convinced that the theory is correct and that the universe experienced an early period of exponential growth, which ended at some point. But the parameters of this model are still not known with precision, and how inflation starts and ends is a persistent mystery in physics.

What Caused the Big Bang?

The "effective field theory" approach can possibly be taken even further — perhaps shedding light on what caused the Big Bang itself. To understand why, you first have to examine turbulence itself. Turbulence can be either classical (as in the present approach to cosmology), or quantum. In quantum turbulence, the vorticity is quantized: it can only assume certain quantum levels of energy. Think of a tornado that can only spin around at precisely-specified angular speeds, without ever taking any angular velocity in between them: say, the winds at 100 feet from the eye of the twister can move at only 80, 100, or 120 miles per hour and all other speeds are prohibited. Quantum turbulence occurs in superfluids, such as liquid helium, at a temperature barely above absolute zero. Can we get a glimpse of the Big Bang through this kind of a milieu? The Big Bang is believed to have been a quantum event. Because the entire universe was somehow "condensed" into a space the size of a tiny particle, quantum mechanics had to have played a powerful role in its evolution through the Big Bang. We know that the temperature of the Big Bang was in the many trillions of degrees range, and the universe has been cooling since then, to its present temperature (the cosmic microwave background radiation) of 2.73 degrees Kelvin. But, was the pre-Big Bang temperature absolute zero or thereabouts? If so, insights from a Bose-Einstein condensate, a quantum system that exists at close to absolute zero, may be valid. And could a quantum vortex materializing in this setting have caused the Big Bang?* By studying the properties of quantum vortexes, cosmologists may gain insights about this mysterious event. And hydrological models of the universe’s evolution may someday reveal how a quantum tornado twisting in a primordial icy medium exploded into the "chocolate syrup" universe we now inhabit. _____________________ *This is my own speculation.